Why does my ocarina have airy high notes?

Ocarinas can have airy high notes for a number of reasons, commonly dirt in the windway and not blowing hard enough. It's also a symptom of badly made ocarinas.

You may not be blowing hard enough

A very common reason that an ocarina will have airy high notes is because you are not blowing hard enough. As holes are opened, air can escape the chamber. To compensate for this, you must blow harder or the tone will become more and more airy.

The windway may be blocked

If your ocarina has suddenly become airy, this may be due to dirt in the windway; dirt can build up over time, and insects may also crawl into the windway. Any obstruction in the windway is a problem as it will create turbulence and increase airiness.

You can clean the windway by folding a strip of paper and pushing it through. Note that wind-ways are normally much larger at the mouthpiece end than the voicing. If your paper gets stuck, reduce the number of folds—don't force it through. For larger obstructions, you would be better off pushing the paper through from the voicing end.

You may be blowing into the windway at the wrong angle

How you blow an ocarina has a significant impact on the tone you get from the high notes. It's important to hold the ocarina so the air flows directly into the windway without a 'kink' at the lips as this creates turbulence. 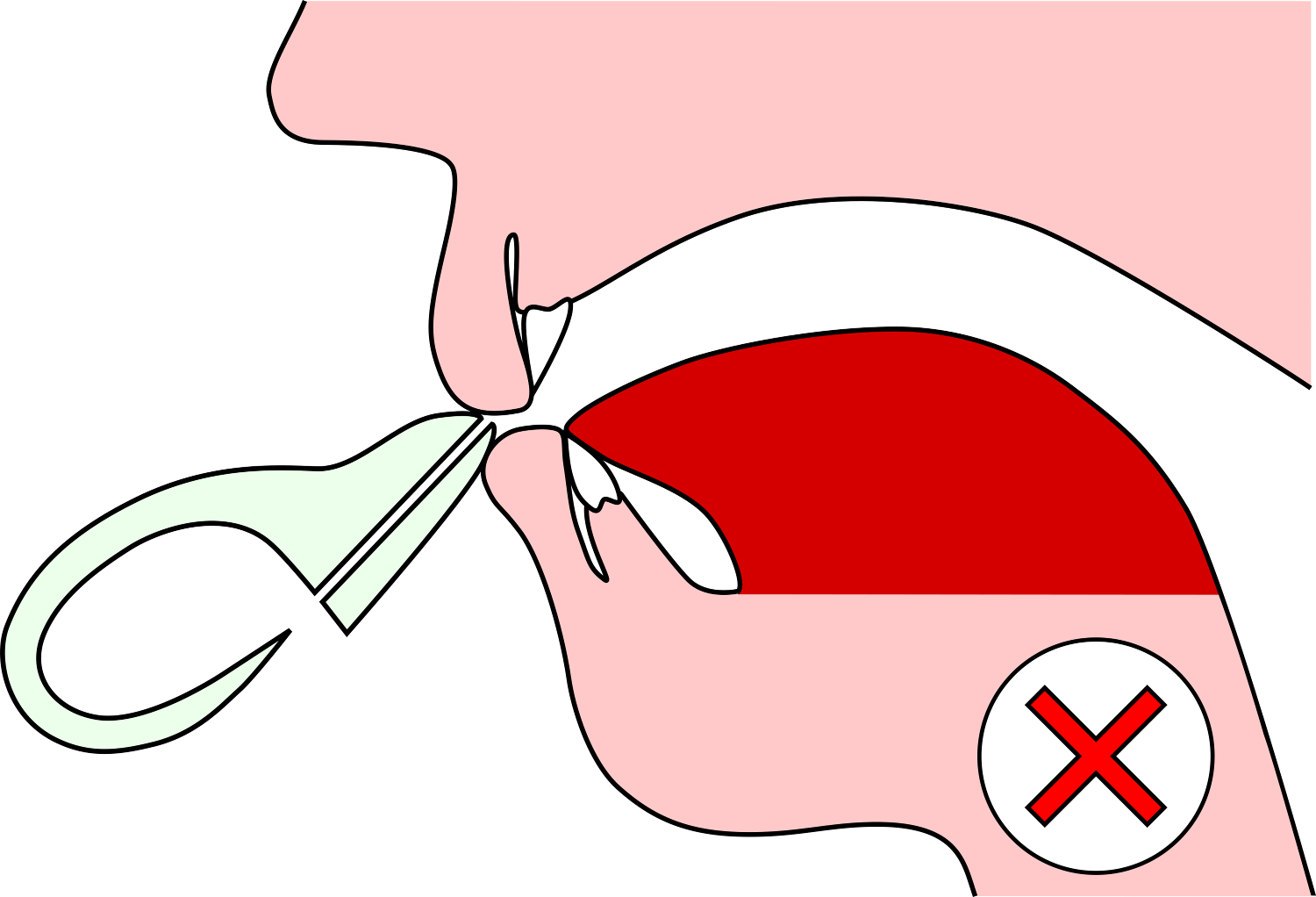 You may have a bad ocarina

If your ocarina still sounds airy after checking the three things mentioned above, there is a very good change you have a badly made ocarina.

Unfortunately ocarinas are often made as decorations / novelty items which are not designed to play well. The page 'Evaluating ocarina quality' will tell you what you need to identify ocarinas designed as serious instruments.

It really is not worth skimping, as a bad instrument makes your job as a player much more difficult. In relation to other instruments good ocarinas are not expensive.

You may have run across the 'acute bend' from other sources, a technique which purportedly improves the sound of an ocarina's high notes by shading the ocarina's voicing against your chest.

I believe this is an acoustic effect that increases the perceived loudness to the player by bouncing sound off their chest into their ears.

From what I've observed of others doing this in person, it makes little difference to an observer's perspective. It can actually sound worse as the sound coming from the voicing is directed downwards, away from the audience.

I do not recommend using this technique as it is ergonomically awkward and looks silly in a performance. Any ocarina marketed as 'needing' this technique is a bad instrument.

You may be shading the finger holes

Even if a finger hole is open, there is a notable distance where the presence of a finger will 'shade' the hole, causing the ocarina to play flatter than it should. If you blow harder to compensate, the increased airflow makes the ocarina sound more airy.

Watch yourself playing in a mirror and make sure you are not doing this. To check how the high note sounds under optimal conditions, play it it while holding the ocarina by its ends so no fingers are close to the holes. 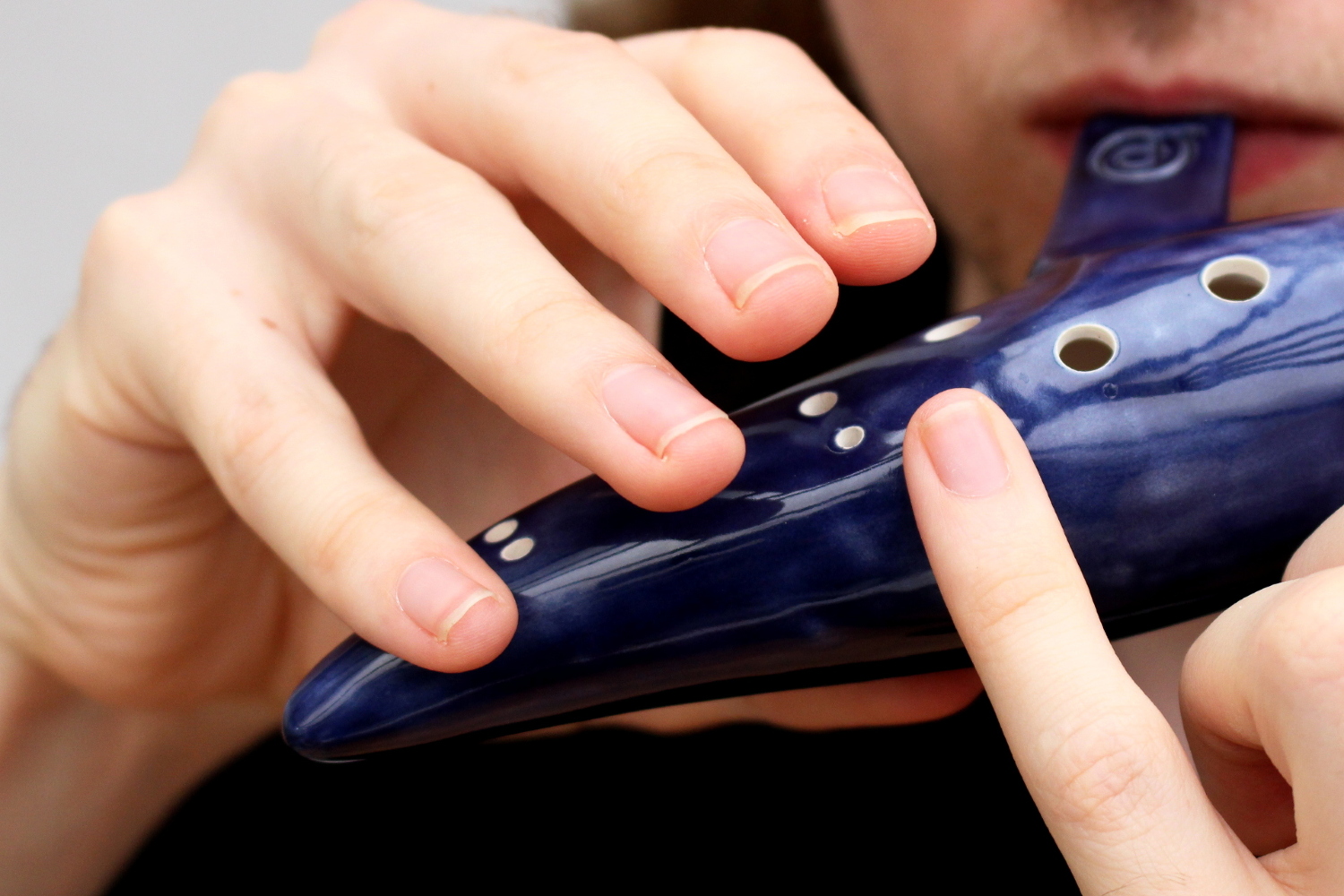 Your palm may be in the airstream

As you play higher notes, you blow harder. If this fast-moving air hits your left palm, it makes a noise. Consequently, you should keep your hand out of the air-stream when playing the high notes.

If you're playing using the 3 point grip, an easy way to do this is to open the pinky hole by rotating the left hand from the wrist, pivoting on the index finger. 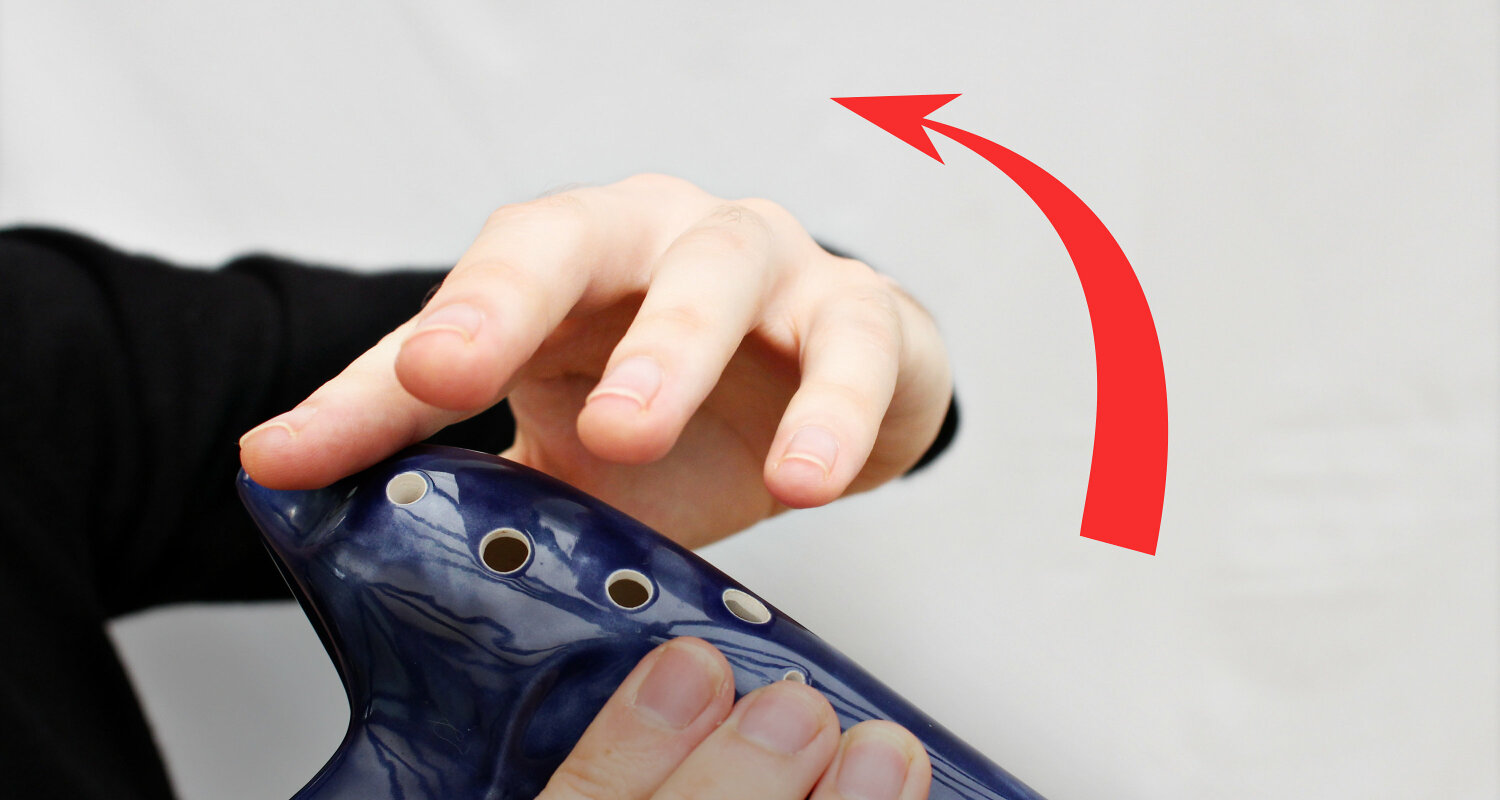 You may be creating turbulence with your tongue position

The position of your tongue has a large impact on tone clarity: raising the back of your tongue, or positioning its tip too close to your teeth results in a noisy tone. 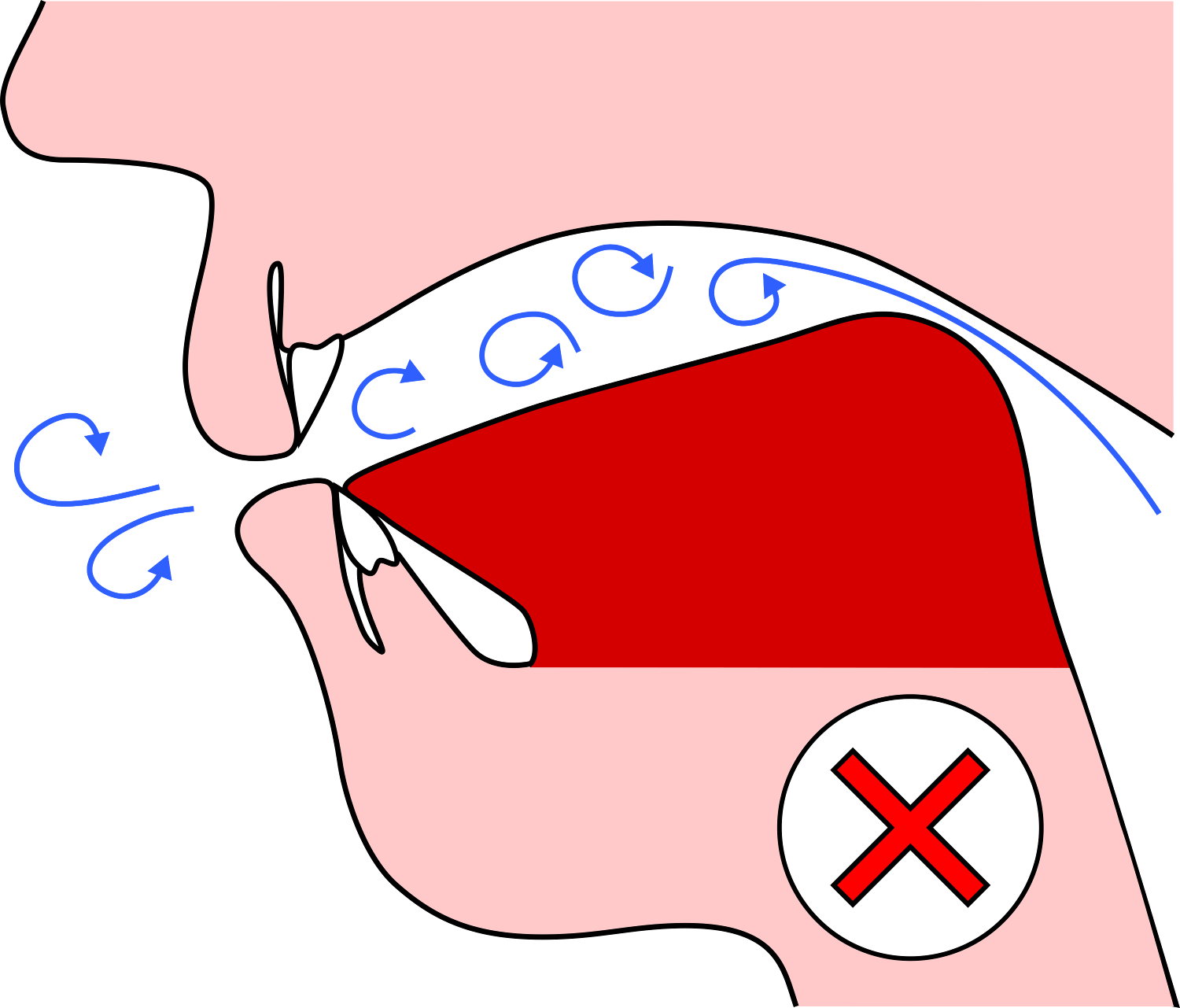 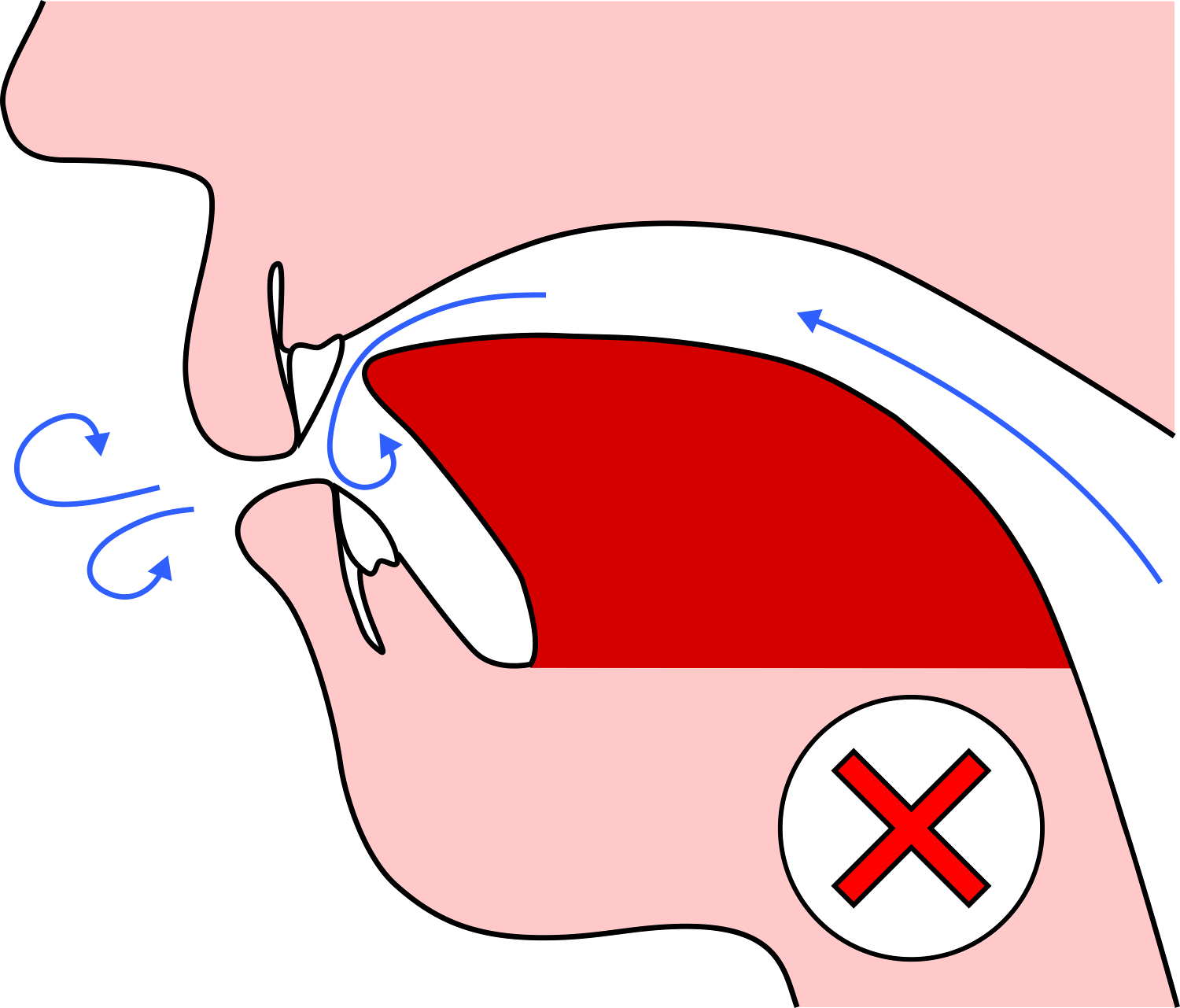 The ocarina may be fine, but...

How an ocarina sounds to you differs from how it sounds to an audience. The high notes will sound more airy to you because the ocarina is only inches from your ears. Also, ocarinas have irregular sound projection, and most volume goes directly forwards away from the voicing—and you by extension.

This isn't a problem from the perspective of an audience. Wind noise is much less audible to someone listening from a distance.

Because of this, I strongly recommend finding out how your instrument sounds as an observer. Get someone else to blow it—preferably using good technique—and have a walk around. You may be surprised by how different it sounds.

The sound you hear is affected by room acoustics

The ocarina's pure timbre is quite susceptible to an acoustic effect called comb filtering. The sound reflections inside a room may make certain notes sound stronger or weaker than they actually are. Try playing outside in a wide open space to get a true sense of how your instrument sounds.

Psychology is also a factor

If the ocarina is your first instrument and you suddenly notice the airiness, it may be a psychological effect. It is easy to miss how your instrument sounds due to 'selective awareness'.

As you spend more time playing music, these things become subconscious and, as this happens, you can pay more notice to what you actually sound like. Thus, you may suddenly notice things that were always there but you were not aware of. This is a good thing as it means that you are making progress.

The ocarina is airy by design

Some ocarinas are airy by design, such as those made by Fabio Menaglio.

These ocarinas were designed to fill large music halls and have a large voicing to achieve a high volume. A side effect of this is it makes the sound more airy. This isn't a problem from the perspective of an audience as wind noise is much less audible to someone listening from a distance.

Also, an airy timbre isn't bad in and of itself, and can be very effective for some types of music. The problem is rather an ocarina which is imbalanced, with a clean low end and airy high end.

The more holes an ocarina has, the more airy sounding its high notes will tend to be. This is a side effect of the instrument's lossy physics.

A 10 hole ocarina will generally have a cleaner sounding high end than a 12 hole, but this does depend on instrument quality. Multichambers are even better as the individual chambers only provide a small portion of the total range.