If the ocarina was your first instrument you may be unaware of harmony in the music you play. This is more limiting than you may expect as melodies and harmony are closely related. A basic awareness of harmony greatly improves your understanding of what you are playing. It also helps you create improvisations and allows you to harmonize a tune if you don't know the chords. This can be very useful when playing with other musicians.

To develop an intuitive feel for this, you really need to play with chords and harmony for yourself. And since ocarinas are monophonic, you will need a different instrument to do so. A few options are given in the next paragraph. Be aware that you do not have to play an instrument well in order to learn from it. You can learn a lot by simply listening to the sound of notes over a droning chord.

Many MIDI sequencers allow you to play chords by mapping notes to the letters on a standard computer keyboard—LMMS, for example, which is free. There are also many 'virtual piano' apps for iOS and Andriod which do the same thing using the touch screen. Another option is a MIDI keyboard, a standard keyboard which uses your computer to produce sound.

I feel that keyboard is intuitive here as chords and melodies are played using the same set of keys. It's easy to see how the two relate to each other. If you opt for this route, look for one with at least 3 octaves to let you play chords, and see how melody notes sound in relation to them. Note that I do not consider harmony ocarinas good learning tools as they have serious technical limitations.

The first part of this page quickly discusses where chords come from. If you are already aware of this feel free to skip forward.

Finding the chords of a scale

While it is possible to learn harmony by playing notes and observing how they sound, I believe that it is useful to know how chords relate to scales. Chords are usually formed from an interval called a third, the distance between any 3 sequential notes of a diatonic scale. For example, in G Major: if you begin on G, skip A and land on B. B is a third above G.

Harmony can be formed from two notes in this way, but chords of 3 notes are more common as they have a richer sound. These are formed from a stack of 2 thirds called a triad. To form a G triad, you raise 1 third from G to B, then another to D. Thus you get the notes G, B, and D.

By following the same pattern from the other notes of the scale, their chords may be found. The triads for D, E, and F♯ ascend into the following octave. 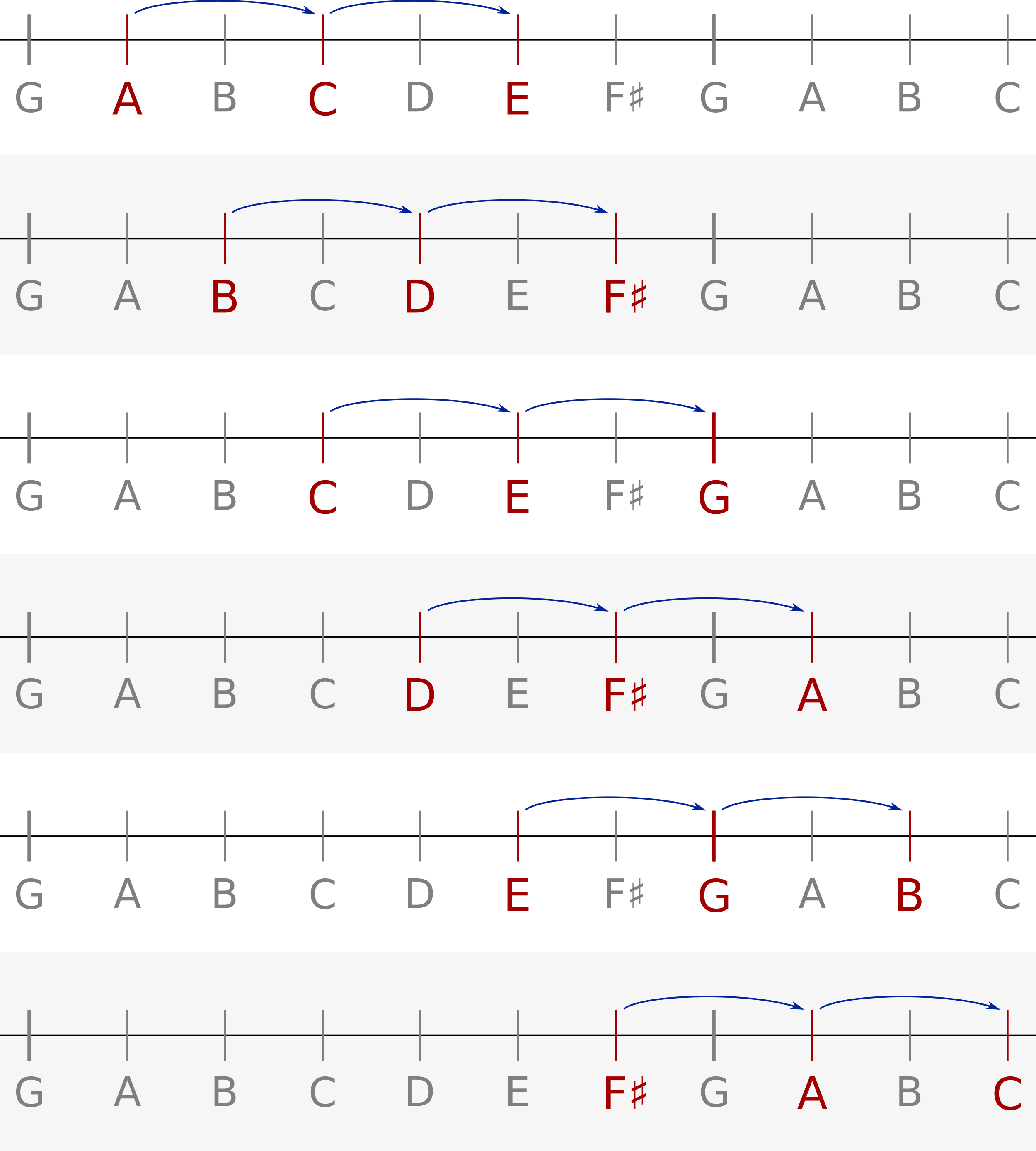 If you play these notes you'll notice that some of them sound different. It is easiest to understand these differences by looking at them within the chromatic scale.

If you take the first chord, the one built from G and count the number of semitones between the root and third you'll find there are 4. If you then begin from the third and count forward you'll find that there are 3 semitones. Both of these where called a third so what's going on?

If you examine the intervals of the second chord of the scale, A, C, E you will find that the intervals are swapped around. The first interval is a minor third, while the second is a major third. This is called a minor triad. There are 3 minor triads in this scale. A, B and E.

These covers every triad found in the scale except for one. If you examine the intervals of the F♯ triad you will find that they follow a pattern of minor third, minor third. This is called a diminished triad.

You may have realized that there is one last combination of thirds, namely a stack of two major thirds. This is called an augmented triad. I'm only mentioning this for the sake of completeness as you don't need to understand them for basic harmony.

The relationship between chords and melody becomes more obvious if you consider all occurrences of a chord's notes. Within the sounding range of a single chambered ocarina in G, the G Major triad has the notes G B D. The first 2 notes, G and B are repeated at the top of the range.

A Minor similarly repeats its first 2 notes at the top end.

B Minor repeats 1 note at the top

C Major is a little different; in addition to the high C, there is also a low G. A black dot has been added over the starting note of the triad.

D Major is the same, the A exists at the bottom.

E Minor duplicates 2 of its notes below its root.

With the final triad, F♯ Diminished, 2 notes go into the second octave. These same 2 are also duplicated at the bottom.

It can be useful to highlight the notes of different chords in your mind's eye when viewing a piece of music. By doing so, you can easily see which melody notes fall within the chord and which don't. Below this is demonstrated using the chords of D and G within a G scale, within the range of a single chamber G ocarina. 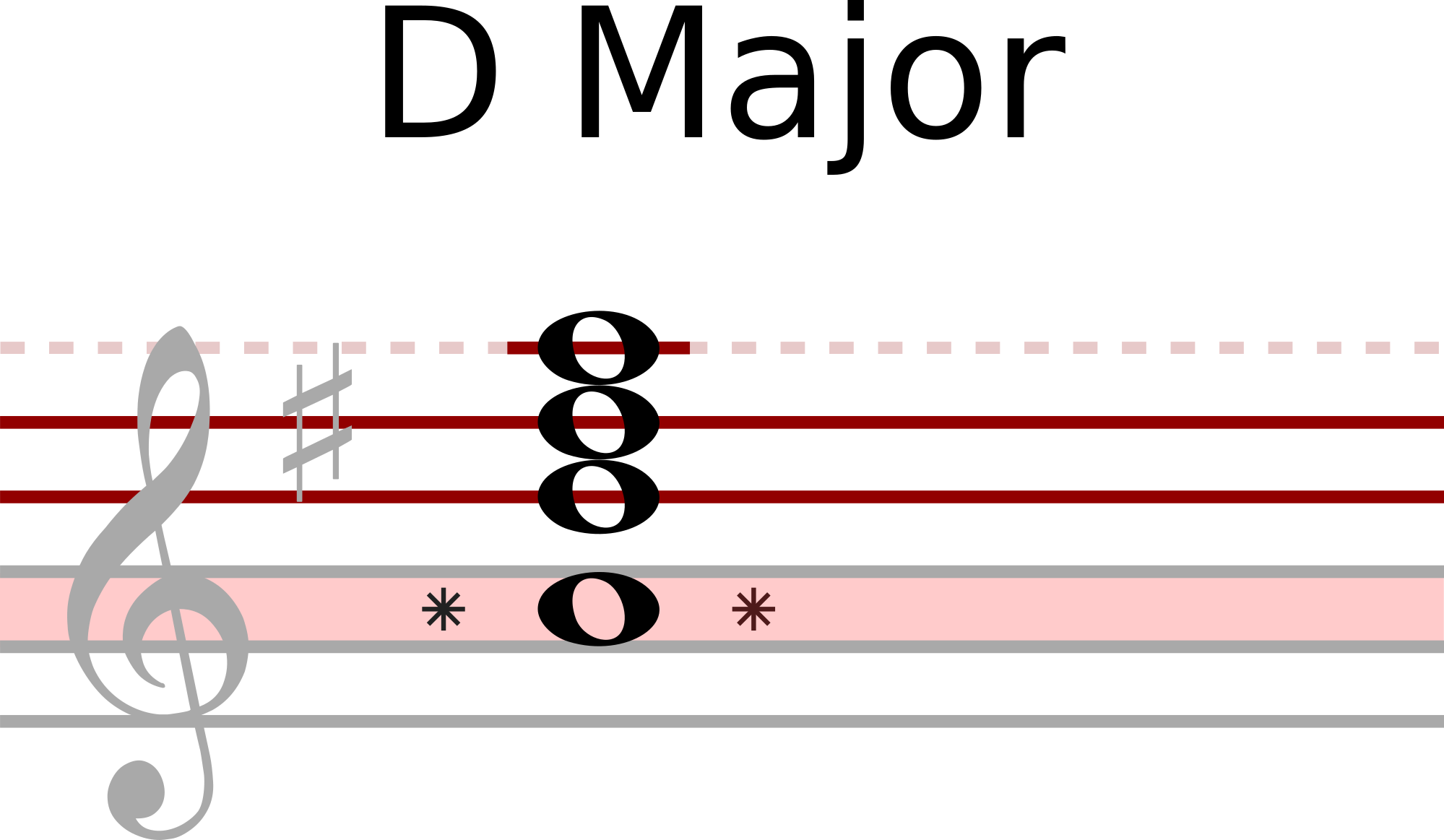 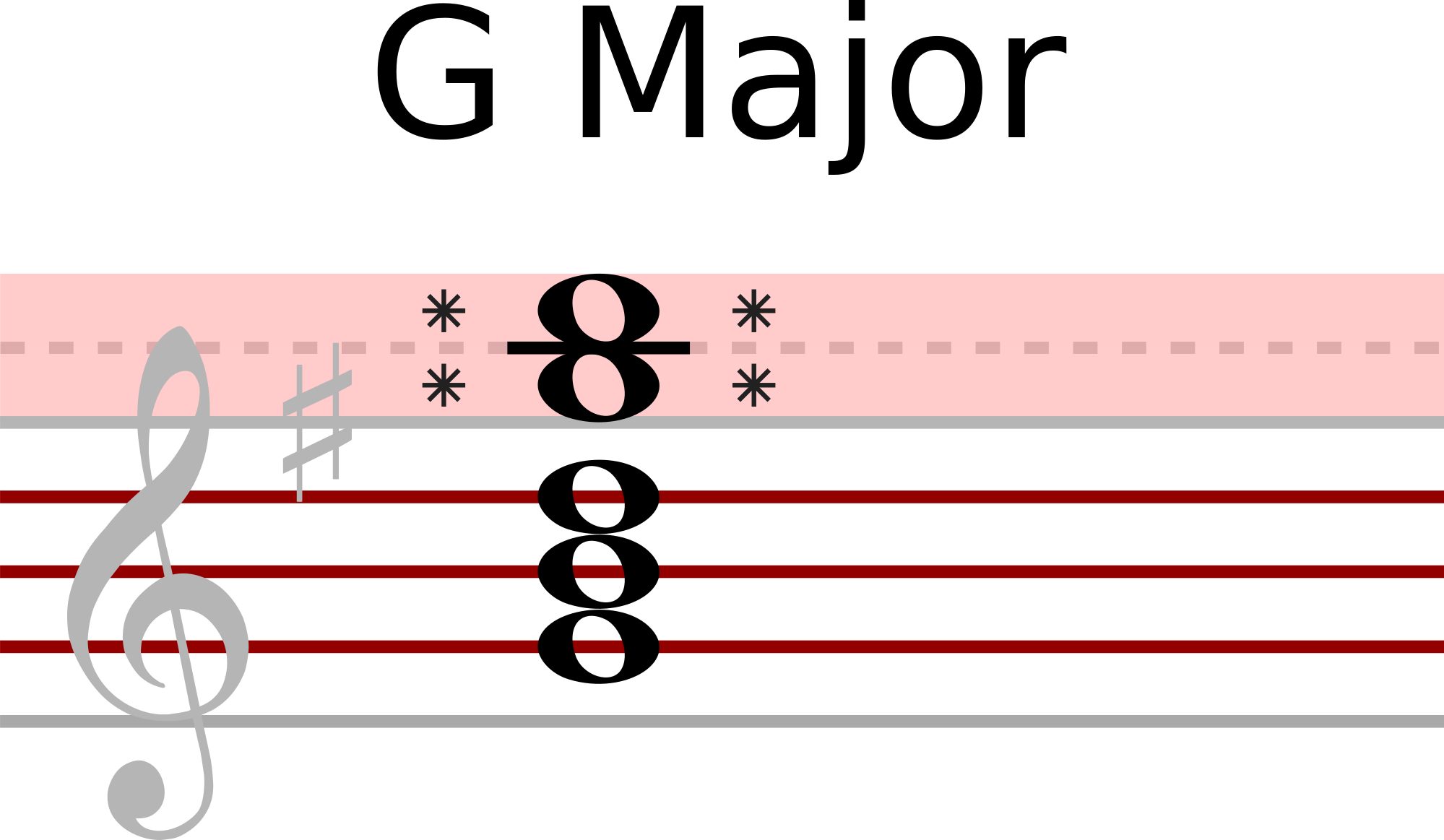 Finding chords in a melody

To see how melody and harmony are related, you want to view which of the melody notes fall within the chord. I think the easiest place to begin is through music with chord letters, sometimes called 'guitar chords'. Within this system, chords are notated above the staff using simple letters: 'A' for example indicates an A Major triad and 'Bm' B Minor. Using this you can easily see what the chord is at any time.

While there are numerous ways that melody can relate to harmony, you will often encounter the following:

Melody as an arpeggiated chord

When the notes of a chord are played sequentially rather than together, they are called an arpeggio. It is common to find melodies based on these notes. The second part of the tune Athol Highlanders is a good example as it's composed almost entirely of arpeggios.

Melody centred around a single note of the chord

Sometimes a melody will centre around a single note of a chord, the second to last bar of the hymn Gwahoddiad does this. The chord is A Major and the melody is centred around it's fifth, the note E.

Many chords contain common notes. For example G Major and E Minor both contain G and B. They only differ in one note: G major contains a D while E minor contains an E. Because of these common notes, it is often possible to harmonise the same melody using different chords. The following arrangement of the welsh tune Hoyd y Frwynen does this. Bars 1 and 3 are identical, yet the first bar is harmonised with G Major and the third bar with E Minor.

Melody that does not begin on a chord note

Melodies can be written where the first note accompanied by a given chord is not in the chord. For instance, bar 2 of the following example is harmonised with E Minor yet begins on D. Beginning in this way creates a sense of tension which resolves into a chord note. It drives the music forward.

Melody centred around the seventh of the chord

Just as the notes of the triad where found by stacking 2 thirds above the root note, this pattern can be continued. If you begin from a root note and stack 3 thirds, you get something called a seventh chord: root, third, fifth and seventh.

The full details of seventh chords are beyond the scope of this page yet it is worth being aware of them. The seventh chord formed from the fifth of any scale is called a ' dominant seventh'. It is quite common to run across melodies which harmonise on the seventh of this chord, for example:

Bar 2 and 3 are harmonised using a D chord while the melody of both centres around C, the seventh of D. In G Major, D is the dominant chord. The seventh is provided by the melody in this instance; however, a D7 chord also works as a harmony. Bar 7 leads from the seventh down to the fifth.

A good way of developing a feel for harmony is to pay attention to the harmonies of the tunes you play regularly. Try playing them on a keyboard and observe how the melody notes relate to the chords. Do they follow any of the patterns described here or do something different?

Another great exercise once you start to develop a feel for this is to try to harmonise a piece of music that you do not have chords for. A good way to do so is to record the melody and play it in a loop. As it repeats, play different chords from the tune's key, holding them over the whole melody.

Over time you will also discover chord patterns that show up in many pieces of music. To give one example, a lot of pieces in a major key end with a 5 chord to 1 chord transition. This is called an Authentic cadence.