The technicalities of composing for the ocarina

Composing for the ocarina requires a different approach to many instruments due to their limited range and lack of easy control over volume dynamics. The musical function of the ocarina is pretty close to the tin whistle and certain kinds of bagpipe.

There are many types of ocarinas, of which the most widely adapted for serious playing is the Italian transverse ocarina and derivatives thereof. These ocarinas have a range of approximately an octave and fourth, are fully chromatic, and have an innate volume dynamic where the high notes are louder than the low.

Ocarinas can produce timbres ranging from the 'pure' tone the instrument is most known for, to a textured 'buzzy' timbre. This is set when the instrument is made, and varying it requires changing instrument. Ocarinas are are loud, piercing, and almost always take the lead in a mix.

Working with limited range instruments may be a lost art to some extent. A limited range chromatic instrument offers possibilities for minor and modal music, for example modulating between different modes in the same range. Examples of this can be found in music for the French central bagpipe, Swedish bagpipe and Arabic music.

Two different approaches have been used to extend the range of the instrument:

Any individual, skilled ocarina player can be expected to be able to:

Single chambered transverse ocarinas are fully chromatic instruments with a limited range. They can produce about an octave and a fourth (e.g. C5 to F7) .

To work around the limited range, ocarinas are available in multiple tunings, for example C, G or B flat, shifting the pitch of the whole instrument up or down. An ocarina in G may for instance play from G4 to C6.

It is important to stress that ocarinas in different keys and ranges are used to gain access to a different range of notes, not play in a given key, as the instrument is fully chromatic.

Ocarinas have been made in all 12 keys between C3 and C6. The most commonly available ranges for single chambered ocarinas are those used by the traditional ocarina septet:

As noted, the original design of the transverse ocarina sounds a range of an octave, with an extension to the fourth above. Subholes are a modification to this system which extends the range of the instrument downwards:

The range extension provided by subholes however is not 'free'. Due to physics, it changes the playing characteristics and tone balance of the whole instrument:

The range that an ocarina can sound naturally decreases as chamber volume increases. Introducing two subholes in 'soprano' range ocarinas has very little impact to their playing characteristics. Only exceptionally well made alto ocarinas can have two without suffering from the problems noted.

In alto range ocarinas, subhole notes can work effectively as passing notes, but you generally don't want to start or finish a piece of music on one of these notes, unless you are deliberately going for a weak effect.

The ranges of ocarinas are discussed in detail in the article Ocarina keys and pitch ranges.

Music for ocarina is written in standard music notation in the treble clef, and ones in different octaves are usually treated as a transposing instrument whereby the ledger line C below the staff refers to an ocarina's low C. Consequently:

The treble clef is used for notating music in all octaves as all of these instruments have the same fingerings. Players often start on an alto C ocarina before moving to ones in different octaves.

Ocarinas in other keys may be treated either as transposing instruments, or written at sounding pitch. Just be sure to clearly indicate what you are doing:

One reason for writing music at sounding pitch is that a player may prefer to play something on a multichamber in a different key, which overlaps the required range. When music is written at sounding pitch it is easier to work out how to do so.

Ocarina septet, and other ocarina ensemble music also follows the pattern of using the treble clef regardless of sounding octave. Some historic septet music used the F clef for contrabass parts, although this is no longer common.

Volume dynamics are technically possible, and achieving them requires partially venting or shading finger holes and changing blowing pressure so that the pitch does not change. This is quite difficult to do consistently and as of writing, is not common practice among players.

Similar to bagpipe music, creating an interesting performance on an ocarina depends on:

An easy way of approaching composing for the ocarina is to write the music such that the parts of the music one wants to emphasise are high notes, and parts that are de-emphasised are lower notes. Yet this alone is rather restrictive.

Notes can also be emphasised using articulation and ornamentation:

As well as being quieter, the pitch of an ocarina's lowest notes is exceptionally sensitive to pressure changes and can easily be bent sharp by about a major third, and flat by about a major second. The high notes, on the other hand, are very insensitive to pressure changes, and only bend about a quarter tone flat or sharp before they start to sound bad.

The pitch instability can make for effective ornamentation, for example starting at low pressure, and bending the note up to the intended pitch, creating a simultaneous change in pitch and volume. Naturally, breath vibrato is also easily achieved on any note.

Ocarinas are easiest to play in a relatively stepwise fashion. The larger the interval, and higher the tempo of the music, the harder it is for a player to perform cleanly. This is due to a few factors:

That being said, very high tempo music that uses a lot of leaps can be performed on ocarina given a sufficiently skilled player. There are examples of Asian ocarina players performing 'flight of the bumblebee' on a multichamber ocarina on YouTube, with very impressive technical competency.

The best way of learning the limits of the ocarina would be to find a skilled player online, offer them music to try, and see what they are capable of performing, and what sounds good.

Multichamber ocarinas extend the range of a single chamber upwards. For example:

Multichambered ocarinas with as many as 4 chambers can be found, but ones with two or three are by far the most common as of writing. Chambers are numbered starting from one and ascend upwards. The first chamber is responsible for the lowest notes, and subsequent chambers for higher ones. 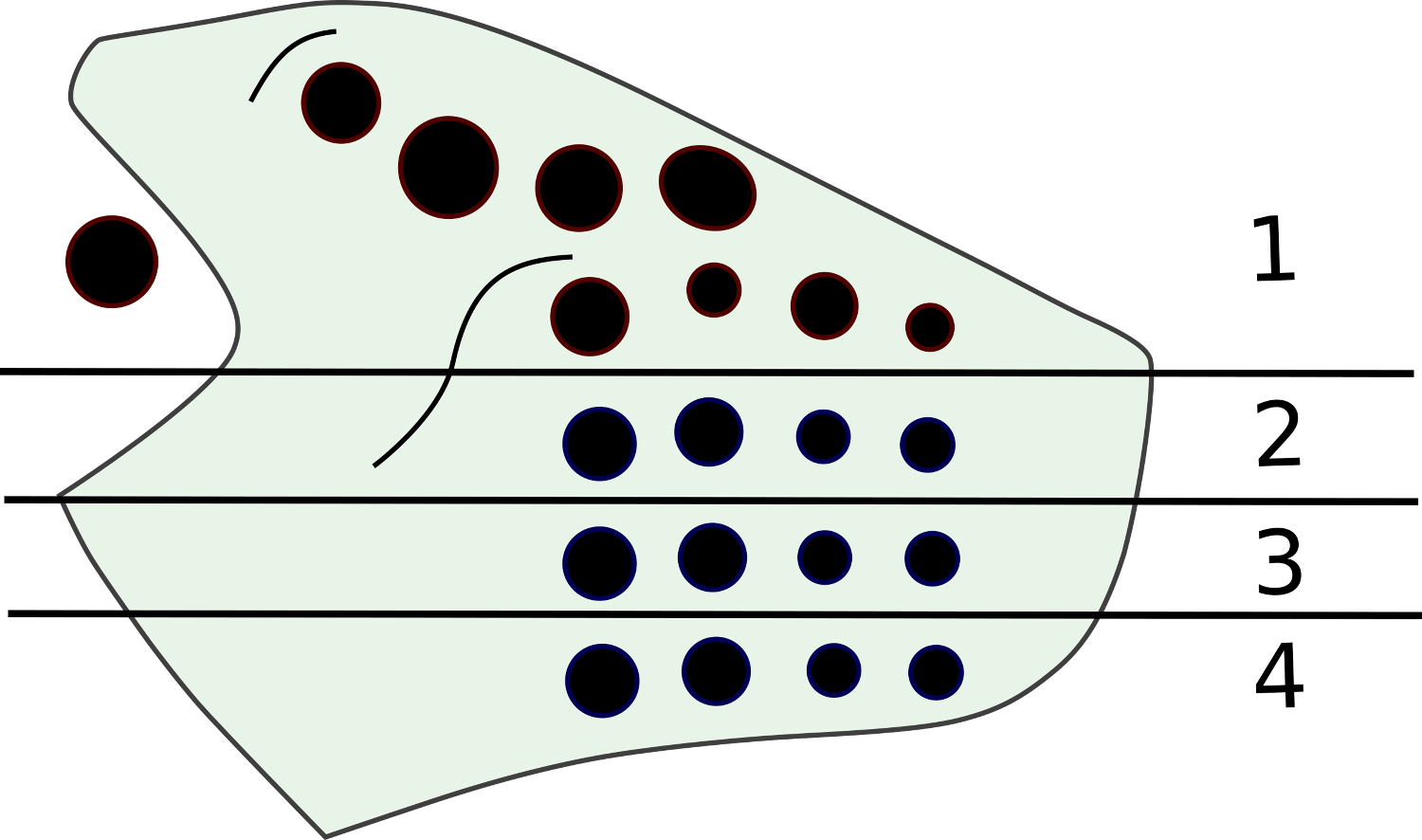 Each chamber is somewhat analogous to a single string on a chordophone, in that they must be fingered and played separately. However, the total range that is played by each chamber is much smaller. The first chamber has the largest range with about a minor tenth, and higher chambers producing about a minor sixth each.

Exactly what range is provided by each chamber depends of the tuning system. There are two different tuning systems found on multichambers, Asian and Pacchioni:

The ranges provided by each chamber of both of these systems is discussed in detail in the article Multichamber ocarinas and their tuning systems.

It should be noted that both of these designs exist primarily to extend the sounding range. Some multichambered ocarinas can play well-tuned harmonies between chambers, but this can't be assumed as of writing. Maintaining precise harmony tuning between chambers for a range of different intervals is complex due to the physics of the instrument.

There have been some experiments with introducing internal channels allowing the higher chambers to use fingerings incorporating both the left and right hand, with varying success, and other compromises.

The playing characteristics of multichambered ocarinas are very similar to that of singles. The higher notes of the first chamber are generally much louder than the lowest notes. Higher chambers are likewise louder on their higher notes than low ones.

The volume balance between multiple chambers is usually relatively flat on average. There tends to be a mild drop in volume between the lowest note on one chamber and highest note on the previous one. This does again vary between ocarinas and isn't standardised.

It is easiest to move between notes on one chamber as well as between notes on two adjacent chambers. Making a leap which skips over an intermediate chamber takes more time, due to the larger distance the windway and fingers must move to reach the desired chamber.

For me personally, Playing 4/4 eighth notes, with each note on an adjacent chamber (leaping back and forth) is possible up to about 180 BPM. On a triple ocarina with a chamber skip, the same exercise at 170 BPM is achievable. Both feel like I could raise the tempo with practice.

On Asian system multichambers, there is no note overlap between chambers, so you cannot 'cheat' as can be done on violin by changing positions. The Pacchioni system does provide an overlap and offers some of those benefits. See Multichamber ocarinas and their tuning systems.

Performing a switch cleanly is usually done by tonguing the note (stopping the sound) to prevent off-sounds from being created. While composing, the music needs to be phrased such that these forced breaks don't awkwardly split phrases.

Regarding an alto C ocarina: