Ornamentation on the ocarina

Ornaments are decorations which you can add to your music to draw attention to certain notes. They are particularly important on the ocarina because volume dynamics are so difficult to achieve. Making effective use of ornaments is essential to creating an interesting performance.

In a slide or 'glissando', the pitch changes smoothly between two notes. They are a way of ornamenting notes which are slurred together. When used sympathetically with the style of music, slides are an effective way to create emphasis. It is important to note that a slide should always go to or from a definite note. They are not an excuse for sloppy intonation.

To play a finger slide on two adjacent notes, you slur them in a single breath and move between them by sliding a finger onto or off of a hole. This is shown in the video above. Slides can be played across a wider range, which just requires that you move several fingers simultaneously. When doing this, it is often easier to move the hand downwards, causing the fingers to curl up away from the holes as demonstrated below. Slides across a wide range are extreme effects in most kinds of music—like the opening clarinet wail in "Rhapsody in Blue"—so you won't want to use them often.

Note that if you are descending from a note to another note, the slide into the second note does not have to be from above, you can finger the scale degree below and slide upwards into the target note. The inverse is also possible.

As an ocarina's pitch is sensitive to pressure, you can play slides with your breath. Breath slides are more limited than finger slides because of tuning problems. If you push a note sharp but want to start the following note in tune, you need to suddenly reduce your breath pressure. There is a good chance the second note would begin sharp.

Because of this, breath slides are most useful for sliding into notes. Sliding into a note with the breath changes its volume and pitch simultaneously, which can sound nice in slower music. This can also be used for bending notes—that is, playing the note above or below then returning to the original. A breath slide as a final fadeout at the end of a tune is not a good idea. As doing this changes the pitch, it disturbs the tonal resolution of the music. It usually sounds amateurish.

The lower notes can easily be bent up or down by a semitone with the breath; the high notes will only bend about a quarter tone without squeaking. Bending the pitch by a given amount needs a much larger pressure change on the high notes.

To add interest to long notes of the same pitch, you can apply vibrato. With vibrato, a note's pitch hovers around the desired note rhythmically. This is accomplished by varying your breath pressure.

To learn how to play vibrato, it is best to start by practising exhaling at different rates. At first, do this without your ocarina. With a large aperture between your lips to create a bit of resistance. take a deep inhalation from the diaphragm and exhale as rapidly as you can. Secondly, do the same thing but exhale more slowly. Practise both of these alternately until they become natural; you may find it helpful to put your hand on your belly. Finally, vary your breath pressure as you exhale. These three exercises are demonstrated in the video below.

Ocarinas are unusual in that the pitch of their high notes is much less sensitive to pressure changes than the low notes. I recommend that you begin working on your vibrato using notes in the middle of the range. Focus on making the fluctuation of your vibrato consistent over time. This gets easier as it enters your muscle memory. It is helpful to practise to a metronome. Start slowly (between 40 or 60 BPM), placing the peak of your exhalation on the beat.

The pitch change should not be excessive; a fluctuation of 10 to 20 cents is fine as a starting point. As you get better, you can begin to increase the tempo with your metronome. When the frequency of your vibrato is slower, you will want a larger change of pitch, reducing it as the rate of your vibrato increases. You should also practise on lower and higher notes. Notes higher in the scale require a considerably larger pressure change to achieve the same effect.

Trills are rapid alternations of two notes. Note that the demonstration below is quite slow. I don't normally use trills.

Trills are played by rapidly raising and lowering a finger. It is easiest to practise this to a metronome. To help make your trills even, you can begin practising with two ticks per trill: one when the finger reaches its highest point, and the second when it reaches its lowest. Start practising this slowly. Like vibrato it gets easier over time as the action enters your muscle memory.

While playing a trill, you have to rapidly vary your breath pressure so that both of the notes are approximately in tune. Assuming that the notes are adjacent, this is effectively a rapid but shallow vibrato. The movement of finger should be large enough so that the note isn't unduly flat. However, you also want to keep this movement as small as possible. Excessive movement will limit your speed.

As you get better at playing trills gradually speed up. You will reach a point where having one metronome tick for each half of the trill becomes awkward. At this point you can instead practice with the tick per two movements, so it only occurs when the finger is either up or down. You can move on further still by having one tick per two trills, or 4.

Please note that mordants and turns (next section) are classical ornaments and I am not an expert in classical music. I suspect that the execution of these changes with the musical era. Please check other sources.

A mordant is an ornament often found in baroque and classical music. It is used to ornament the start of a note. The note to be ornamented is played; then, very slightly later, the note above or below is played for a brief duration. After this, the starting note continues for its desired duration.

To play a mordant, you lift or lower the finger for the next note of the scale you are in slightly after beginning the note. A mordant above is called an upper mordant, while a mordant below is called a lower mordant.

Note: A mordant is not a cut / strike

When played fast, a mordant may start to sound like a cut or strike—fingered articulations common in folk music. They are distinct in that a cut is placed on the beat, while a mordant generally comes after it. Also, the duration of a cut is constant regardless of tempo.

Turns are multiple note ornaments from classical tradition. They are applied to another note which I will call the parent note. Turns are indicated with the '~' sign above the note. 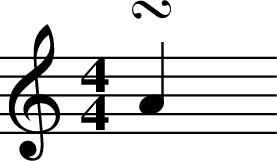 To play this, the duration of the note is divided into 4:

And in standard notation:

Turns are commonly prefixed with another note of the same pitch as the lead in note.

Note: A turn and a roll are not the same!

You should note that a turn is not the same thing as a roll, an ornament common in Irish traditional music. A roll is an ornament constructed of 3 notes articulated using a cut followed by a strike. Well played cuts and strikes are too short for their pitch to be heard, so they function as articulations rather than notes.

People involved with traditional music often notate rolls using the same symbol as a turn. If you see a '~' in a folk tune, the transcriber is almost certainly implying a roll—not a turn.

Grace notes are an ornament from classical tradition. While they can be interpreted in multiple ways, they are often considered as short notes similar to a mordant, but placed immediately before the start of a note, stealing time from the note before. They usually have perceptible duration and are meant to be in tune. This is possible on the ocarina in some circumstances.

As the duration of a note gets shorter it is progressively harder to keep an ocarina in tune. This happens as the presence of a finger close to a hole changes it's pitch, and different notes require different blowing pressure to sound in tune. Thus, fingers and breath pressure must move faster, or intonation suffers.

Due to these factors, attaining very brief notes that are also in tune is only really practical when they are close to the parent note. This effect is much easier to achieve on other instruments, such as flute and recorder as they are much less sensitive to hole shading.

You can try playing both ascending and descending grace notes on G. Finger an A and start the note with the tongue. Immediately after you do this, lower the finger to play G. Performing an ascending grace note is the same, but you begin on F and rise to G.

As you can see below, grace notes are notated using small notes which precede the parent note. They are usually attached with a slur.

There are a number of other ornaments and effects which are possible on the ocarina, but as I haven't practised them, I cannot advise on how to approach them. It is possible to change an ocarina's timbre by engaging the vocal chords, and 'singing' or 'humming' while playing.

It is also possible to vary the attack of a note by varying the pressure you start it with. If a note is started with a very brief, sharp puff of air, this causes the ocarina to briefly squeak and adds a slight percussive effect. This is easiest to do on the high notes. Inversely, if the initial burst is more controlled while tonguing a note, it starts much more smoothly.