While I have outlined the articulations and ornaments that ocarinas are able to perform, you may still wonder how to apply them in practice. This page shows how they can be applied with two examples: a song called The Foggy Dew, and a jig called Out On the Ocean. Don't worry if the examples are not to your taste, as the same concepts apply to all melodic music.

Phrasing and articulation in songs

The Foggy Dew is a song about the Irish Easter Uprising. It is a ballad with 6 verses and no repeated chorus, though the melody itself does repeat. If you look up the melody, you will find something along the lines of this:

The most fundamental thing you need to consider regarding articulation in practice is phrasing. A phrase is like a sentence, a complete musical 'idea'. In vocal music, phrasing is almost always derived from the structure of the lyrics. Below I have added the lyrics of the first verse. Notice that both the notes and their durations vary to fit the lyrics. Even the repeat goes away as the melody now differs.

When the lyrics are considered, phrasing becomes apparent: where a comma or period would be placed is usually a phrase break. I have marked these in the following sheet music with slur marks. You don't have to write out the lyrics in practice, as you can also learn this from listening. I'd always advise listening to a sung performance before attempting to play a song instrumentally.

Note that you should not reference The Chieftains' performance with Sinéad O'Connor for basic phrasing of this song, as the phrasing of that performance is unusual. I have a note on this at the end of the section. 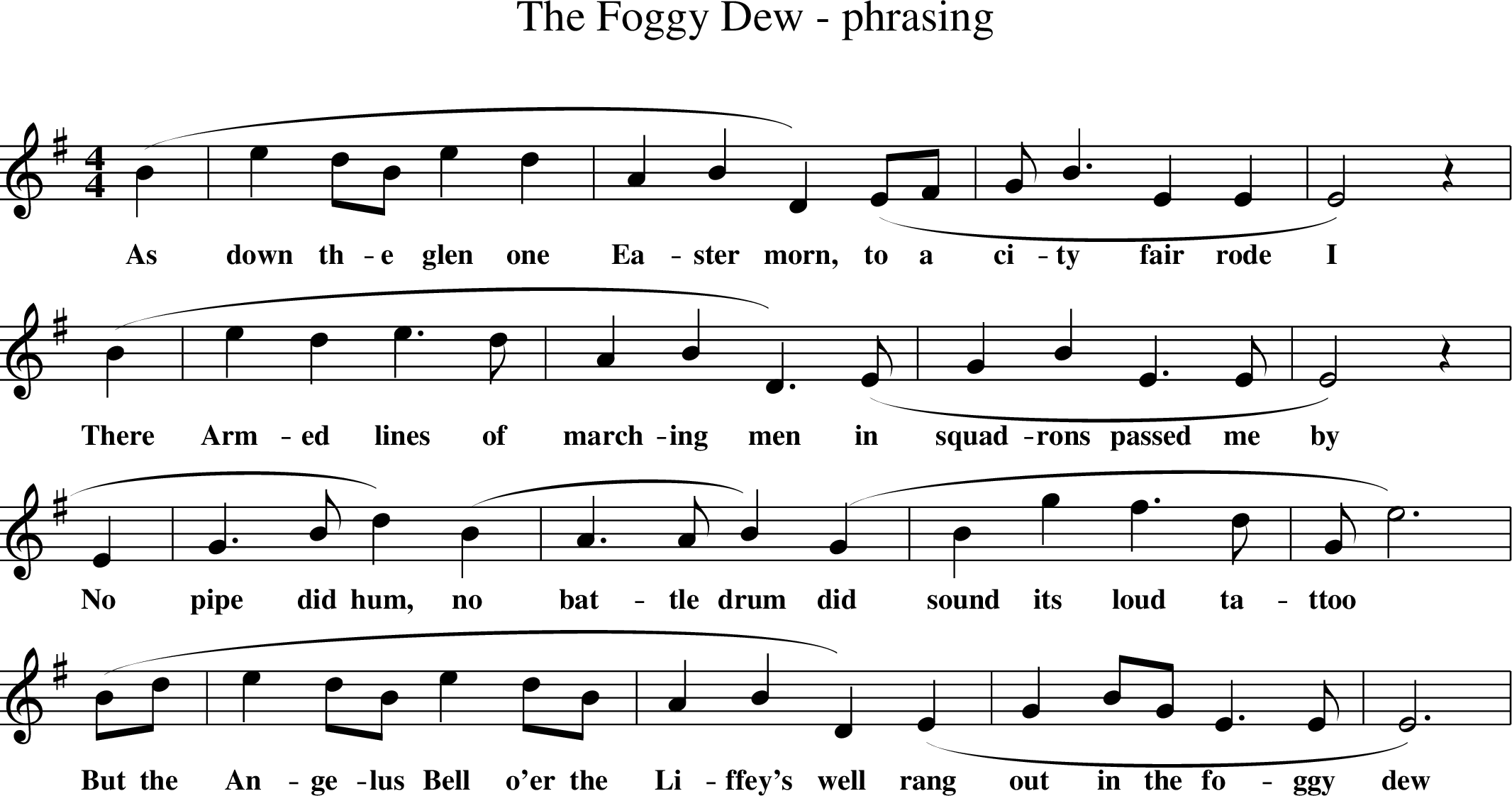 The goal when playing is to make phrases sound independent. On the ocarina, you control phrasing by varying your articulation, as varying volume and timbre is difficult. A good starting point is to begin each phrase tonguing the first note, then slur the remaining notes in the phrase. If there are any notes of the same pitch, separate them by tonguing them, but make this articulation shorter and softer. Tonguing further towards the back of the mouth helps with this.

The following example shows how you may do this. Phrases are again indicated with slurs and rests indicate the longer stop, added to separate them. In practice these articulations would be much shorter, just long enough that the phrases sound distinct, so the song stops sounding like a single string of notes.

Aim to play each of these phrases as a single breath. The gap between two phrases is a good place to take a breath, as this note is already being shortened to create phrasing. You don't want to be struggling running out of breath as that always sounds bad.

While this is a start and gives the music a good structure, it is still rather plain. As was hinted before, you don't have to slur a whole phrase. This separation is caused by varying your articulation, and that can be done once you see that tongued articulations can be strong or weak. You could briefly tongue a note to create a weak articulation, and stop the air for longer to get a stronger one.

It is also possible to vary the articulation used within a phrase. For example, when a word is sung across two or more notes, you can replicate this by slurring those notes in a single breath. I feel that the best way to develop an intuition for this is to listen to performances. You can also experimentally vary your articulation, as you may chance on something that sounds good.

Your articulation may also vary between phrases as the main thing that separates them is change, not necessarily a gap. For example, a series of short staccato notes followed by a series of legato notes can sound like two phrases, as they are notably different.

On the ocarina, you can also make use of fingered articulations, cuts and strikes. These are achieved by briefly covering or uncovering a hole, producing a sound so short it sounds like a click. They are placed on the relevant sub-beat and can be used anywhere that you would tongue two notes. Although, as they are played over a slur, the result sounds notably different. This can be used to good effect for variation.

A simple way of using them is to articulate multiple notes in sequence. When doing this you normally alternate cuts and strikes as it is easier; this is often called a roll. In the following the annotation "CT" represents a cut, and "ST" a strike.

In order to create emphasis on the ocarina, you need to do something that sounds different. A straightforward way to do this is to use slides—either finger slides or breath slides. They are particularly emphatic when making an ascending leap. The ocarina's high notes are naturally louder, so they carry their own emphasis and adding the slide amplifies this effect. When a slide is used between two notes that are close together, the effect is more ornamental than emphatic.

I've added a slide between the first and second note. Notice the little line next to the E in the second bar: this indicates a slide. Play this as a finger slide, though you don't have to slide all the way from B to E. You could begin the slide from D. Also note that I've slurred across the bar line. This pattern of slurring across the bar and sliding into the upper note is common in Irish music.

Emphasizing with trills and mordants

Another way that you can create emphasis is to trill the note you wish to emphasize. In the example, this would be a short trill as the trilled note is short. There is quite a lot of room for variation as you can trill the while note or only part of it. You could also use an upper or lower mordant in this context, which is essentially a single trill played like so: note, upper (or lower) note, starting note.

As this is a traditional Irish song, it is worth noting that musicians in this tradition rarely use trills. I'm sharing the sample here since it can work well in other contexts. There are examples of Irish traditional musicians using trills if you look for them, mostly in slower music.

Fingered articulations can also be used to create emphasis. For example you can emphisise the notes that fall on the beat by starting them with a cut. You can amplify this by tounging the cut, starting the airflow while the cutting finger is raised, adding a chirp to the attack of a note.

In the following cuts have been used to emphasise notes on the first and 3rd beat, essentially simulating a drum beat. Note that fingered articulations are not used in the first bar as cutting these high notes is not very effective and, as they are on an ascending interval, strikes won't work either. Slides could be used here if you wish.

Another way to create emphasis with fingered articulations is to perform multiple of them in very quick succession. This is almost always done with a cut followed by a strike, a pattern often called a roll. In the following example I've added an emphatic roll to the final note of each section. The effect can be strengthened by shortening the time between the cut and strike. Doing this is more difficult as your cut and strike must have a very short duration. This demands both player skill and a fast responding instrument.

If you listen to several performances of the song, you will hear it phrased in different ways. The Chieftains' performance with Sinéad O'Connor, available on YouTube as of writing, is particularity interesting. It begins as a free time air, morphs into a march or ballad, then ends in a similar style to the opening. How the melody is phrased varies a lot between these sections.

The first part of that performance is phrased approximately as follows. Slurs are used to denote phrases. If you've never seen it before, the half circle with a dot is a fermata; it means that the note is held longer than the rhythm implies, at the performer's discretion. This arrangement works in the context of a sung slow air. I'm not sure how effective it would be as an instrumental to an audience who doesn't know the lyrics. 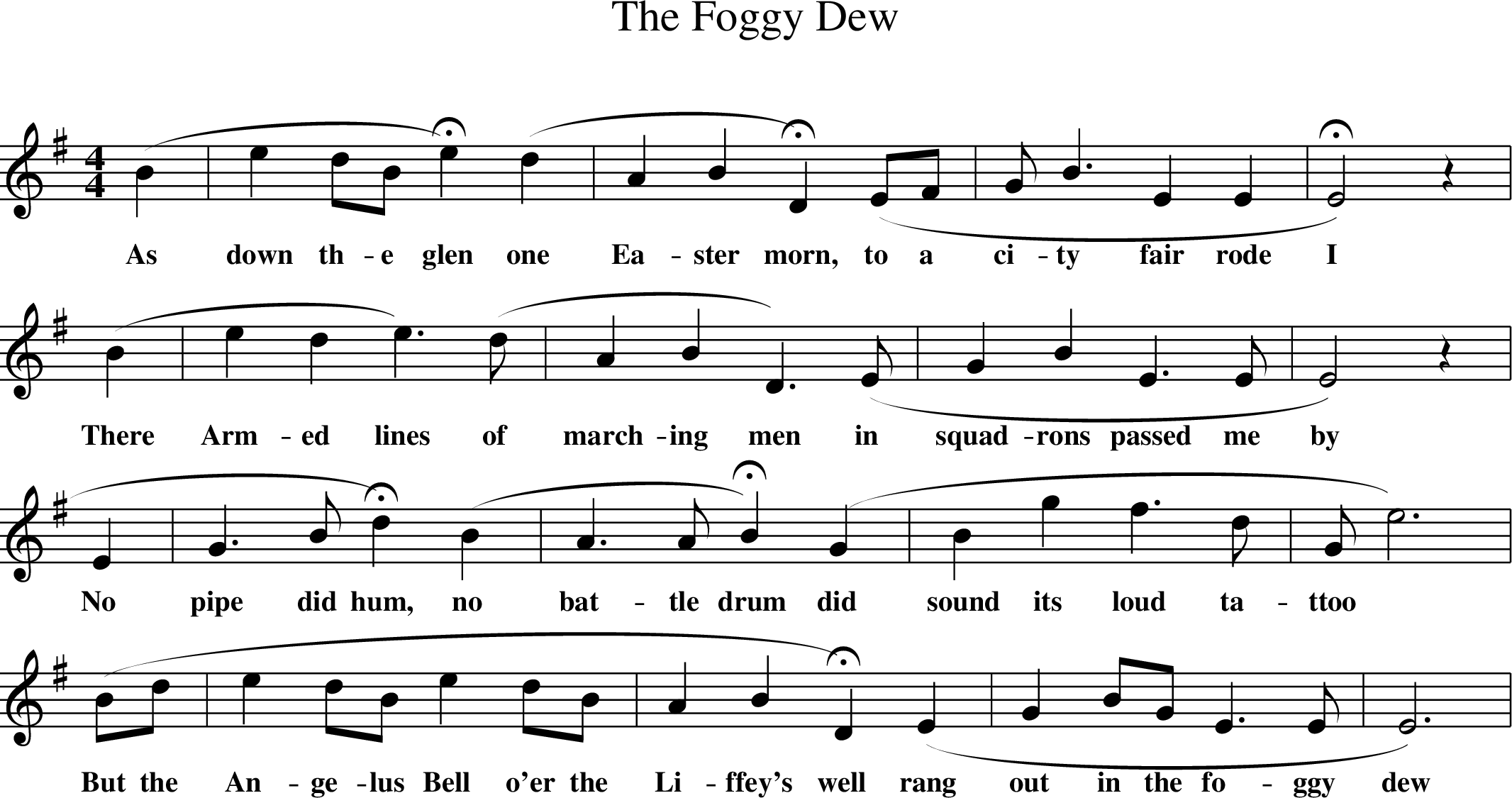 I believe that traditional dance tunes make a good contrast as they are phrased differently to most songs. This music exists to carry a dependable rhythm for dancing and as such it's phrases are almost perfectly uniform. Typically, these tunes are formed from two 8 bar parts, called 'A' and 'B', each of these itself being formed from four 2 bar phrases. As the phrases are so regular, it is easy to miss them if you don't know what to look for.

Everything mentioned for songs applies equally to folk tunes with the exception that trills are rarely used by traditional players, as noted before. The following score is the tune written out with sub-phrases, slides and fingered articulations. Rolls are written out in full. Play a descending slide between the first E and D. Note that the breath marks (commas) where added to show a few places where notes could be dropped to take a breath; they are not mandatory. 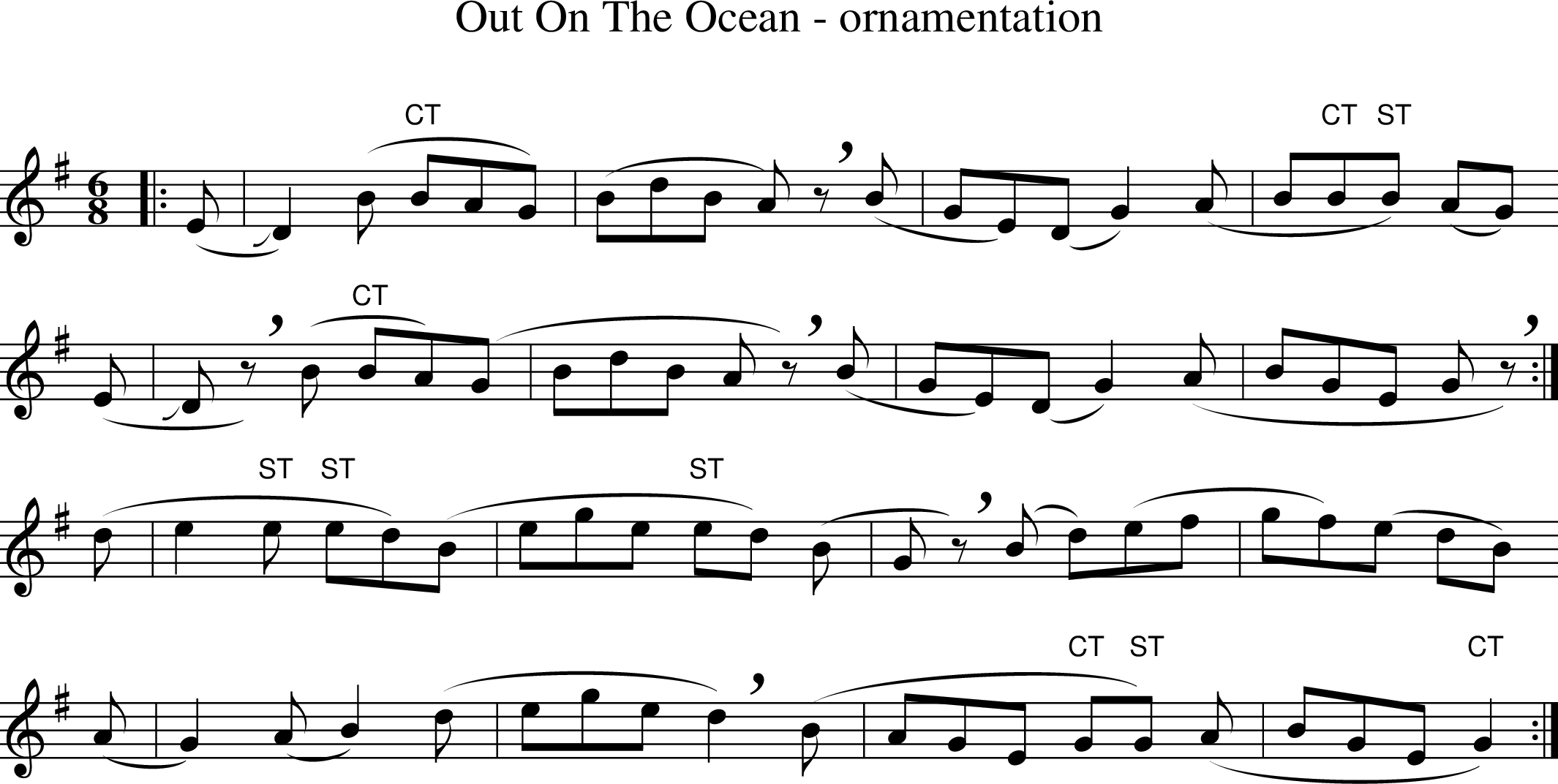 While the phrases of these tunes are usually regular, there are exceptions containing what I would consider irregular phrasing. The second part of the tune Haste to the Wedding is often played as follows, with a bar of two dotted quarters. They are often played staccato and are accompanied by a 'clap' when dancing. In my opinion, this audibly splits this phrase in half, making it irregular.

Hopefully, these examples have given you some ideas about how to use articulation and ornaments in your playing. On the ocarina, good articulation is perhaps the most important thing to create an interesting performance. As the ocarina cannot easily utilize volume dynamics, it is easy to create a lifeless performance without it.