This page assumes that you know how to hold your ocarina correctly.

When an experienced musician plays an instrument, the process is much like walking. It happens automatically, and the goal in learning the ocarina's fingerings is the same, to make them 'just happen' when you want to play a note.

In principle this is easy. Your subconscious mind will automate anything that you do frequently. So, learning the fingerings is just a matter of repeating them until they become automatic.

When you first start playing the ocarina there's a ton of different things to think about:

It may feel overwhelming, so wouldn't it be easier if you could eliminate some of these factors, and practice only the fingerings at first? Well, you can.

You don't have to blow the notes while practising fingerings. Just bend your elbows, and hold the ocarina in front of you. An added benefit is that you can then clearly see what your fingers are doing. 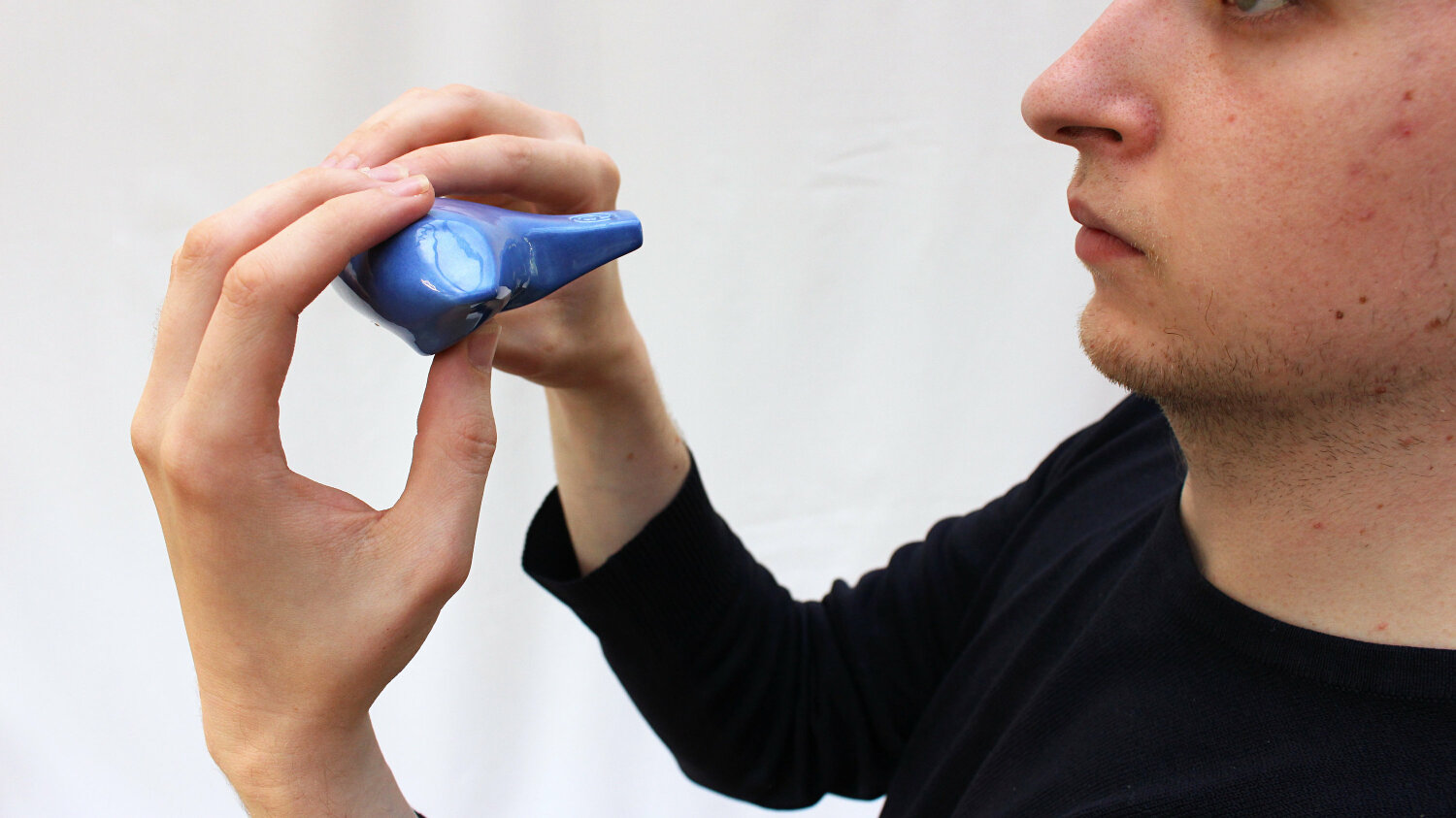 Usually, you learn the fingerings by learning the notes used in common scales, as this allows you to quickly start playing music. For this article, I have assumed the C scale of a C ocarina, and the same principle can be applied to other scales / ocarinas.

Practising the fingerings of a whole scale at once may also be overwhelming, and so it can be helpful to break them down:

Depending on how meany things you can hold in your short term memory, smaller or larger groups may be easier for you. Just do whatever you find works best.

To start learning the ocarina's fingerings, begin by practising its lowest 3 notes: C, D, and E. Finger each one in sequence and say its name aloud. I advise practising this slowly to a metronome, at about 60 BPM playing one note per tick.

Repeat this until you become comfortable with it.

If you have not played a wind instrument before, moving your fingers like this may be challenging. This is normal. Be patient and practise this slowly for a few minutes, and you will notice that it starts to get easier.

Also watch what your fingers are doing. When you lower a finger, you may find that you miss the hole and end up with the finger to the side of the hole or partially venting it, which will not produce a good sound.

You should be able to feel the edge of the hole underneath your finger, and try to keep it underneath the centre of the finger pad.

All of this will get easier after a few days. When you sleep, the things you have been practising will be automated by your subconscious. It will start to feel natural after a day or two.

As discussed in The fundamentals of playing the ocarina, the note that you sound changes with blowing pressure. If you want to play while learning the fingerings, using a chromatic tuner or drone is strongly recommended.

Once you are happy with the first three notes, work on F, G, and A. Use the same method described previously, moving up and down through the fingerings and saying their names.

As you lift fingers the instrument may start to feel unstable in your hands. You can stabilise it by putting the right pinky on the ocarina's tail to support it when transitioning from G to A. This is shown in the video below.

Do not lift your right pinky!

Notice that A is played by lifting the left ring finger and not the pinky. The pinky stays down to support the instrument, and the ocarina will play sharp if you play A with the pinky.

Lifting the ring finger by itself may feel awkward at first. It may help you if you move this finger with a finger of your other hand to learn how it feels. This is shown in the video.

Work on A, B, and high C using the same method. These are straightforward.

The final notes are also straightforward but require different technique; see 'How to hold an ocarina on the high notes' for details.

Play C, D, E, F, E, D repeatedly and slowly until you get used to the notes. They are demonstrated in the video above.

Subholes notes, and learning the fingerings of other scales

Some ocarinas have one or more 'subholes'. These are holes that are played by sliding a finger forwards so that it covers two holes, and allow you to sound notes below the tonic of your ocarina's key. You can learn these fingerings using the same method given previously: perhaps alternate between the tonic and subhole(s), saying the names of the notes.

learning the fingerings of other scales is also the same, you break them down into smaller fragments and practice them until you know them. The tool below generates audio for scale exercises for different types of ocarinas that you can use to practice with.