How to get the best sound from an ocarina's high notes

Ocarinas are inherently lossy instruments: as you open more holes, more air can escape, so their high notes are naturally airy to some degree. This can be compensated for in well designed ocarinas and player technique is also a big factor. But before going into this, you need to be aware of external factors that affect the perceived clarity of an ocarinas high notes.

It is important to know that what you hear as a player isn't the same thing an audience hears. Like all acoustic instruments, ocarinas have irregular sound projection: most volume goes directly forwards away from the voicing, and you by extension. The high notes often sound worse than they are because of this. For this same reason, how an ocarina sounds as a player will differ from recordings, and in produced recordings it is possible to artificially reduce airiness.

It is a good idea to hear how your ocarina sounds to a listener. Get someone else to blow it — preferably using good technique — and have a walk around. You'll notice that the ocarina sounds much louder if you stand directly in front of it. You will also hear that any airiness becomes much less obvious at a distance. Do this in several different environments if you can, outside and indoors.

Another point to note is ocarinas are very sensitive to room acoustics. Sound reflections create an effect called comb filtering which makes notes sound louder or quieter than they actually are. It can happen that your high note aligns with a 'dip' in your current location, making it sound worse than it is. To see how your ocarina actually sounds play it in an open outdoor environment.

There are two things you can do about this. Try different locations in your room to find one that sounds best. Alternately, you can get some acoustic treatment to reduce the reflections. I highly recommend this if you intend to record yourself. See 'How to record an ocarina' for more.

Finally, psychology is also a factor. If you are new to the instrument, you will spend most of your mental energy focusing on things like fingerings, what note you are going to play next, and rhythm. As you spend more time playing, these factors will move into your subconscious and you won't have to think about them. When this happens, you can pay more attention to the sound of your instrument. You will hear sounds that were always there, but you were not conscious of.

Now that you are aware of these factors, you may have realised that your high notes are better than you thought. If not, try the following techniques:

Blowing into the windway at the right angle 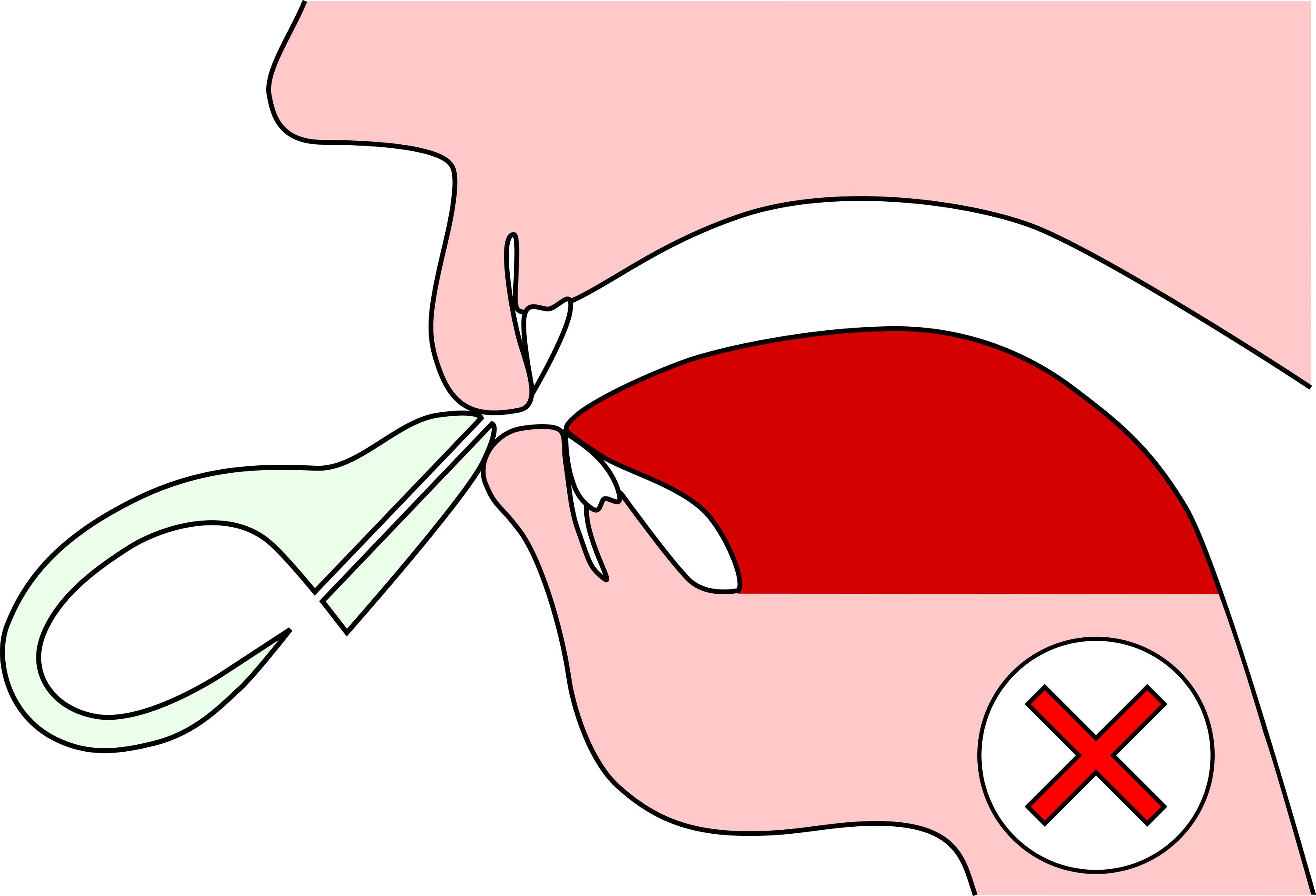 When tonguing a note, it is best to position the tongue further back along the roof of the mouth. This is similar to pronouncing the letter 'L'. Tonguing too close to the upper teeth creates a lot of turbulence and harms the high notes. It is particularly noticeable when tonguing multiple notes in succession. 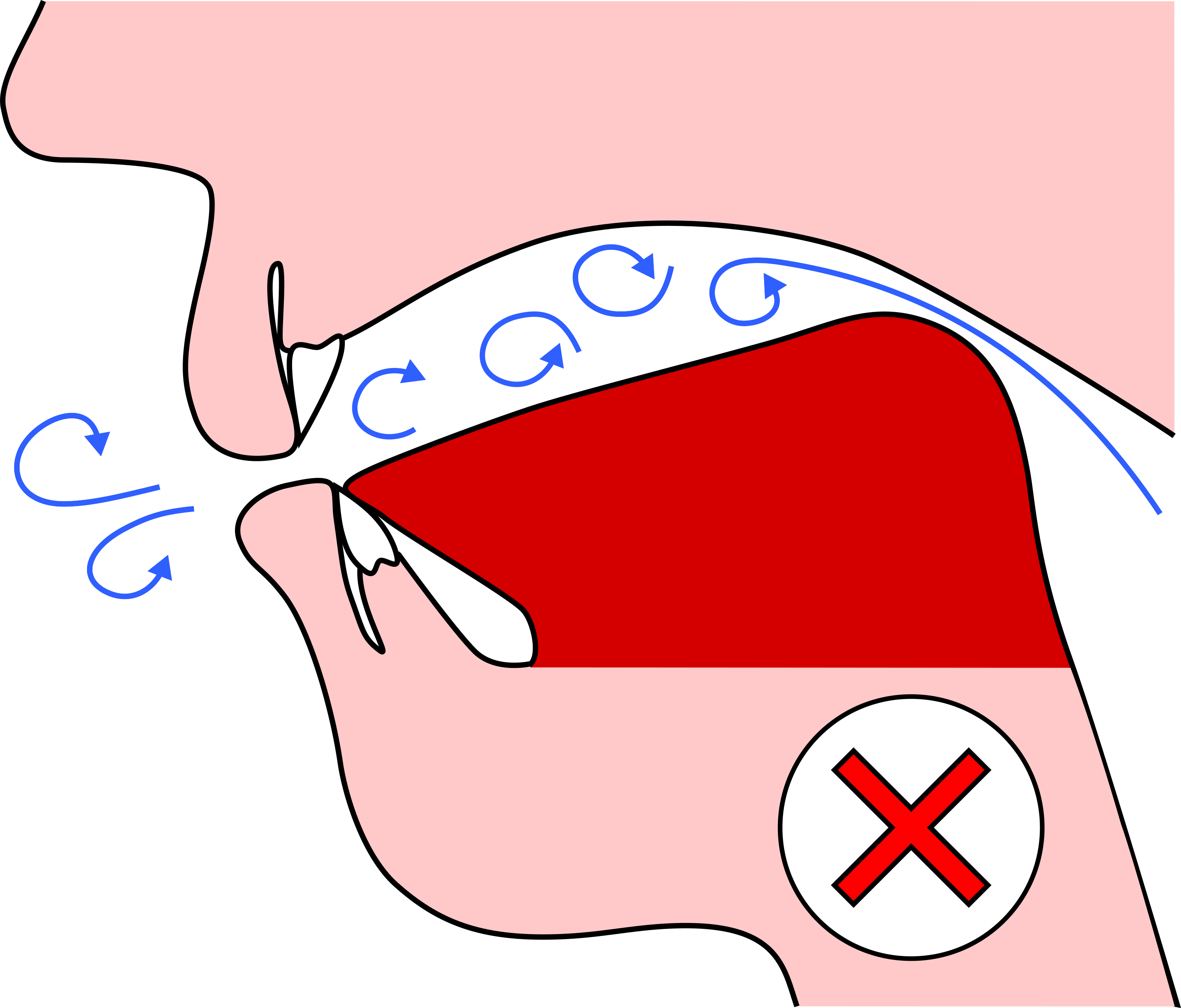 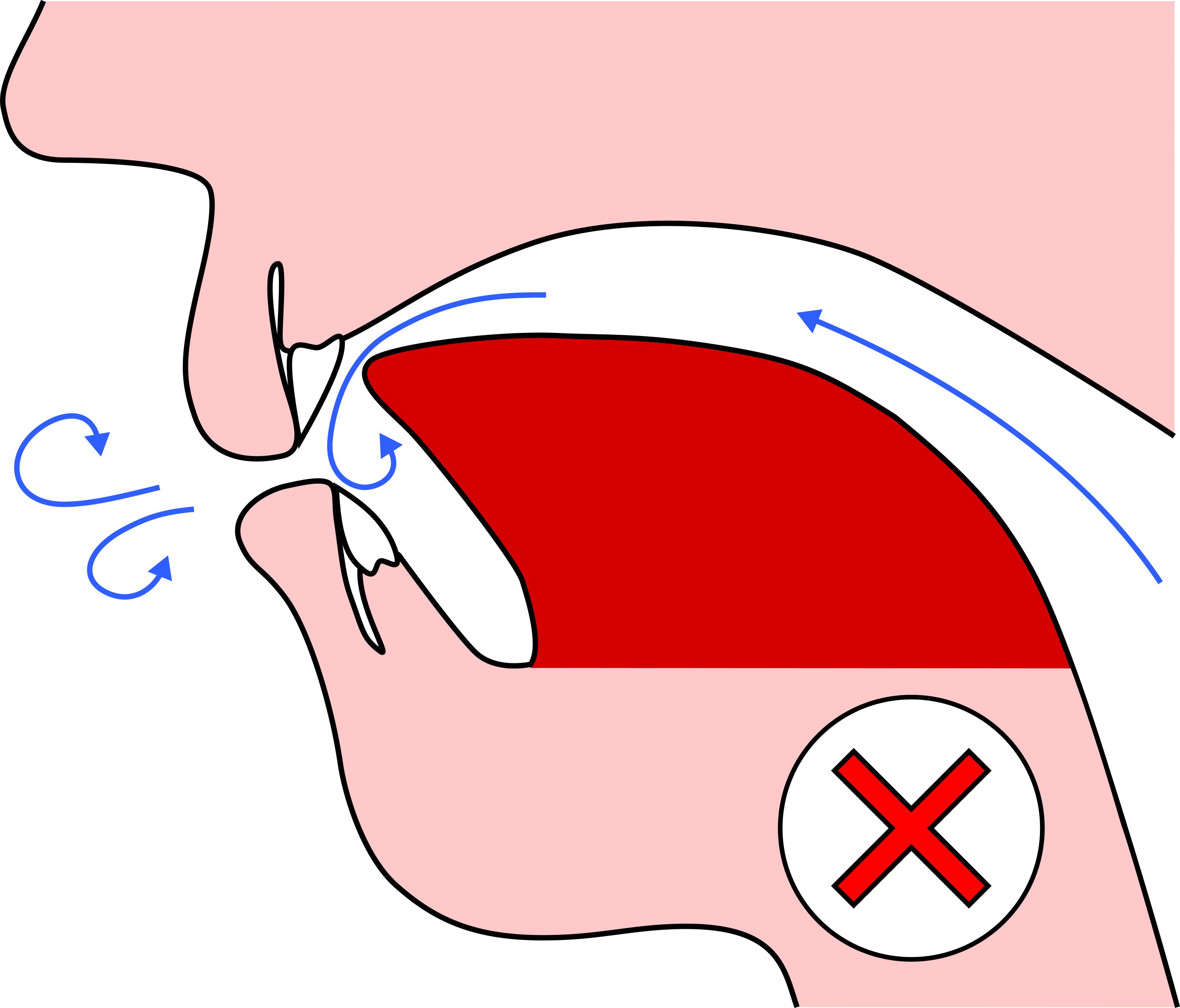 Do not shade finger holes

Even if a finger hole is open, there is a notable distance where the presence of a finger will 'shade' the hole, causing the ocarina to play flatter than it should. If you blow harder to compensate, the tone will sound more airy.

It is quite easy to have one of your left hand fingers close to the finger holes when playing the high notes. This is particularly problematic when using the palm grip on ocarinas with a short tail. It may also happen when using the 3 point grip: notice my ring finger shading the 'E' hole below.

Watch yourself playing in a mirror and make sure you are not doing this. To check how the high note sounds under optimal conditions, play it it while holding the ocarina by it's sides so no fingers are close to the holes. 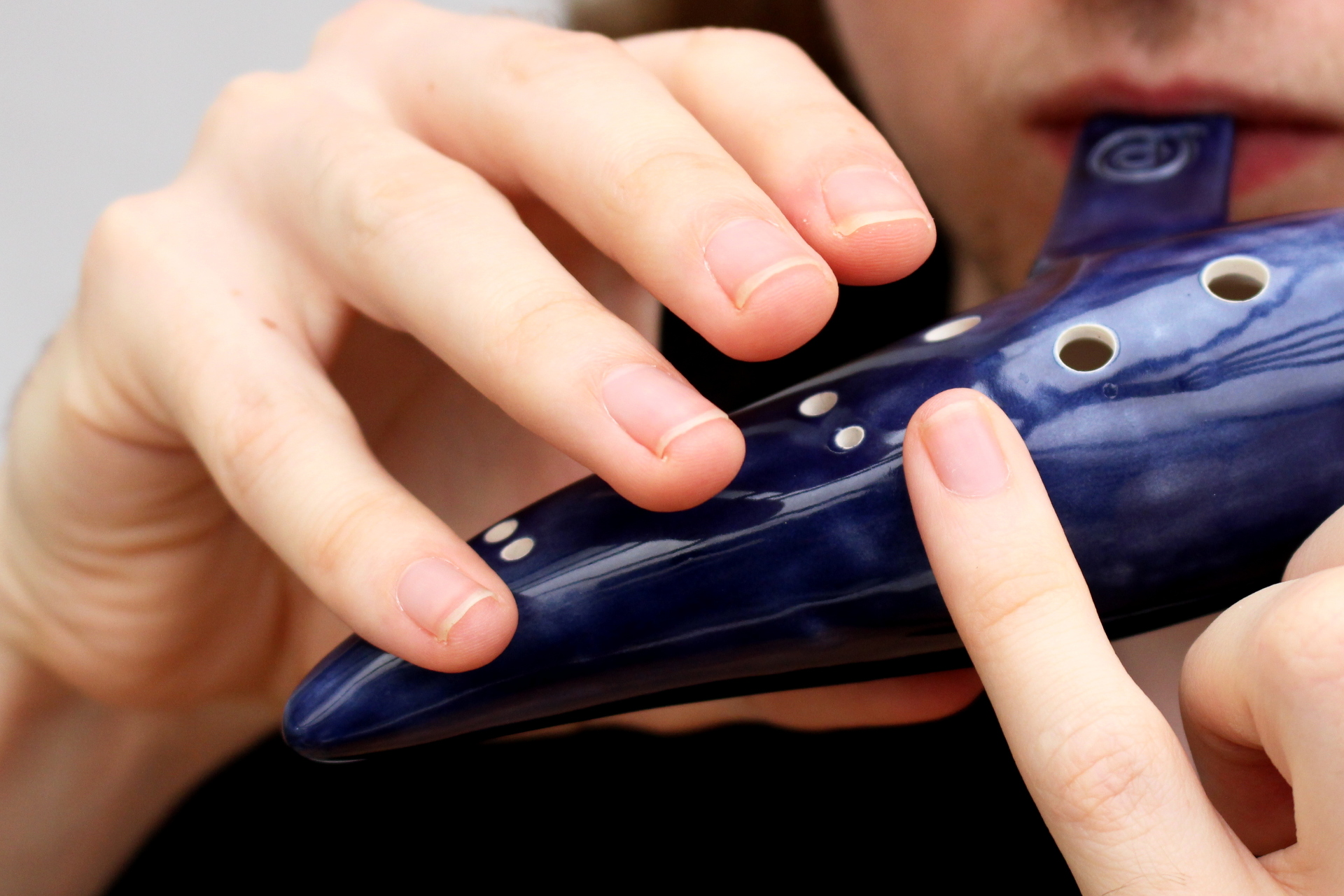 While you don't want your fingers too close to the holes, you also don't want to move them too far away. Excessive movement can harm your playing, especially at speed. There is a point where the finger no longer affects the pitch, around two centimetres/an inch above the holes.

It is easy to check using a chromatic tuner: play a long tone on a note in the middle of the range; on an alto C, G is good. Slowly lower the finger for the note below towards its hole and notice where the pitch starts to change. You must not alter your blowing pressure while doing this. Once you have found where the fingers no longer affect the pitch, aim to keep them just above this point. 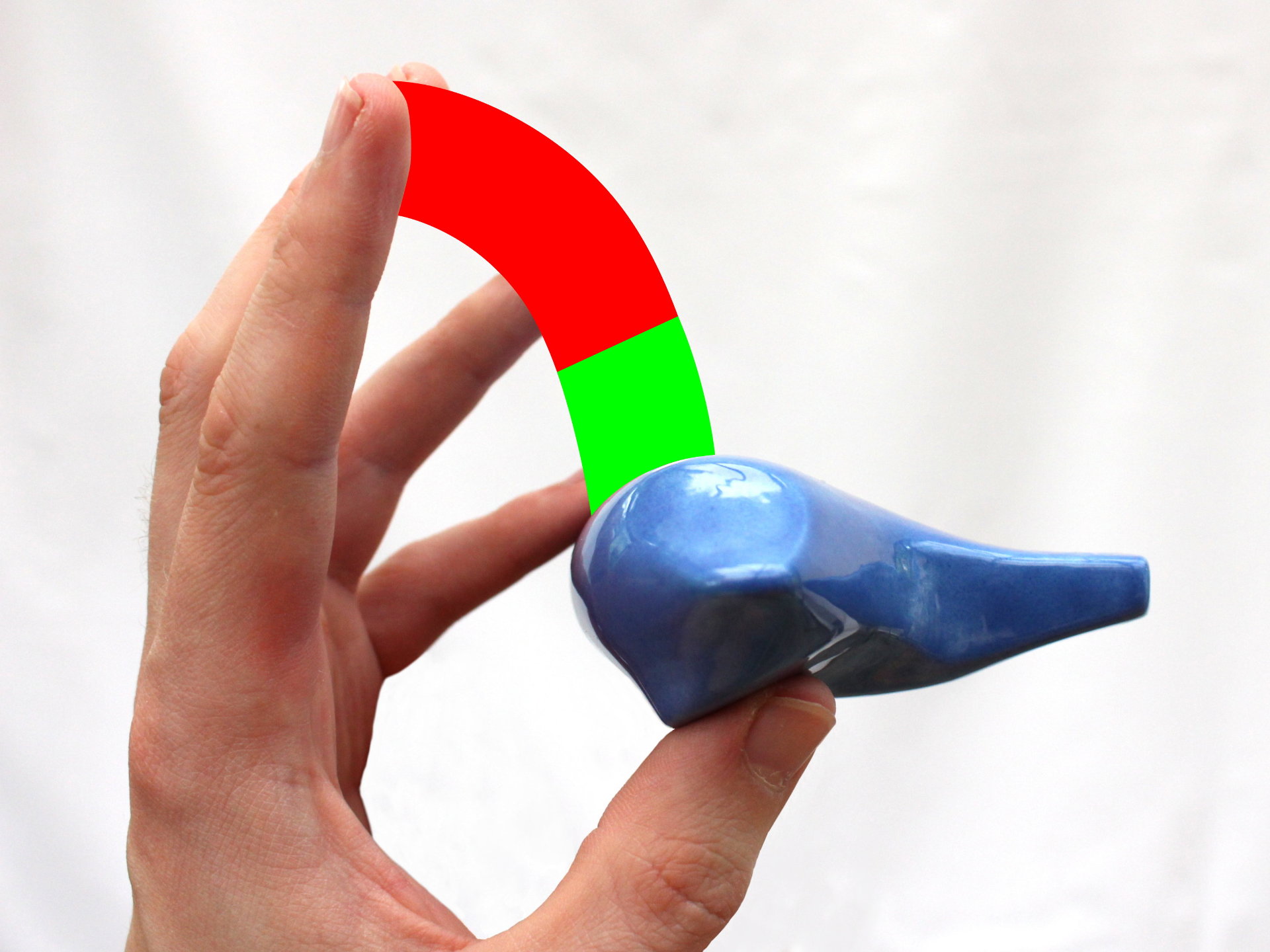 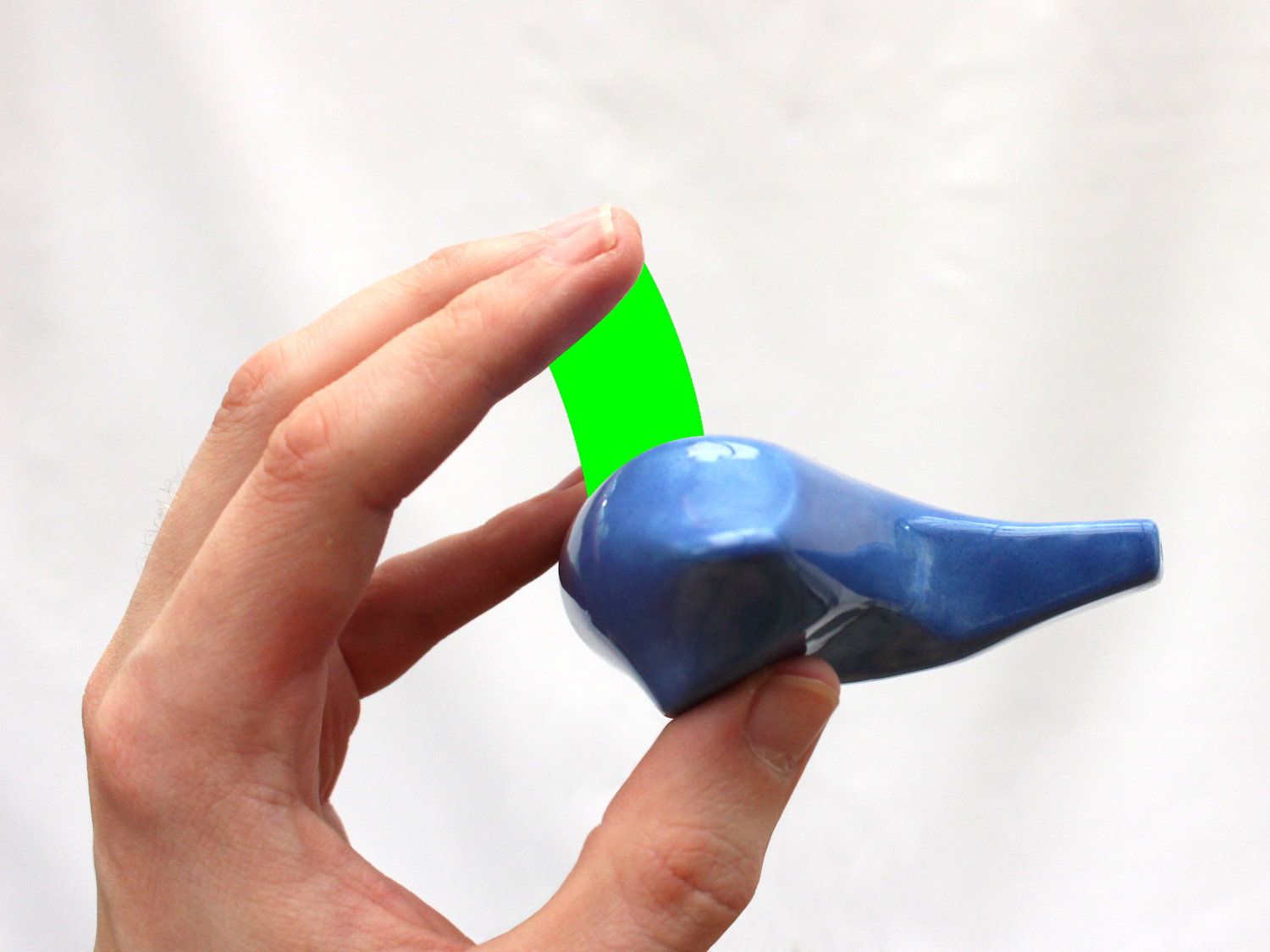 Keep your palm out of the air stream

As you play higher notes, you blow harder. If this fast-moving air hits your left palm, it makes a noise. Consequently you should keep your hand out of the air-stream when playing the high notes. If you're playing using the 3 point grip, an easy way to do this is to open the pinky hole by rotating the left hand from the wrist, pivoting on the index finger. 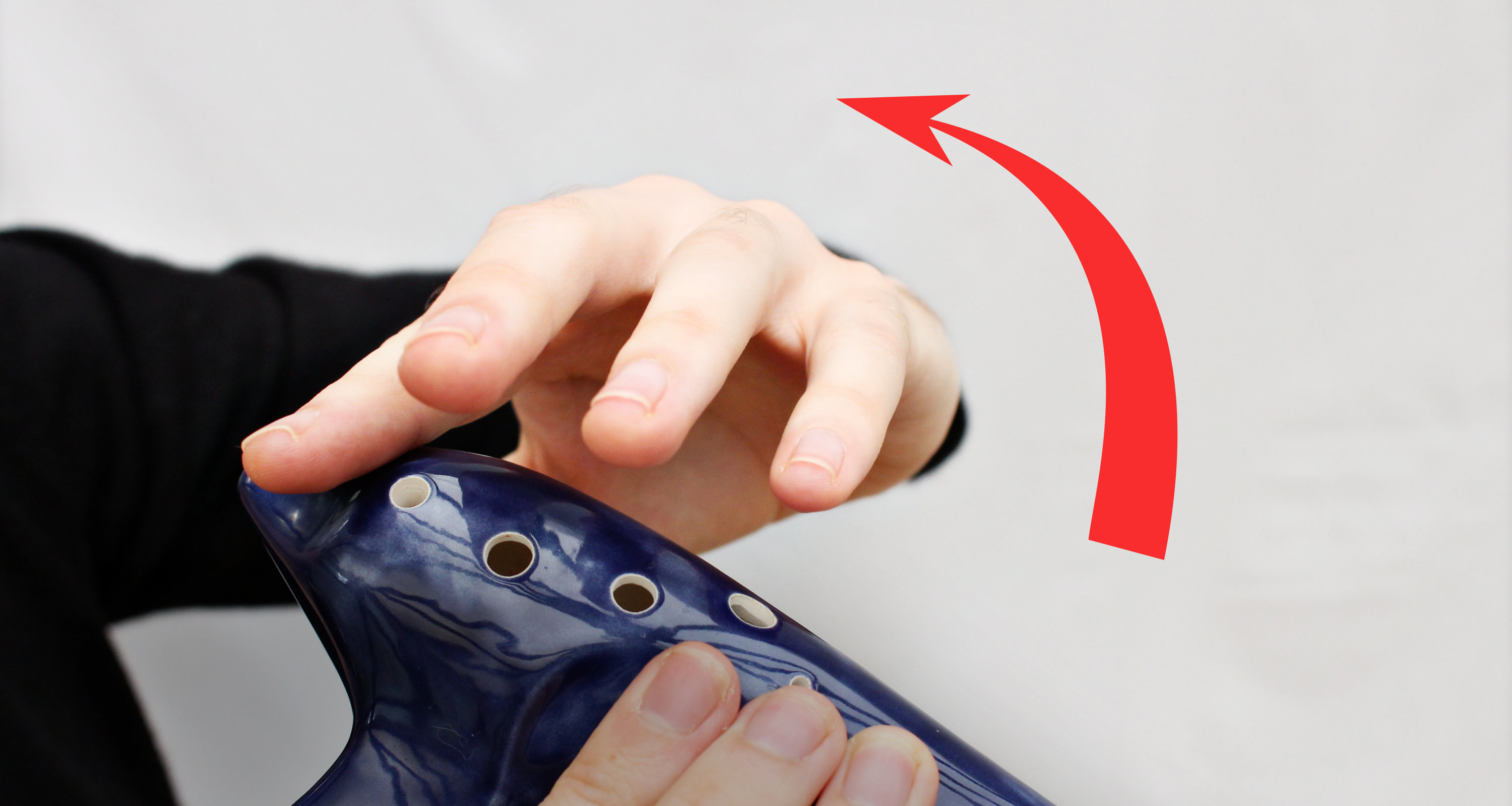 An ocarina's high notes have a relatively narrow pressure range in which they sound best. If you blow too softly or too hard, they will sound airy. Blowing too hard also brings out a harsh timbre. Determining the best pressure to use is fairly easy as their pitch changes with pressure: if your pressure is wrong, the note will be out of tune. You can check this easily using a chromatic tuner.

If you are playing in tune but notice that blowing softer or harder results in a better tone, it's probable that your room temperature differs from what the ocarina was tuned for. Playing in a colder room lowers the pitch and requires you to push to bring it into tune. Inversely you have to reduce your blowing pressure in warmer environments. There is a small range in which these compensations aren't noticeable, but it will sound poor in extremes.

What can you do about it? Always warm your ocarina it by playing some long tones. If this does not work, another option is to play sharp or flat of concert pitch and re-tune your accompaniment to match. If you must be in concert pitch, you should heat or cool the room to match the temperature that your ocarina was tuned for. You can also warm or cool the ocarina, which will help for a while.

Hopefully you've now figured out why your high notes sound airy. Some amount of airiness isn't a bad thing as it adds interest to the sound. It becomes far less obvious as soon as you start mixing with other instruments. However, the high notes should not be notably quieter than those below. If they are even after trying everything above, you probably have a bad ocarina.

You may have ran across the 'acute bend' from other sources, in which case you may wonder why I have not mentioned it. I believe this is an acoustic effect that increases the perceived loudness to the player, by bouncing sound off their chest into their ears. From what I've observed of others doing this in person, it makes little difference to an observer's perspective. It can sound worse as the sound coming from the voicing is directed downwards, away from the audience. I do not recommend using this technique for this reason; plus it is ergonomically awkward and looks silly in a performance.