Within sheet music, rhythms are notated as subdivisions of time, and the common way of learning to read them is to 'count' by assigning syllables to different beats, having never heard the rhythms beforehand. I believe that this approach is both unnatural and unmusical. Within a human performance, there are often subtle changes in the rhythm that cannot be represented in sheet music, and taking it too literally can sound mechanical.

Consequently, I believe that the best way of reading rhythms is to forget about counting, and learn the rhythms by ear. The human mind is very good at associating information, so if you listen to or clap a rhythm while also looking at its notation, the mind will connect the two, and you will start to instinctually know the sound of a rhythm when you see it.

To me, this approach makes sense as it is analogous to how languages are learned. When a child learns their first word, this does not come from studying phonemes but from listening. When they learn to read, many words are learned by associating known sounds to the sight of the words. This is especially critical with languages like English or French, as many words are not written phonetically.

To put this into practice, try copying the following rhythm by listening to it and then clapping it. I would guess that you can do this pretty easily. Most people can copy even complex rhythms by listening and replicating what they hear.

At first impression, this technique may seem arduous; aren't the rhythms of every piece of music different? While this may be true of rhythms as a whole, it is not on a smaller scale. Rhythms in the large are formed from smaller rhythmic fragments—in a sense, rhythm 'words'—and the total number of these in common use is relatively small.

For instance, the example that I gave above is built from two distinct patterns. The first of these occurs twice, while the second one occurs only once. Have a listen to them:

The goal is to learn these fragments subconsciously, such that you don't need to think, you just 'hear' how it sounds in your mind the instant you see it. Do note that the transition to subconscious happens during sleep, so don't expect immediate results.

This full rhythm is written in sheet music like this. I deliberately used a complex example here, as while you can probably copy the rhythm easily when you heard it, the notation looks complex and may be intimidating.

You may already know that sheet music represents rhythms as fractions of time. Notes of different shapes represent different time durations. Starting from the top of the diagram, a simple circle is called a 'whole note'. A circle with a stick is called a 'half note', and has a duration of half of a whole note. Continuing downwards, you have the quarter note, eighth note, and sixteenth note, each having a duration half that of the layer above. 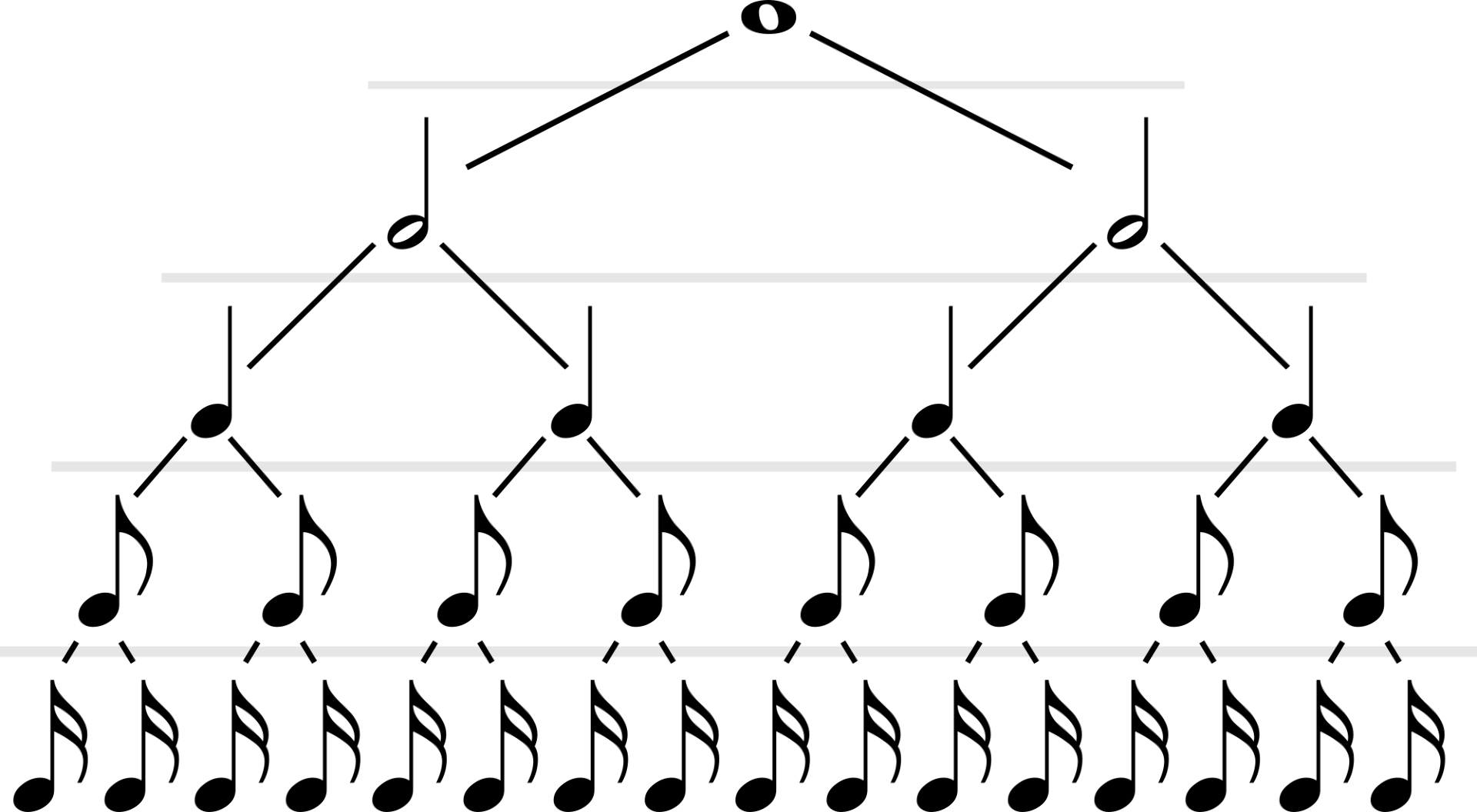 Note that I am using the American names for note durations, as they have a direct connection to common language. Things are easier to learn when they are connected to things that you already know.

Due to this regular division at each step, the same rhythmic patterns can occur on different time scales; i.e., you can play the same rhythm faster or slower. The example below demonstrates this idea: the second example is the same rhythm, but is played half as fast. This may not be apparent at a glance as sheet music represents this using different notes.

Because of this, you can get a lot out of learning a little. Learning a rhythm once will allow you to apply it to many different contexts by just playing the same fragment faster or slower.

In addition to dividing time into halves, quarters and so on, other divisions are possible. If a note is followed by a dot, its length is extended by half it's duration. For example, a dotted quarter note has a duration of a quarter plus an eighth. It is common to have this occur between pairs of notes, and either the first note or the second can have the dot. You can hear how this sounds below.

It is possible to create notes of essentially any duration by joining or 'tying' together one or more notes. A tie is an arched line between the heads of two notes, and indicates that they should be played as a single long note. The first example here has the same effect as a dot.

Another way of creating irregular subdivisions is with triplets. A triplet is indicated with a bracket or slur mark above or below a note, with a number 3 next to it; see the next below. This example is a triplet of three quarter notes. These three notes are played in the duration of two quarter notes by dividing this time into three equal parts.

Within sheet music, rhythms exist relative to bars. A bar is a container or bucket delineated by vertical lines that holds a fixed duration of notes. How many and which kind of note is denoted by the time signature. A common time signature is 4/4. The bottom number states the type of note, and the top how many of them. Thus 4/4 means 'there are 4 quarter notes in a bar'. In this same period of time, you could have 1 whole note, 2 quarter notes, 8 eighth notes, or any combination of them with the same total duration.

You should note that while a time signature looks like a mathematical fraction, it is not a fraction. In mathematics, 4/4 would be the same as 1/1 but that is not true in music. Time signatures may imply other information such as the beat, the steady rhythm that you would tap your foot to. 4/4 often implies that the bar should be divided into 4 quarter note beats. 2/2 Implies that there are 2 half note beats per bar.

This idea is so common that it is often used to explain time signatures. This explanation states that the top number is the number of beats in the bar, and the bottom is the note that 'gets' this beat. While this does work for 4/4 time, it fails in the context of other common time signatures. For example 6/8, while this suggests 6 beats per bar, there are only 2.

6/8 is an example of compound time, a convention of time signatures where notes come in groups of 3. It exists as a means of having a bar containing two dotted quarter notes, essentially 2/(3 times 8) time. Other examples are 9/8 and 12/8, which should be read as 3 groups of 3 8th notes, and 4 groups of 3 8th notes.

Due to irregularities like this, it's better to think of the time signature as telling you only how many and which kind of note to find in a bar. The beat is often implied in other ways, such as how the notes are beamed. If a metronome mark is included, this also tells you the beat. A metronome mark can be seen here, stating that there should be 120 dotted quarter notes per minute.

In some regards, bars are an awkward concept forced upon music because a more natural structure is a phrase, especially in vocal music and derivatives. A phrase is a complete musical idea, and often corresponds to a sentence in a song. The phrases often do not align with the bars, and it is not uncommon to have rhythms that span multiple bars due to ties. I have marked the phrases in the following song: 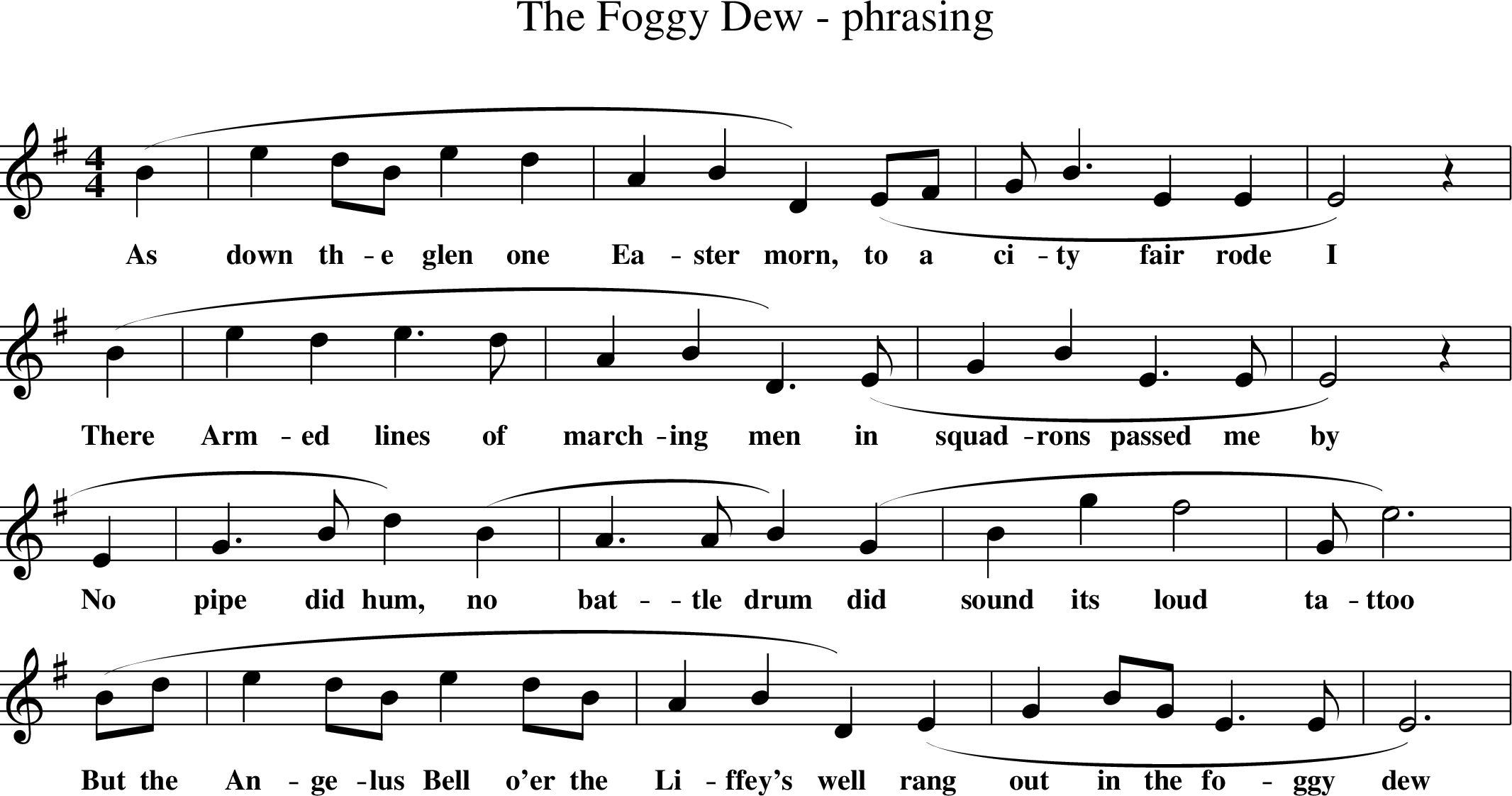 Now that you have the basic idea, how do you practise? It's really just a matter of finding a large amount of sheet music, and a means of hearing the same rhythms. Ideally, you would want to work one on one with a with a teacher, who can either play or clap rhythm fragments at a speed you can copy. However, if this is not possible, try to find a recording and sheet music for the same piece of music. Software exists which can loop sections of a recording and slow it down. As a last resort, you can rebuild the rhythm in a MIDI sequencer. These tools usually represent notes as bars in a grid, with the horizontal axis representing time and vertical axis representing pitch.

Once you have this, listen through the music or look at the notation, and aim to find short fragments to practise. In pieces with few notes of long durations, it may make sense to learn the rhythm of a whole bar, or offset to align with a phrase as noted before. Where there are more notes in a bar, you may instead wish to break it down further into smaller fragments. Practise them by first listening, then looking at the notation. When you approach learning to read rhythms, I strongly recommend practising them separately from reading the notes.

I can't stress highly enough the importance of listening to human performances as you learn rhythms. While sheet music presents rhythm as an mechanical subdivision of time, in a human performance the rhythm often deviates from this. Time can dilate and contract to convey emotion, and notes can be played slightly earlier or later than expected. These details can be considered to be like accents in spoken languages; writing denotes the words, but it is read in the accent of the reader.

Notation can be more or less specific with these details. Classical scores are often very specified, while folk music often sounds completely different to what the notation suggests. But on a small enough scale, there are always unspecified details. When an experienced musician sight reads, they overlay details that they have learned—whether consciously or not—through playing and by ear.

Counting is a useful skill to have in your toolkit. It can be a good way of developing tighter rhythmic accuracy, as it forces you to think about what you are doing. However, as stated before, I believe that you should begin with listening. Learning a rhythm by counting is kind of like sounding out a word a syllable at a time. It isn't something you want to do when playing at speed.