Multichamber ocarinas and their tuning systems

If you want to know whether to start with a multichambered ocarina or a single, please see 'choosing your first ocarina'.

Multichamber ocarinas are an extension of the single chamber design. Due to their physics, a single chamber is only able to sound a limited range, and multichambers were developed to address this. The first chamber (labelled '1' in the image below) is almost identical to a single chambered ocarina. Additional chambers are added to the right hand. These are tuned to a higher pitch, and allow notes to be played above the range of the first. A double ocarina has one additional chamber, which is labelled '2'. Triple ocarinas simply add another chamber next to this one. 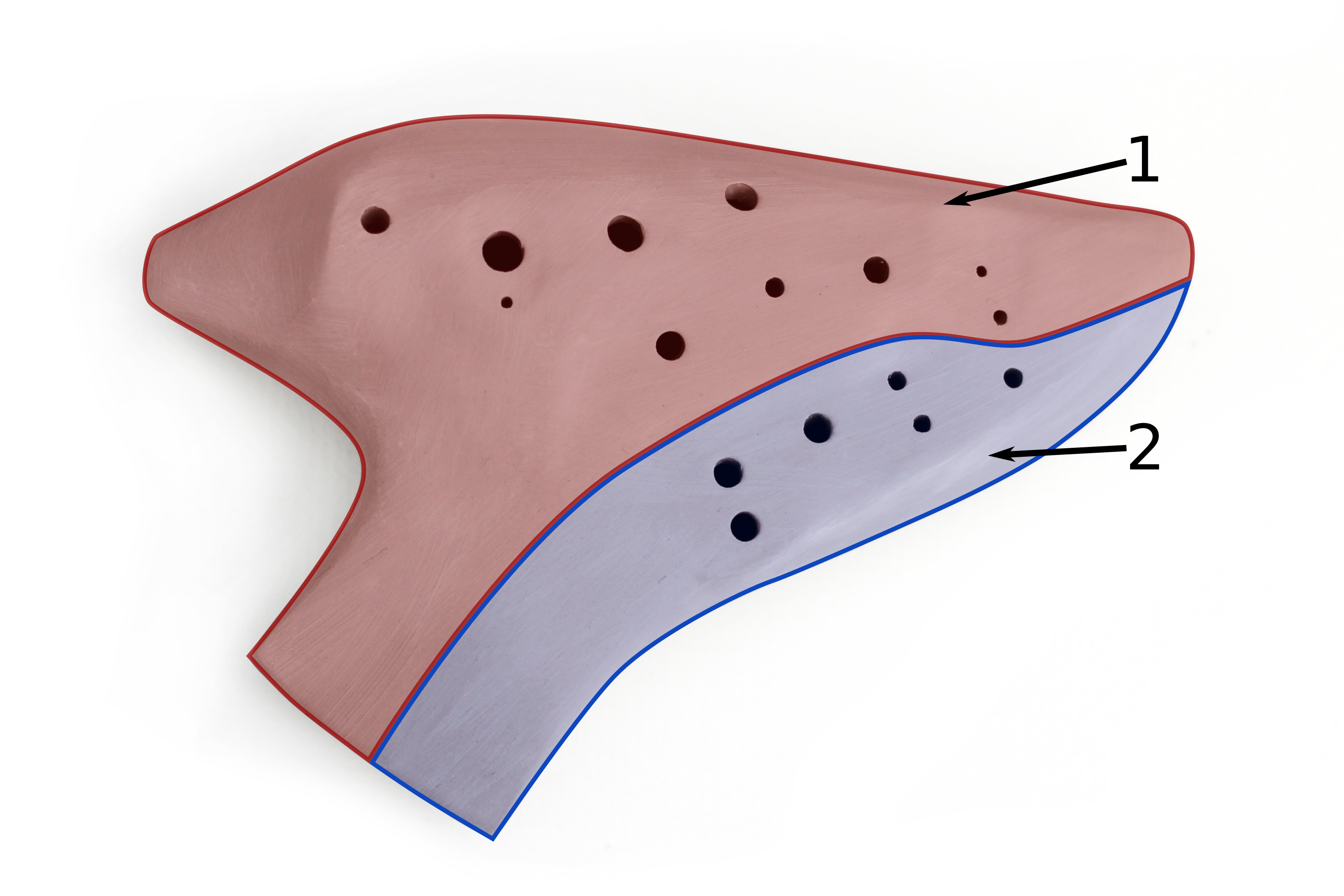 Relative to single chamber, each chamber of a multichambered ocarina provides a smaller part of the instrument's total range. A maker can thus use the part of each chamber's range with the best tone, discarding higher or lower range which often produces undesirable tonal characteristics. This gives a maker much more freedom to craft the tonal character of their instrument. Designs can be used that would not produce enough range for a single chamber ocarina.

Multis are also able to offer better ergonomics by eliminating the right thumb hole. Chambers are tuned to produce different ranges of notes. For example, the first chamber on an alto C double plays to D. The next note in the scale is provided by the second chamber. The player thus moves their fingers to and blows the windway of the second chamber. There is no need to cover the holes of an inactive chamber.

It is possible to balance a multichamber such that it can balance between the left thumb and pinky finger, much like a single. This makes supporting the instrument vastly easier as, with the right thumb hole eliminated, the ocarina has a single constant support point like other wind instruments. If an ocarina won't balance like this, many more fingers are required to support it, and while they are doing so, it is difficult to use them to also cover holes. 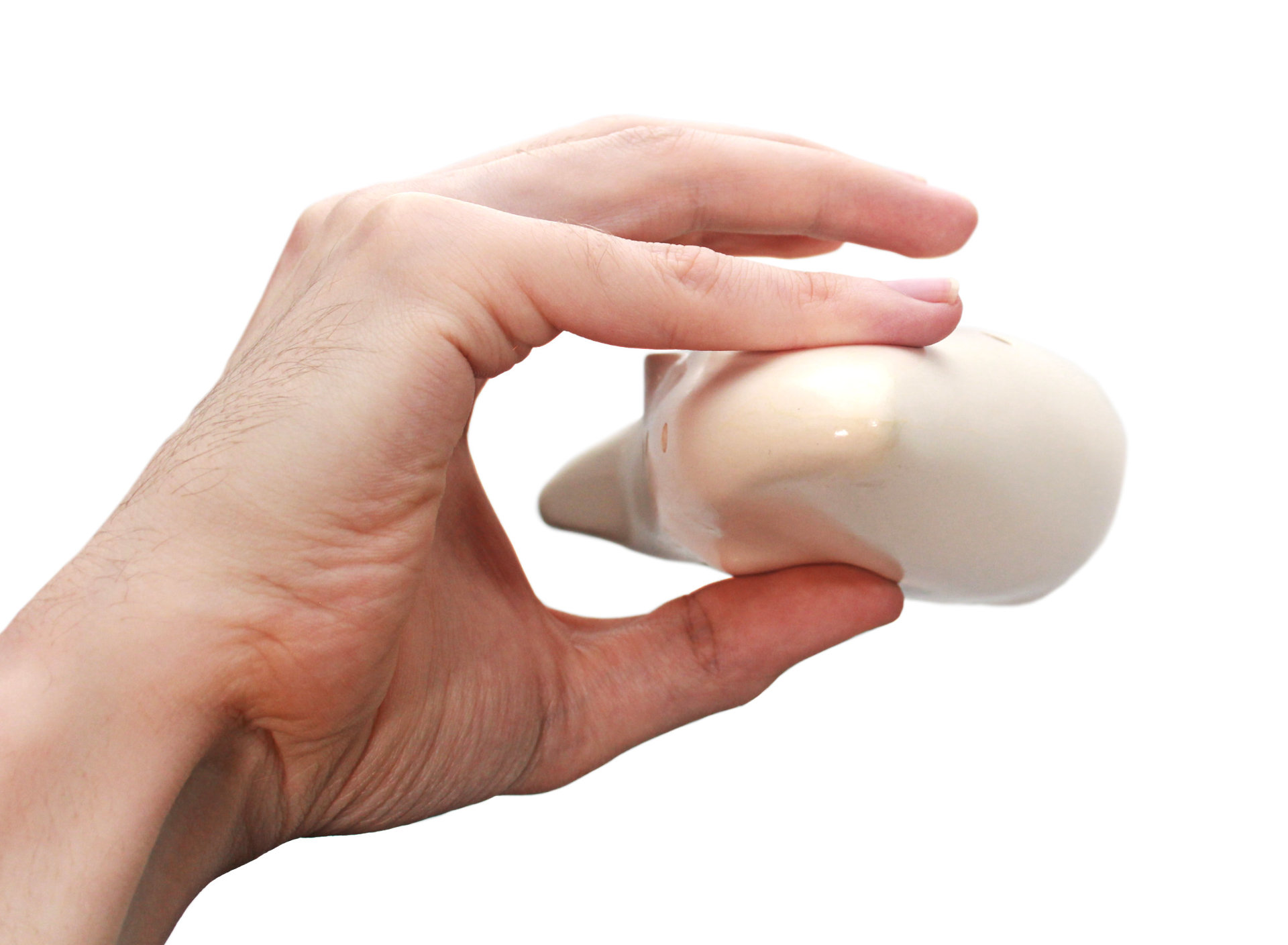 How multichamber ocarinas are tuned

Because their pitch depends mostly on the total area of open finger holes, ocarinas can be tuned in different ways, with the most common systems for multichambers being Asian and Pacchioni. The Asian system offers the most range, while the Pacchioni system aims for player convenience, offering features which can make complex music easier to play. The difference between these two systems is only apparent in higher chambers, as the first is almost identical.

Note that ranges are shown assuming an alto C ocarina. These ranges can be transposed to get the range of multichambered ocarinas in higher or lower keys.

In order to keep the left pinky hole to a manageable size, it is usually tuned to a semitone, D♯ on a C instrument. This hole can be tuned to a whole tone, giving the first chamber an additional diatonic note. This does not affect the tuning of the second chamber.

The Asian system tunes the second chamber as a linear extension of the first. On a C ocarina, the highest diatonic note of the first chamber is D. The second chamber begins on E and continues upwards to C an octave higher. A double ocarina with Asian tuning has a total range of two octaves.

On an Asian system in C, the highest note on the second chamber is normally C, and the third chamber continues linearly from this point, giving additional range from D to approximately A. This gives the whole instrument a total range of about two octaves and a sixth.

If a fourth chamber exists, it continues this pattern in the same way.

Higher chambers on the Pacchioni system

The Pacchioni system tunes the second chamber an octave above the first. If the first chamber is C, the second begins from C an octave higher. Relative to the Asian system, the total range is reduced by two diatonic notes. However, the instrument gains two notes of overlap between the chambers. C and D can be played on both the first and second chamber. These notes are highlighted below.

Note that Pacchioni system ocarinas can include a subhole on higher chambers, giving a semitone below the ranges stated in the following sections. This hole is positioned between the voicing of two chambers and is played with the left thumb. As the thumb has to move a long way to reach it, it is only practical for playing notes that are nowhere near a chamber break.

Having this overlap is useful because real-world music often spends time around a single note. The overlap increases the chance that a note will exist on the same chamber, reducing the need to switch chambers. It also gives you more freedom to place chamber switches in places that align with the phrase breaks of the music. Certain ornamental possibilities also become practical, such as a D to E trill on a C instrument. Both notes exist on the second chamber of a P system ocarina.

The following tune exemplifies the reduction in chamber switching. Slur marks indicate sections played on the second chamber. This tune is usually played in D and works well on a Pacchioni system double in D. I have transposed it down a whole tone to stay consistent with the page.

Something that may seem odd about the fourth chamber is that it begins on an accidental, A♯ on a C instrument. This is because the chamber uses the same fingerings and has the same intervals as the lower three chambers. It is covered in more detail on the page 'Multichamber fingerings'.