Eliminating the dual function of the ocarina's right thumb hole

Italian ocarinas and directives of the instrument have two thumb holes, and the second of these serves a dual function:

This dual function greatly complects the task of playing the instrument, something that became very apparent to me while writing the page Playing the high notes of single chambered ocarinas. This arises naturally from the ocarinas physics, but I now consider it a design flaw. Almost all wind instruments use the right thumb only for support, with very good reason.

I can see considerable benefits in eliminating this issue. It would greatly reduce the difficulty of learning the ocarina as a new player. Eliminating a technical challenge also raises the skill ceiling for advanced players. Issues like playing the high notes at very high tempo, or leaping between the highest and lowest notes become trivial.

This dual function is not an unavoidable characteristic of the ocarina, and there are two main ways that it could be solved:

My idea for eliminating this hole is to combine the left index and middle finger holes, leaving a single hole on the left middle finger sounding an interval of 3 semitones:

As can be seen below, the sizes of the holes can be kept manageable through selective undercutting. The index and middle finger holes have an undercut, similar to that used by Noble. 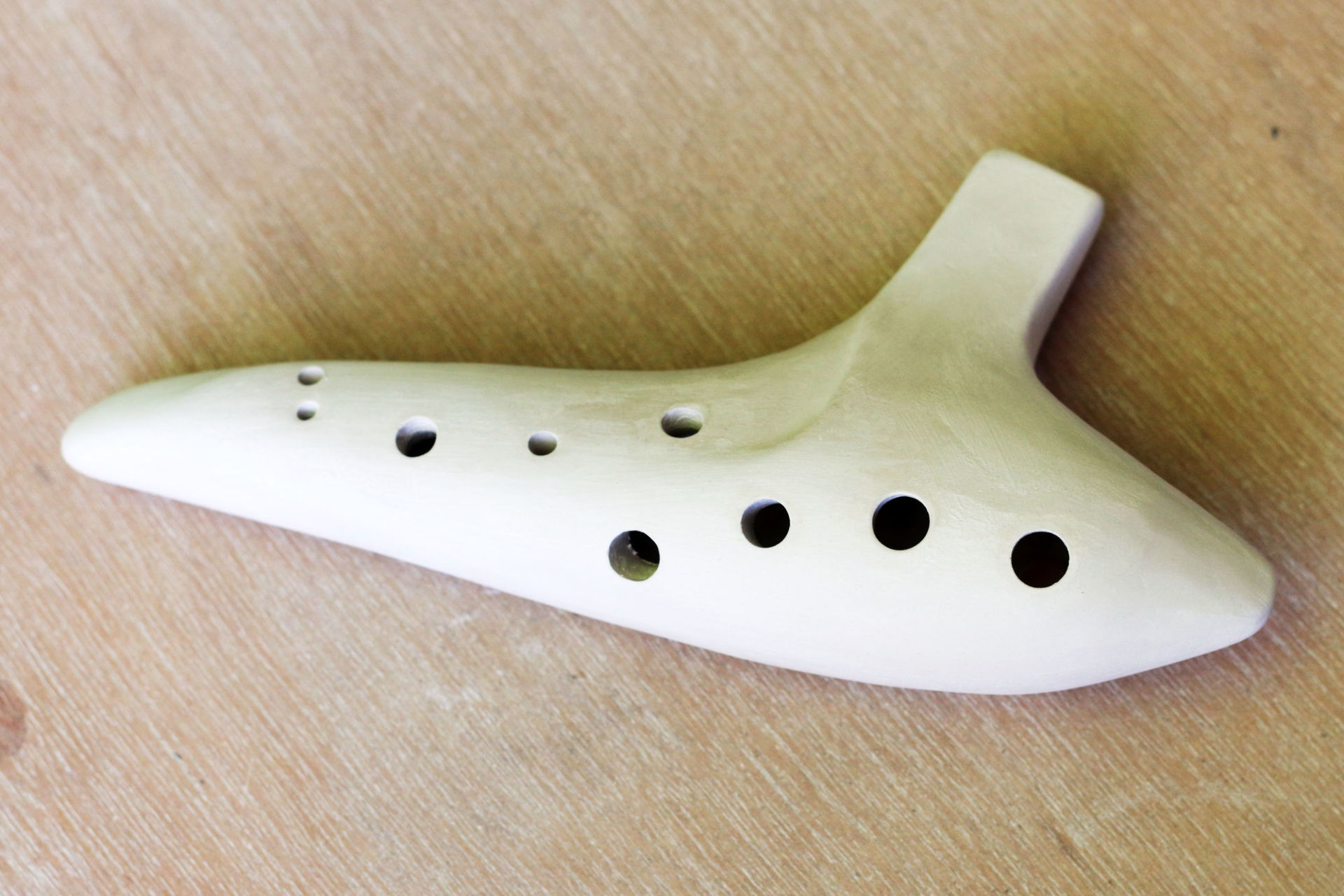 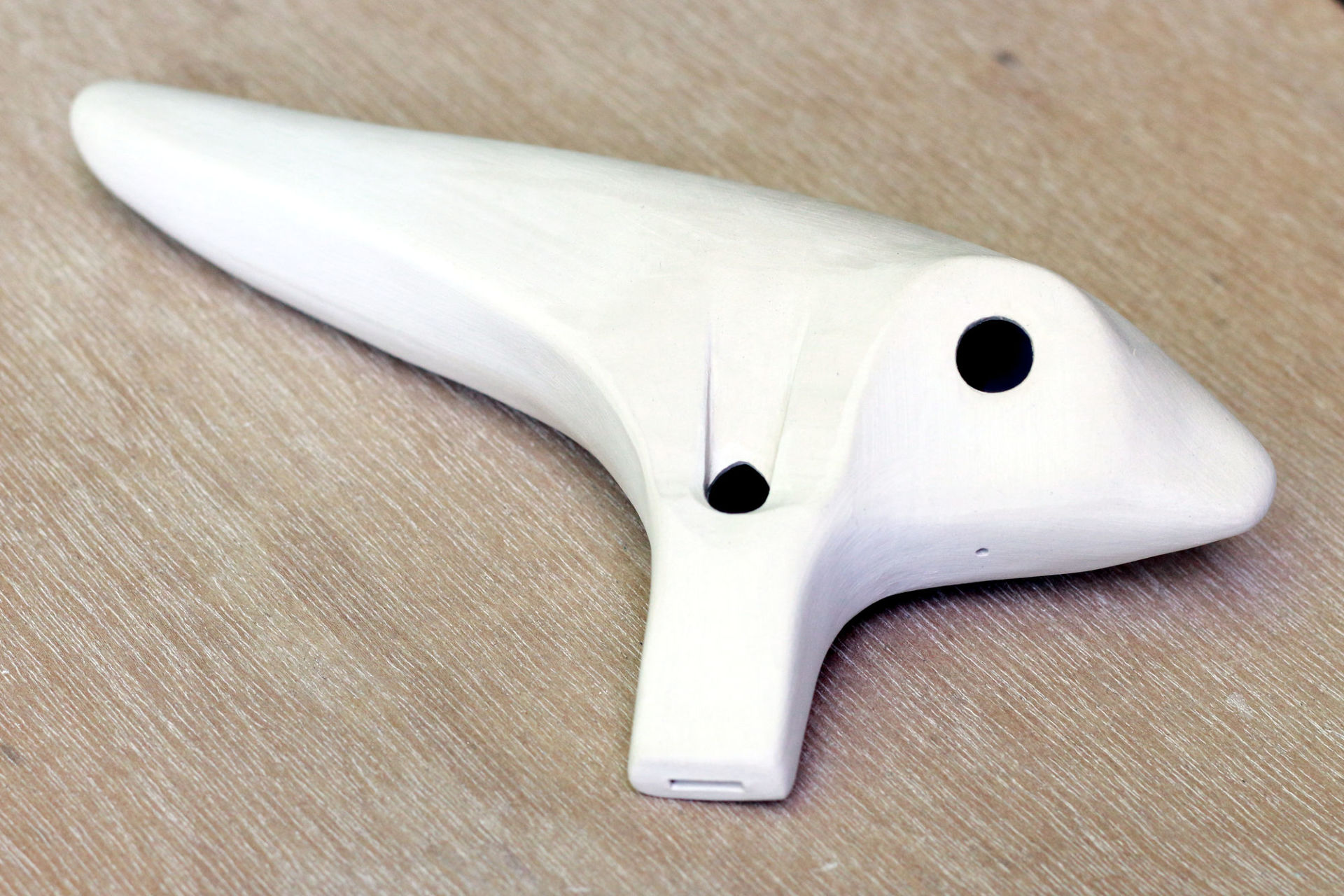 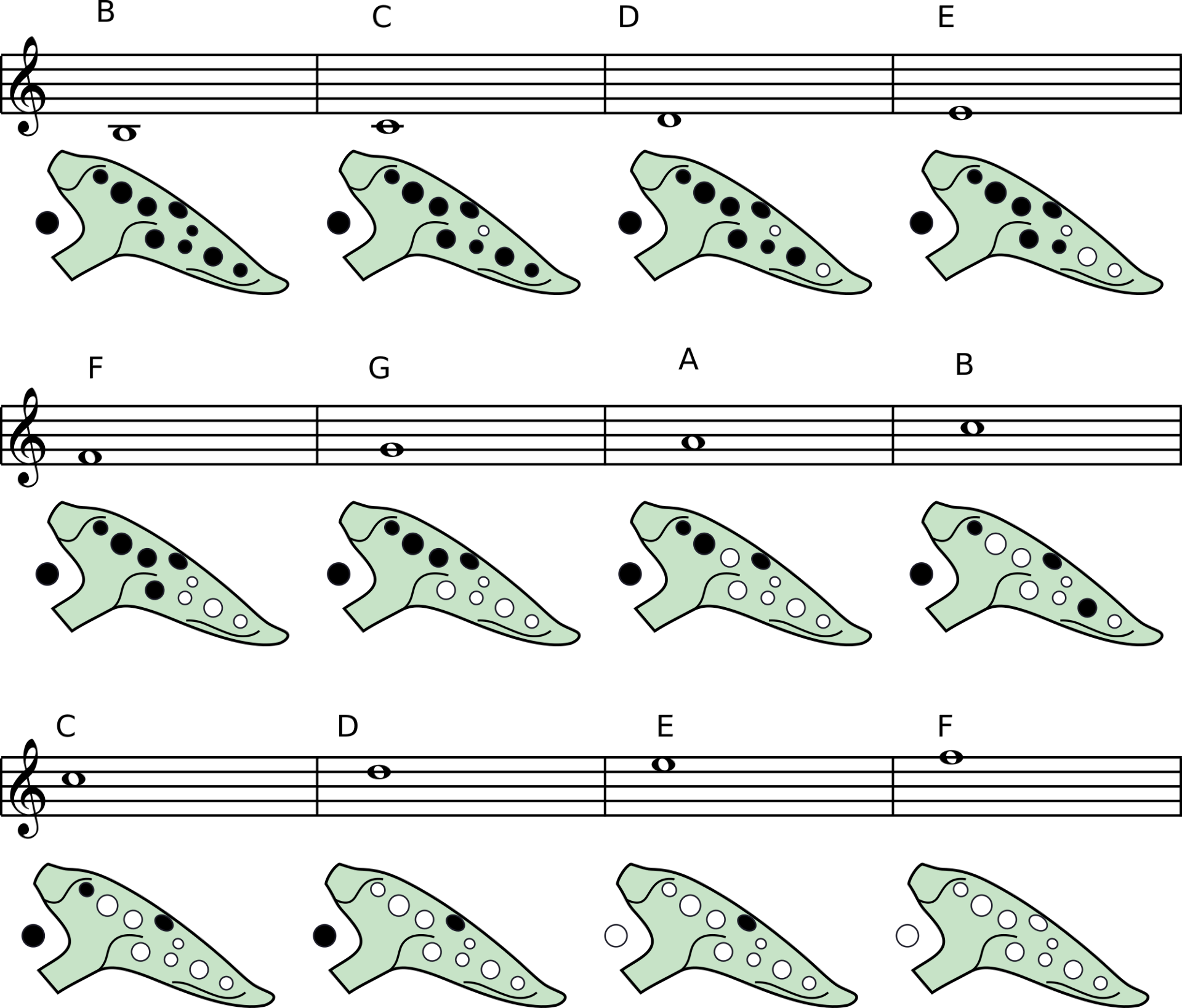 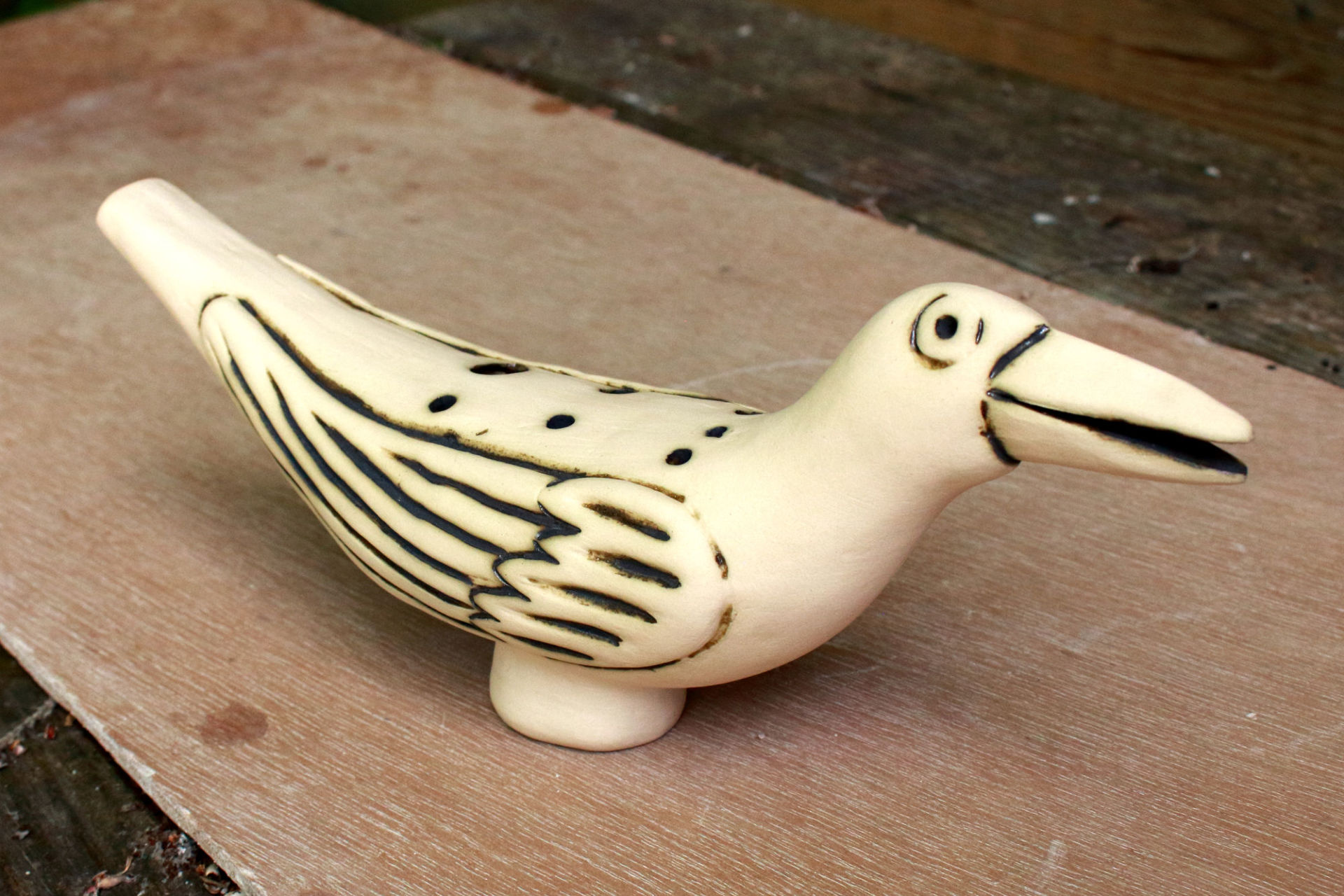 The existence of the right thumb hole isn't itself a problem, but rather the fact that it is conflated with the primary support point. Thus, it is possible to fix this problem by supporting the instrument in a different way. I've thought of quite a number of ways of doing so. The two that I've tried here just happened to be the easiest to implement.

Note that in the examples here, the added support pieces are made in ceramic and attached to the instrument. This was done as it was an easy way of testing the concept, and I do not think it is the best option. Elaborated later.

Resting on the bridge between the finger and thumb 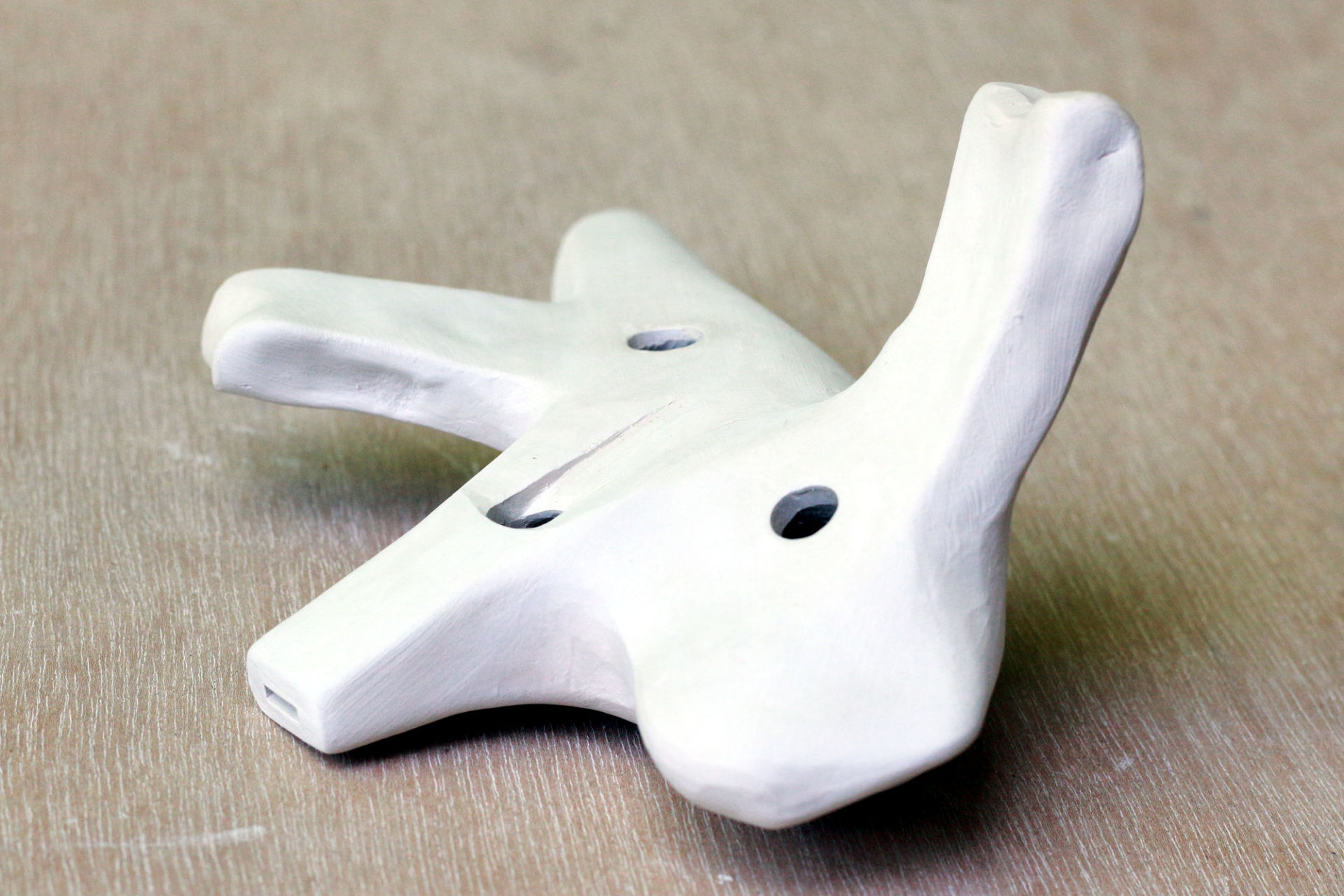 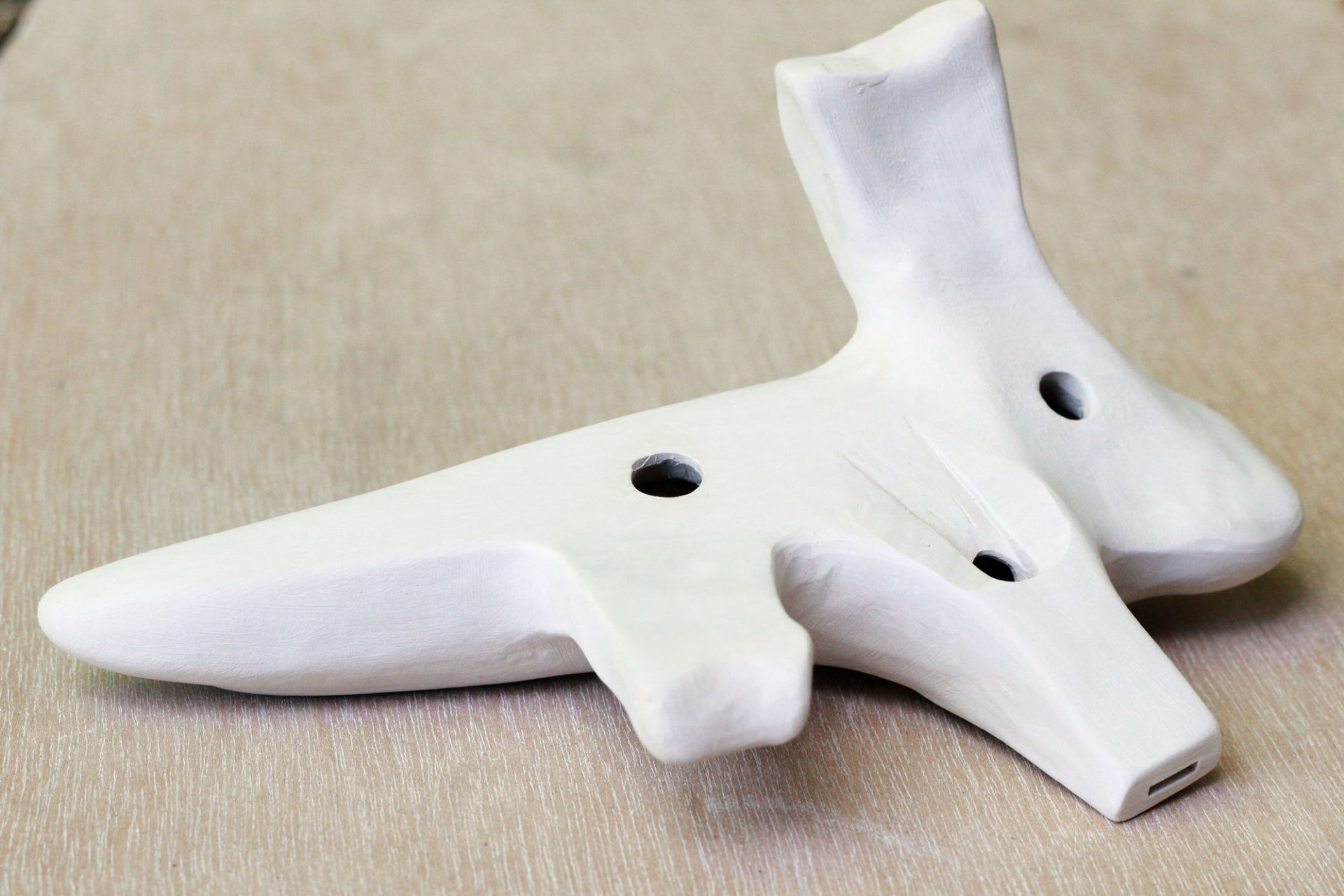 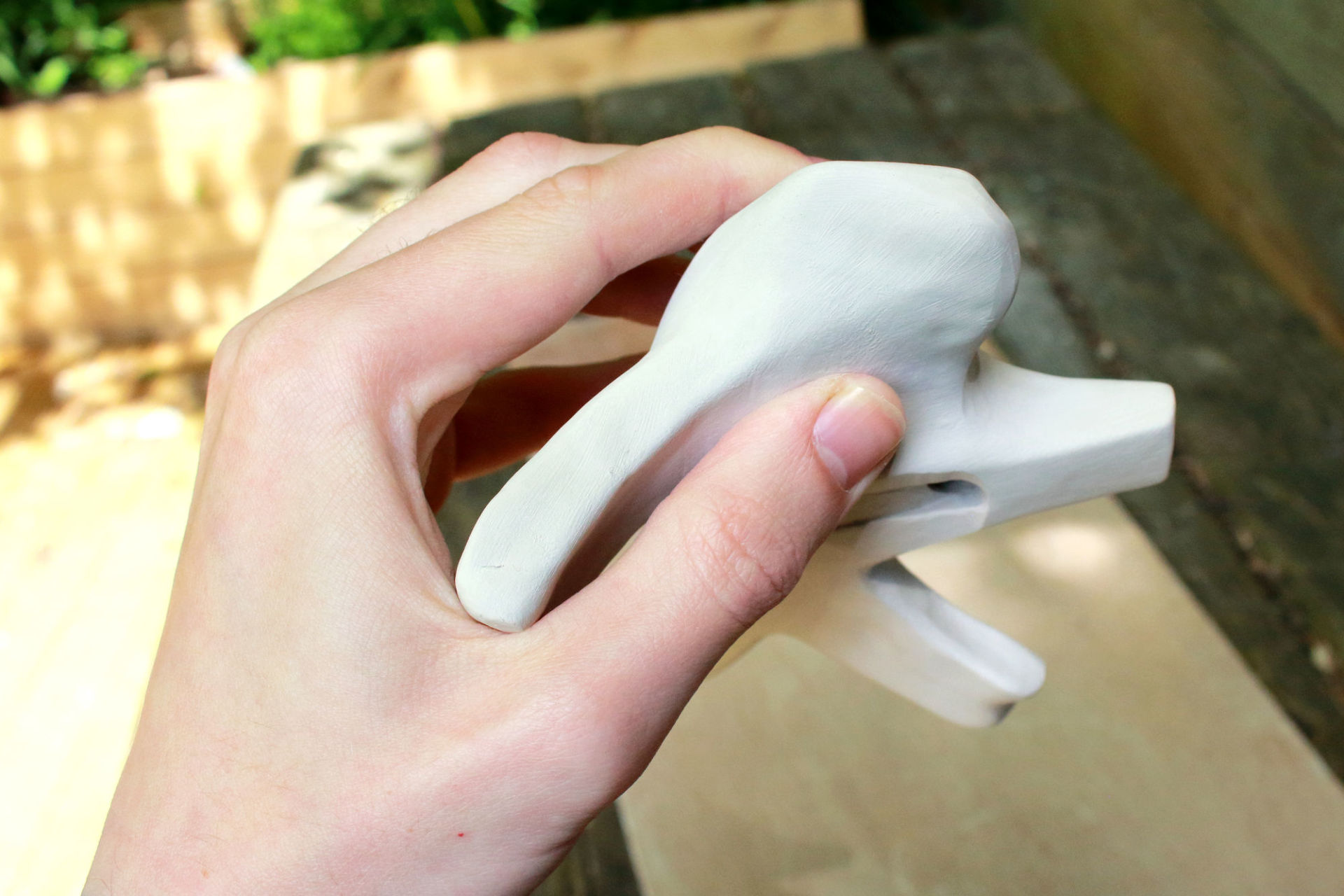 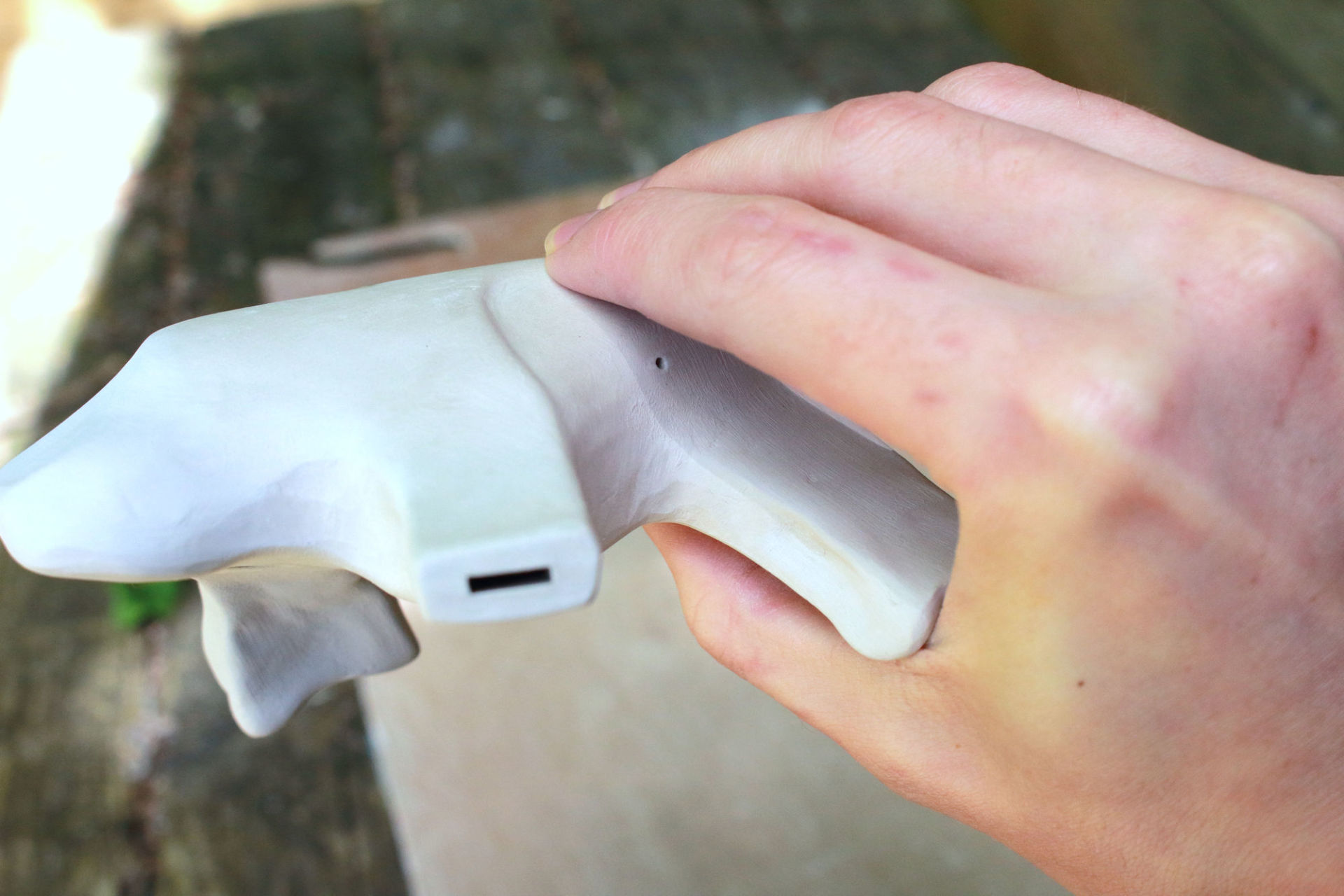 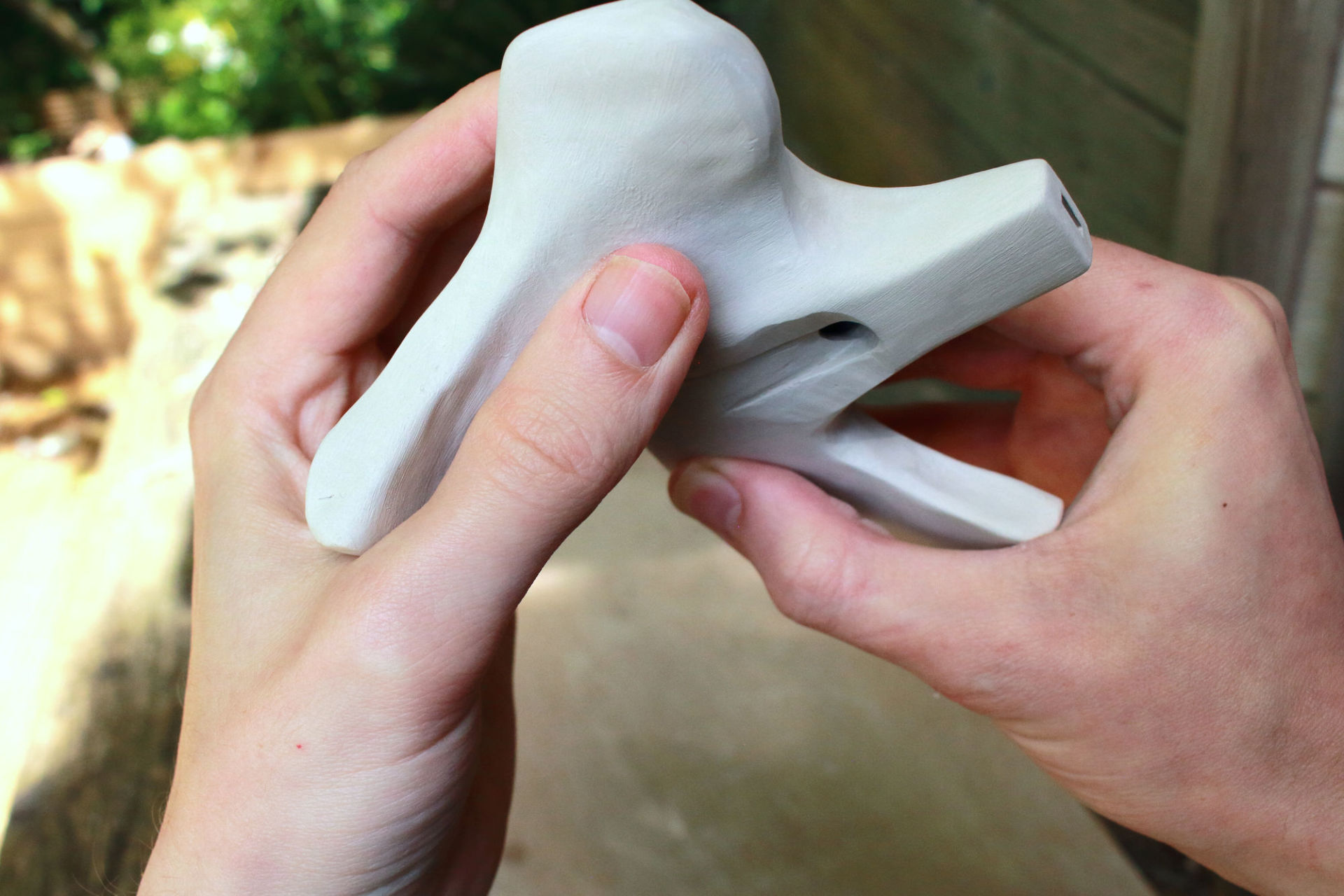 Additional pieces are added whereby the ocarina rests on the bridges between the finger and thumb. It supports the instrument, but the ocarina is relatively unstable, and effectiveness of this is very sensitive to weight distribution. It could possibly be improved by making the supports more 'U' shaped, so they hook over the bridge, instead of only resting on it.

Locking between the bases of the fingers 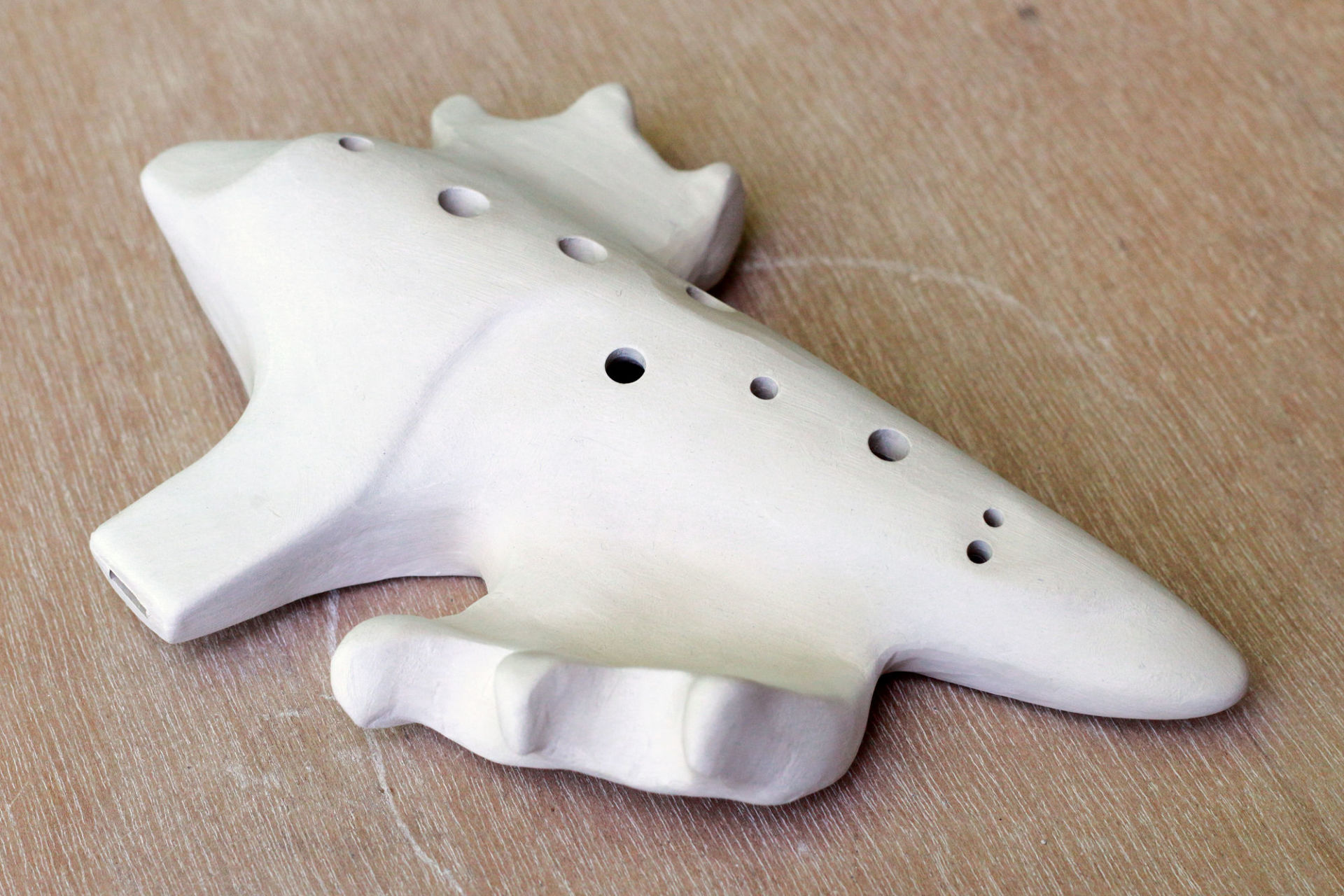 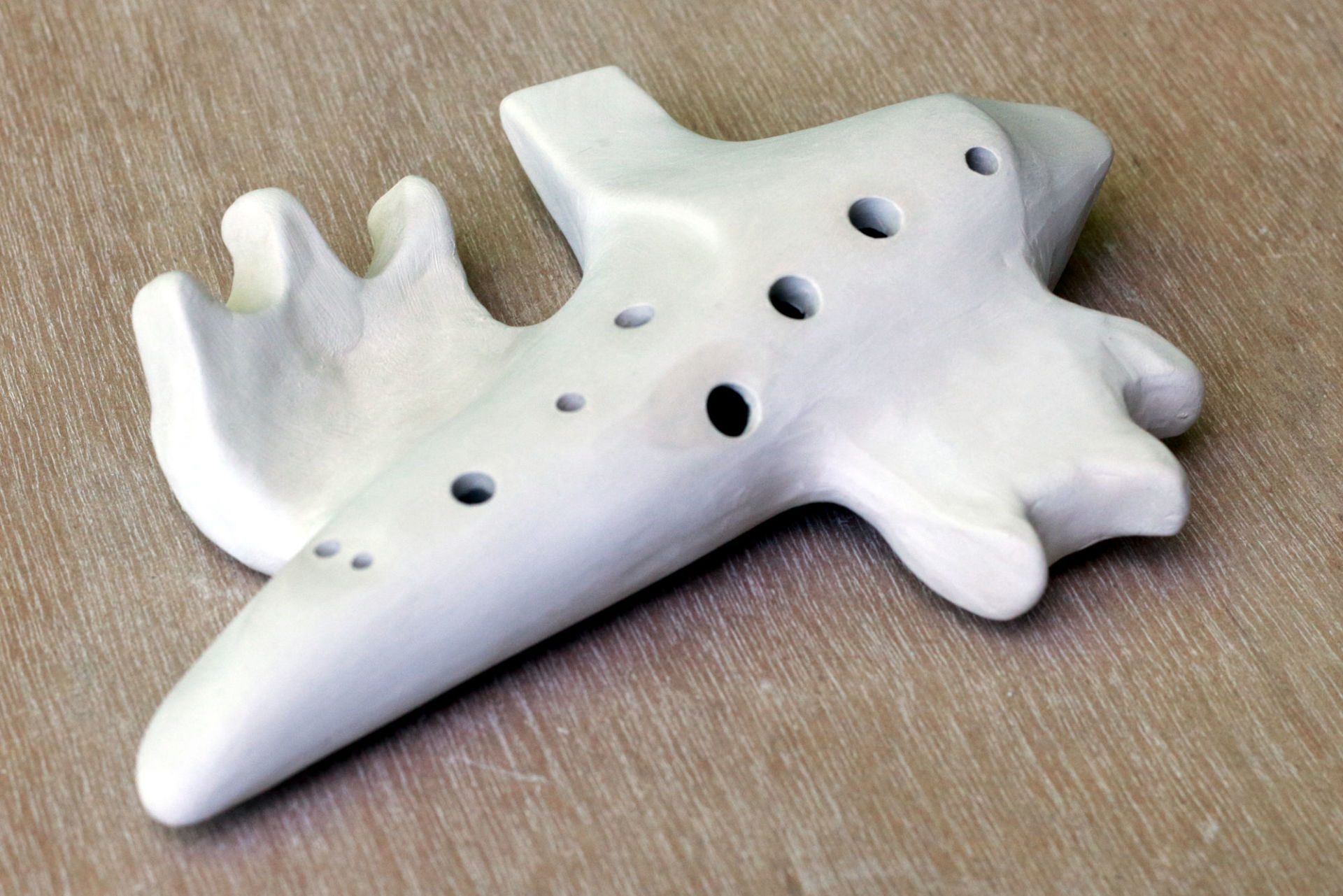 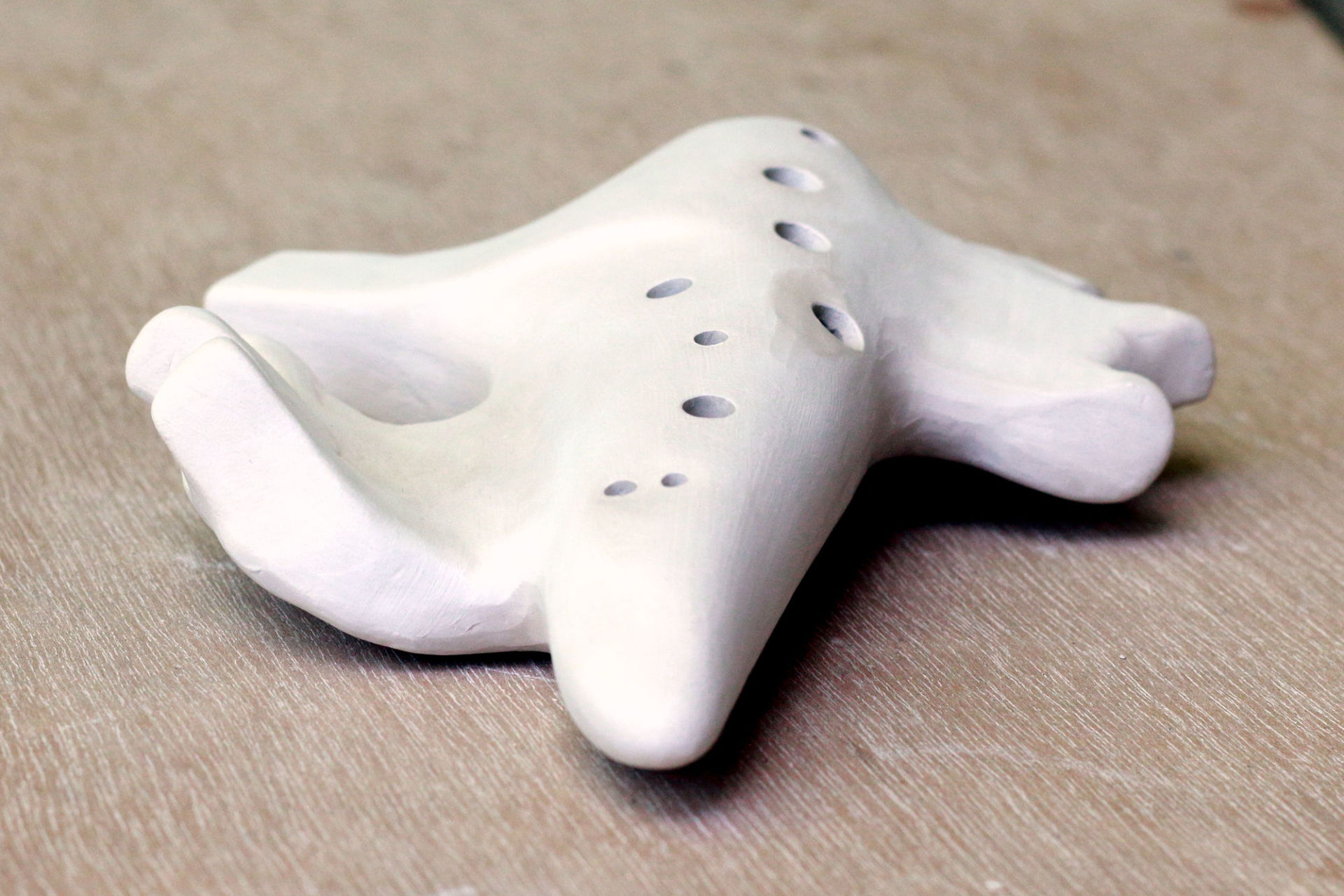 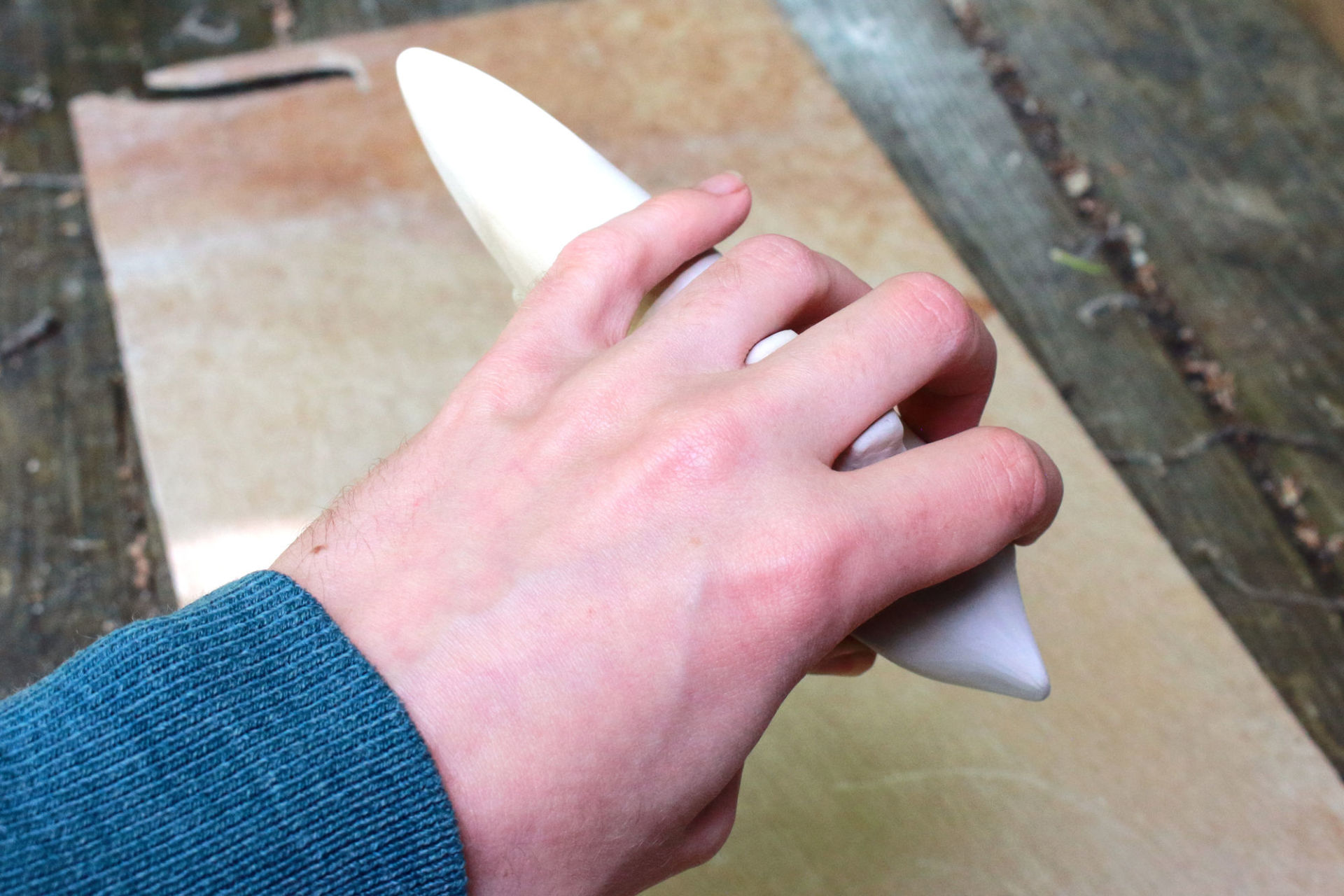 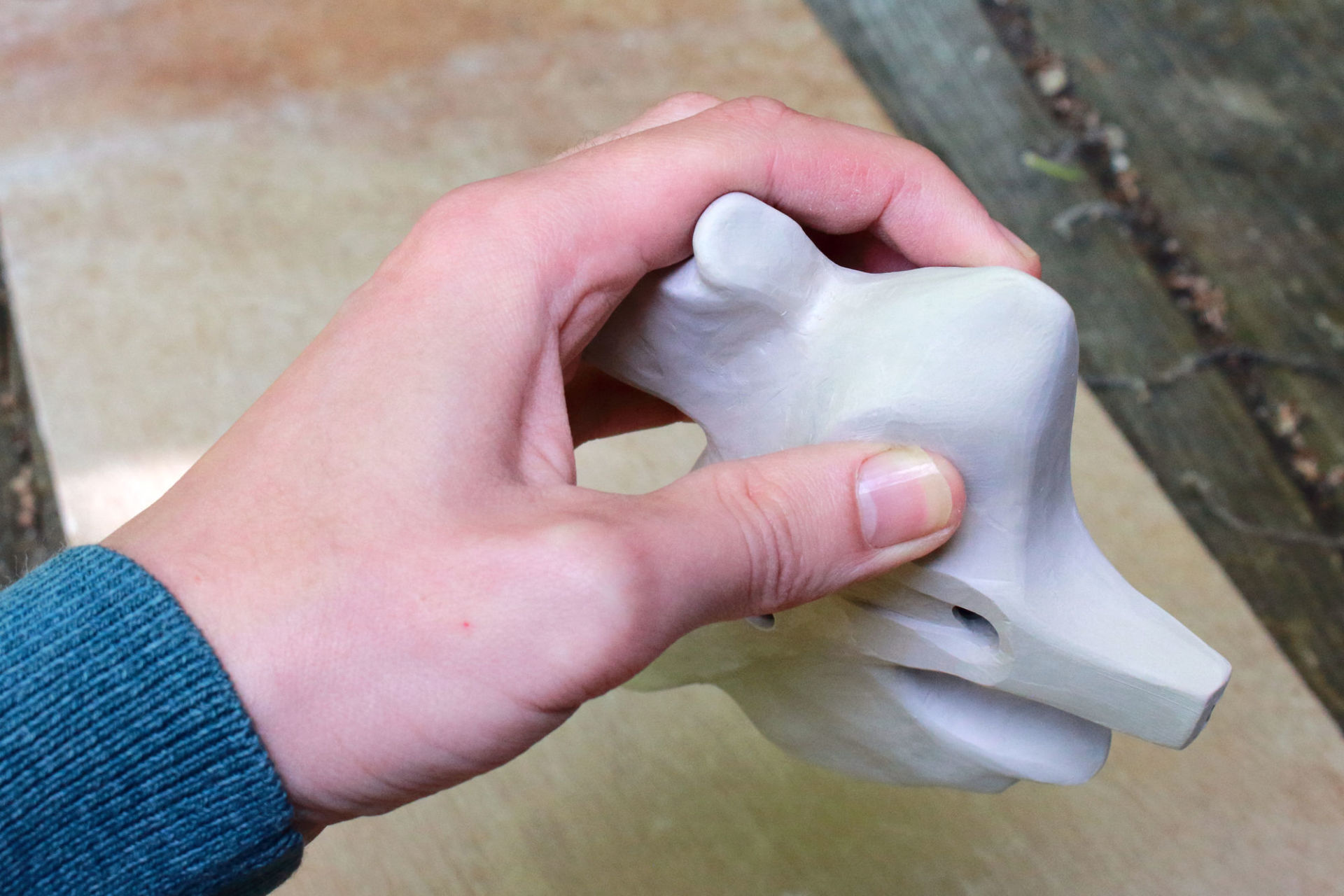 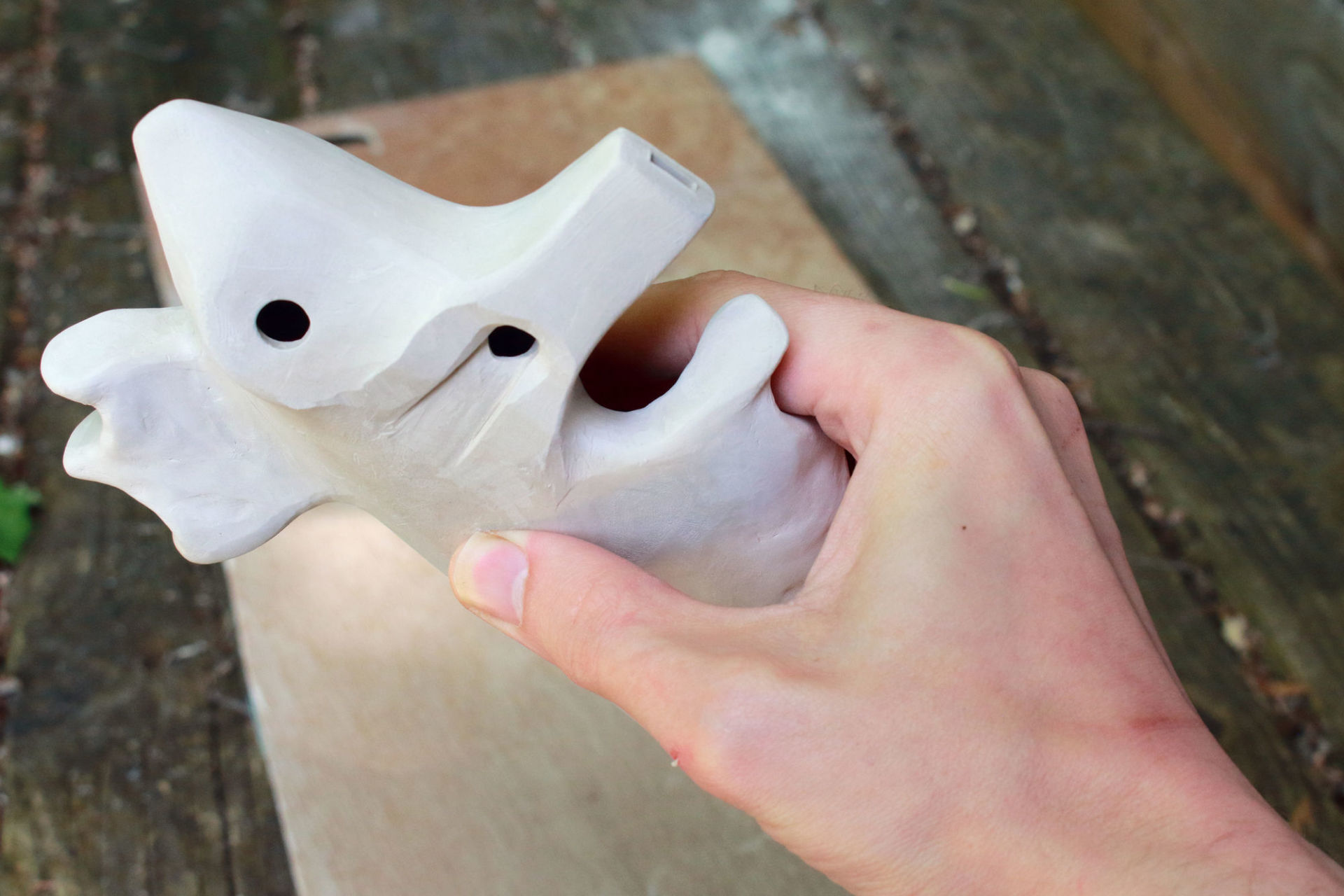 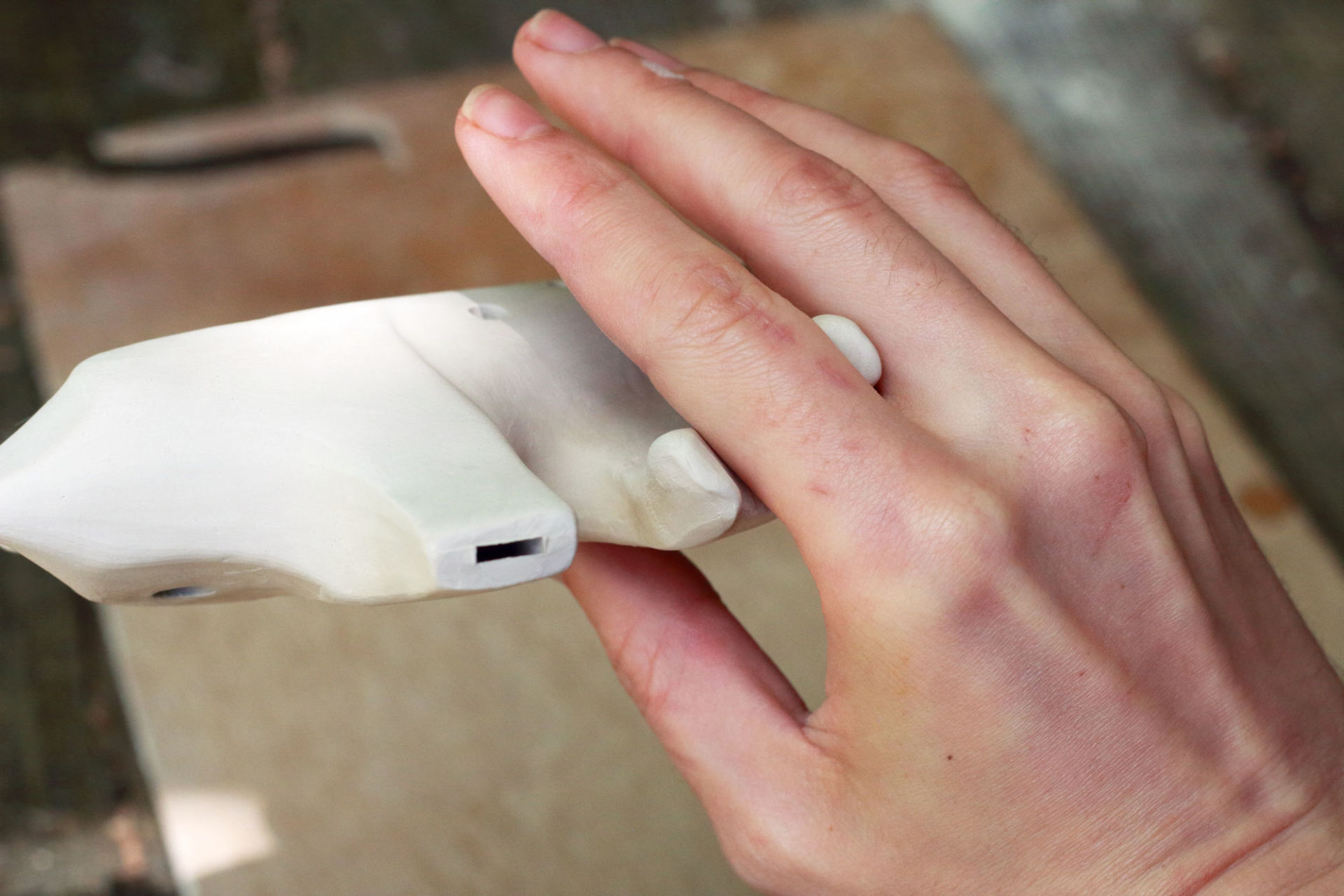 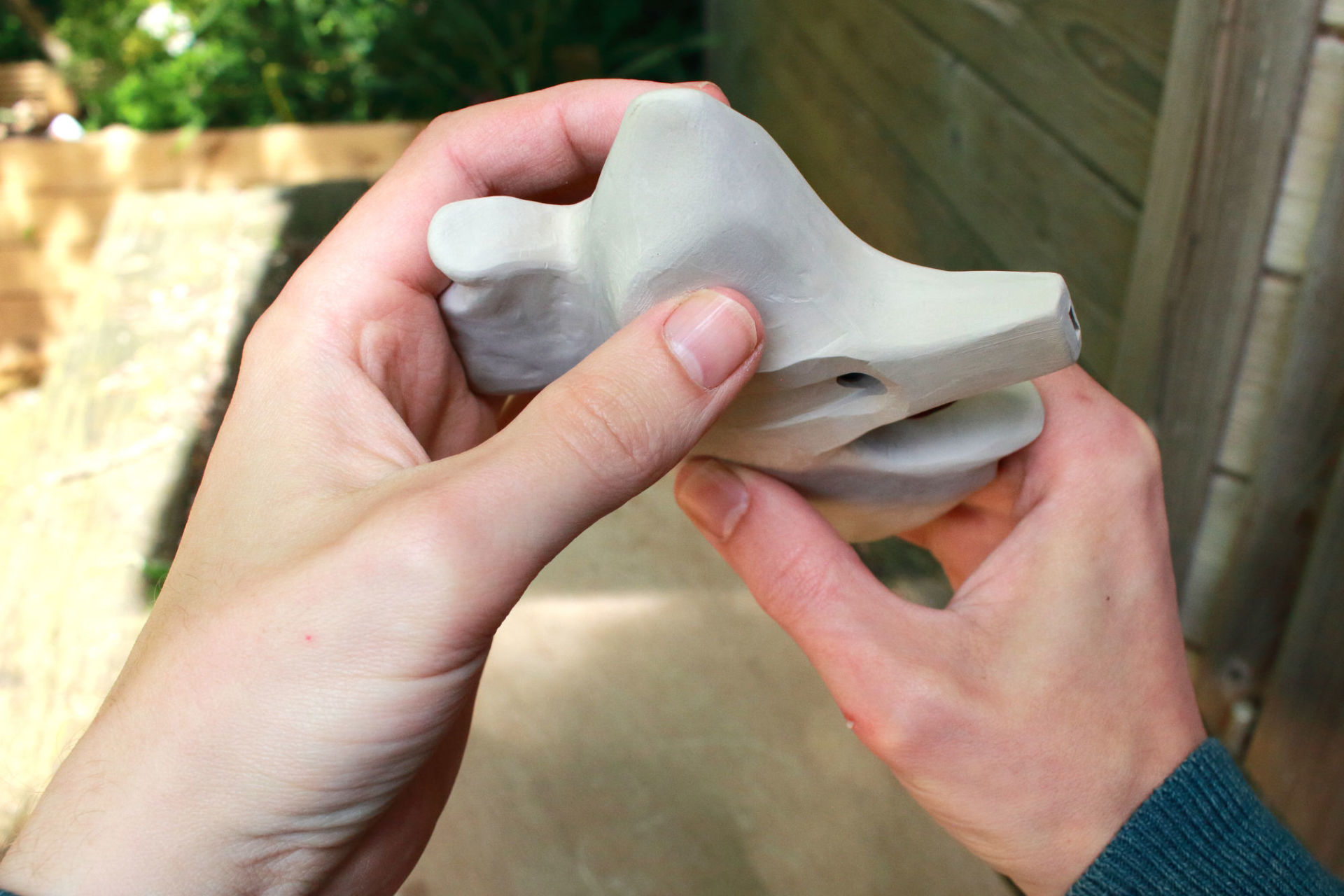 An alternate idea where the ocarina is supported by some pieces which lock between the bases of the fingers. This design is a lot more secure than the one above, and holding the instrument is totally effortless. On a downside, it does impose some restriction on the movement of the fingers.

I have a number of other ideas, which I elaborate on at the end of the page Playing the high notes of single chambered ocarinas. Other possibilities for supporting the ocarina include mounting it to the right wrist, or to a chest plate like a reverse backpack. I've seen something akin to the latter used with contrabass ocarinas. 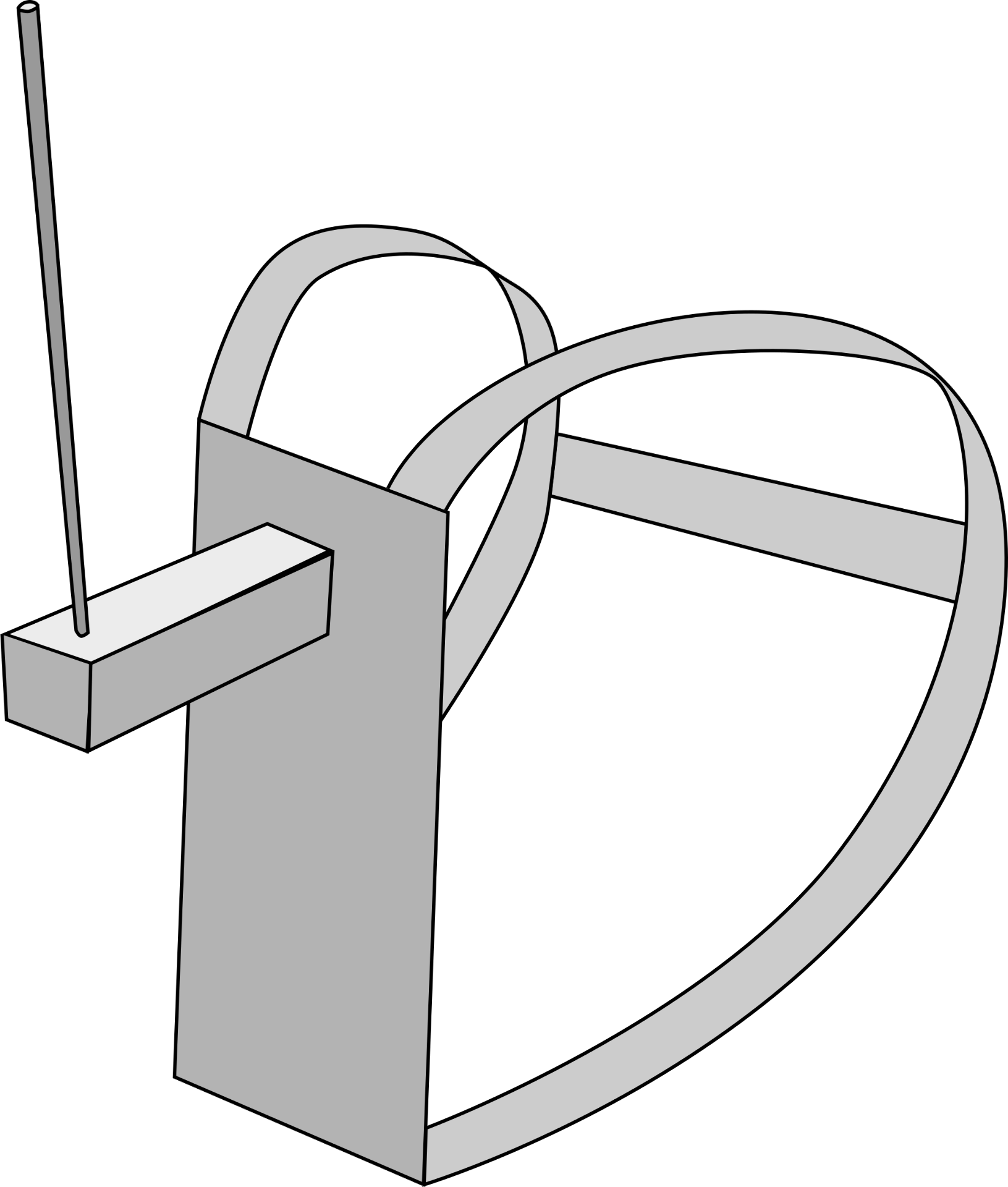 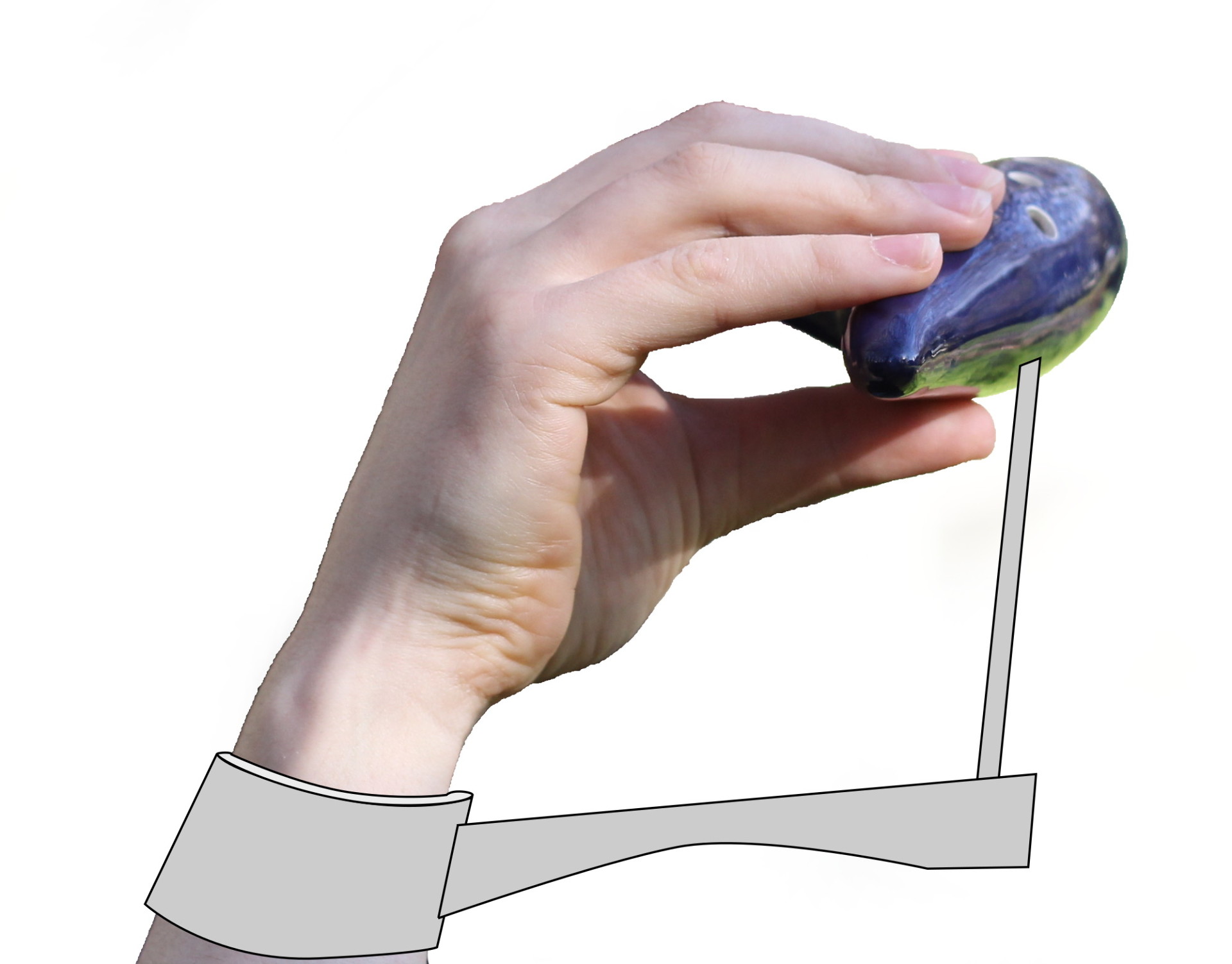 Other options include replacing the function of the right thumb hole with a key, or blowing the instrument through a tube, with it resting on a table. Both of these have problems. Keys don't work well with ocarinas as they are so sensitive to hole shading. The additional mass of the key would also harm response time.

I think playing the instrument using a tube is the worst option as this would also be bad for response time. Once the air in the tube is moving, it wants to keep moving and it is best to control the air as close to the instrument as possible, which is why wind players use their tongue to create articulation.

Multichamber ocarinas also work around this problem because they play higher notes by using more chambers, only one of which is played at a time. Each chamber has its own finger holes and the player moves all fingers of the right hand to the holes of the chamber they are blowing. Due to this, they can eliminate the need for a right thumb hole.

Both of the ideas that I tested are effective, and make the high notes much easier to play. It actually feels very strange not having to support the instrument while playing them.

In terms of implementation, I don't think that having this built into the instrument as I have done is a good idea. In order to work effectively it must be closely matched to the player's hands, and their idiosyncrasies of how they hold the instrument. Rather, It should be a separate piece which clips on around the ocarina, with adjustable pieces to lock onto the hands.

In principle the idea is similar to a guitar strap or violin shoulder rest. Though, as physical shape of ocarina is not standardised, it would have to be provided by every maker. I think this is feasible, considering that 3D printing and scanning are now affordable.

Some amount of adjustability could be designed into this, but making something that actually works for many players would require a deep understanding of ergonomics, and how different people actually hold the instrument. Doing such a study could be very difficult, as ocarina players are geographically disperse.