How to improve the effectiveness of tunable ocarinas

Current tunable ocarinas are based on the idea of inserting a tuning rod into the chamber. By sliding in or out, it occupies part of the chamber volume, changing the pitch.

This design has existed for a long time, with historic examples in the ocarina museum in Budrio. However, it also isn't very effective. In this article I'm going to explain the value of tunable ocarinas for players, and explore some ways of improving them.

To begin, I feel it is worth explaining why a tunable ocarina is even needed, given that an ocarina's pitch can already change a great deal with blowing pressure. Understanding this also demonstrates how to measure the effectiveness of an ocarina tuning mechanism, which isn't so intuitive. 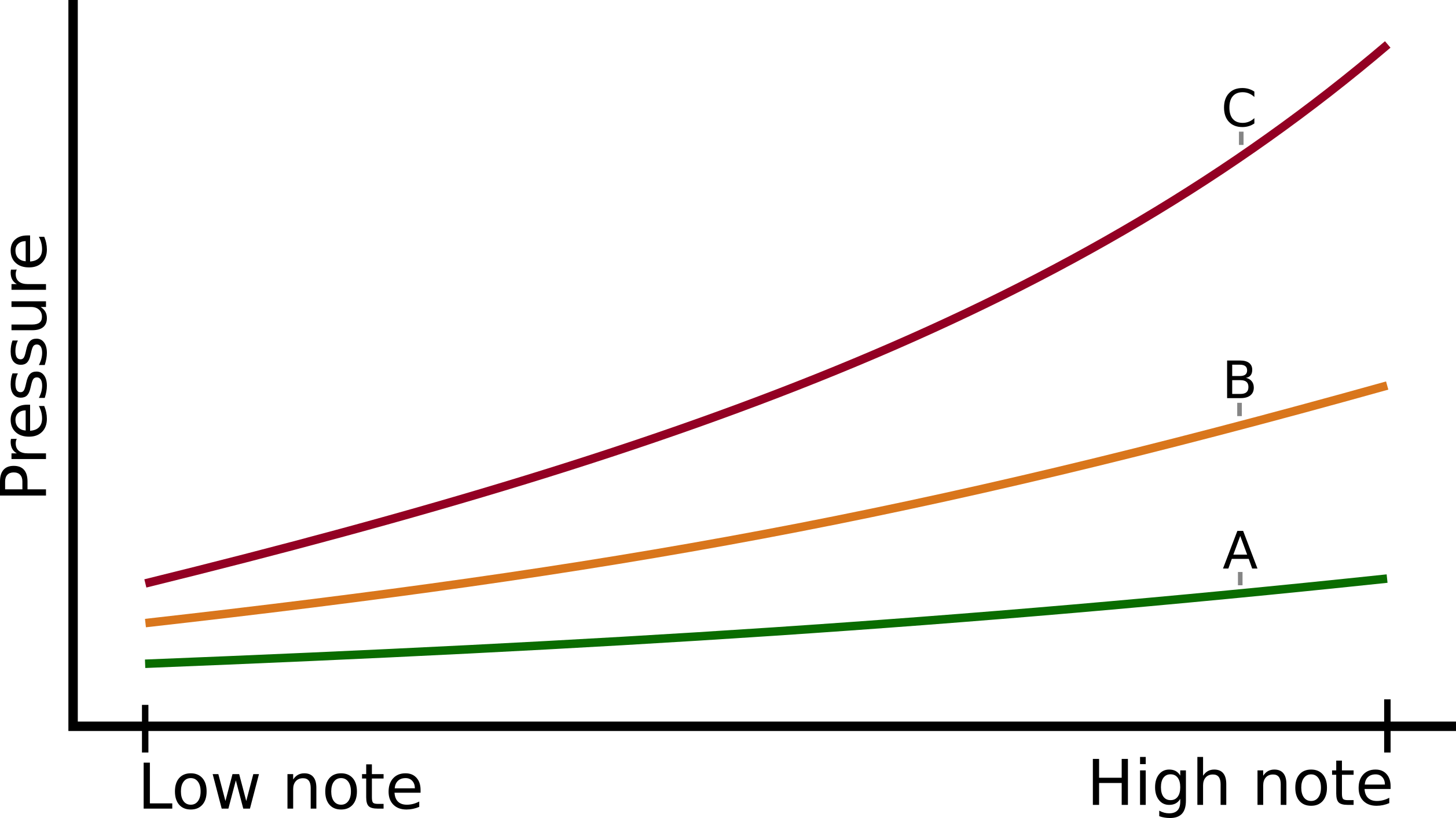 When the needed compensation is small, this isn't a huge issue, but at larger ones it has a number of negative effects:

An effective tunable ocarina would solve all of these problems, allowing the pressure required to sound the high notes to be brought back into an optimal range.

It should also be apparent that it is important to measure the effectiveness of a tuning slide using an ocarina's high notes. The influence of a tuning slide on the low notes can be almost imperceptible as they are already very sensitive to pressure changes.

Why existing tunable ocarinas are not effective

The reason why the existing design used by tunable ocarinas isn't very effective is the diameter of the plunger. Tuning plungers usually occupy a negligible volume in proportion to the total volume of the chamber.

Thus, an obvious way of improving the effectiveness of tunable ocarinas is to just increase the diameter and length of the tuning plunger. To some extent this will work, but:

The problems noted in the previous section arise from the conflict between the normal function of the chamber and the tuning plunger. An obvious way of solving the problem is to separate these concerns by introducing a secondary tuning volume separate to the main chamber:

In order to maximise its effectiveness the 'tuning volume' should be of large diameter. The volume should be a parallel tube, sealed at one end by the tuning plug, like the piston in an engine.

This plug may be moved in/out to change the volume of the sub-volume, adding/removing volume from the master chamber. As it is separate volume and not close to any finger holes the tuning plunger can never shade them. 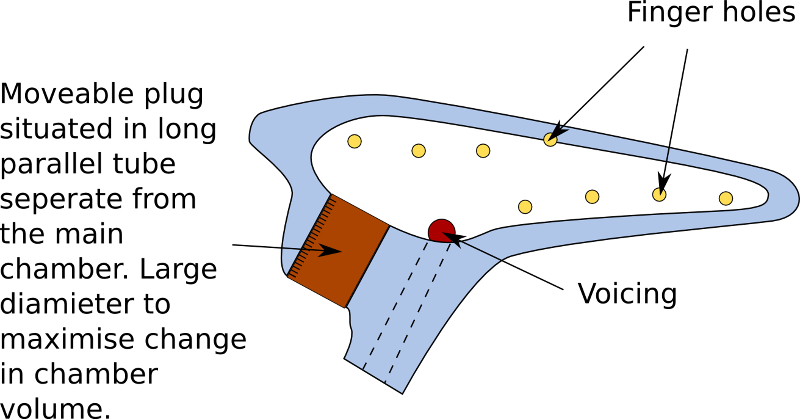 I have tried this idea on my alto D and in principle it works. This first attempt allows the pitch of the highest note to be shifted by approximately 30 cents, with obvious improvements available: 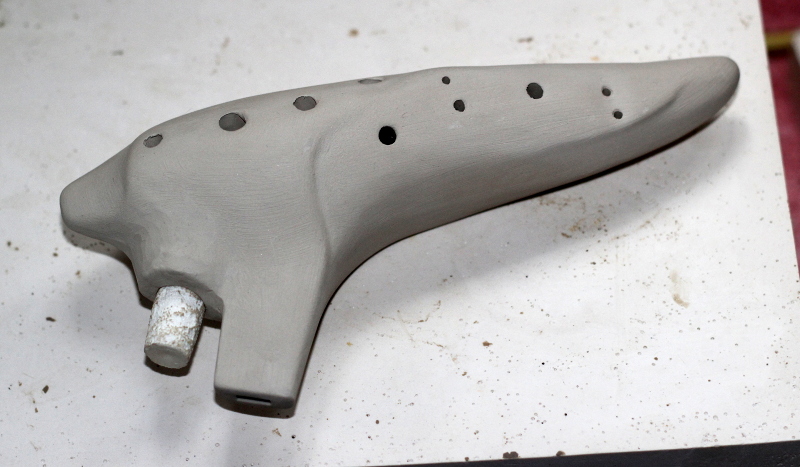 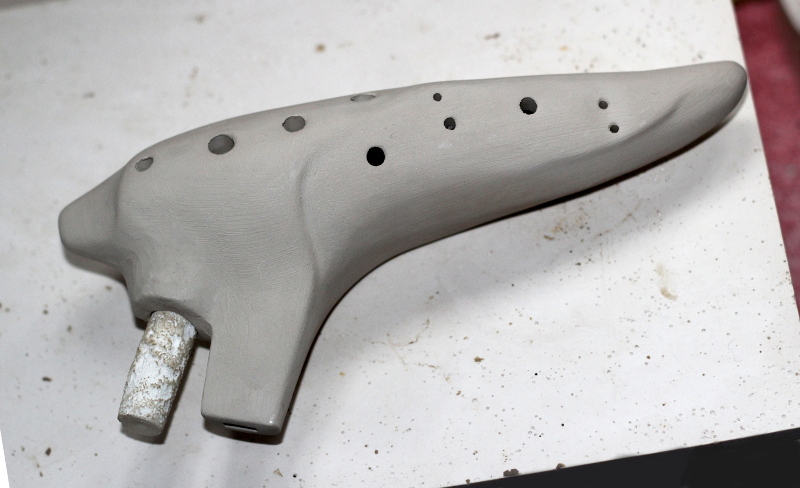 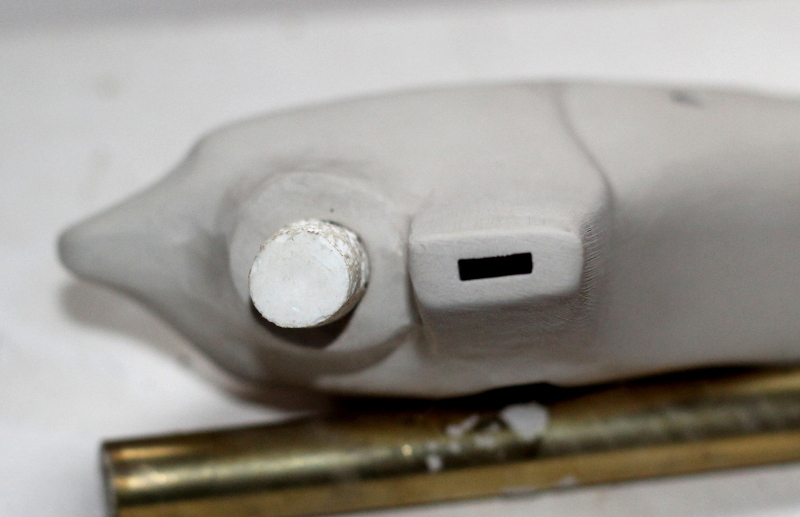 Before finishing, I'd like to note some points about this design. Positioning the tuning volume where I did, besides the mouthpiece, may seem weird. Intuitively, one may think that the tuning plunger would hit the players face, but it does not as the human face is not a flat plain.

This location was chosen due to a number of considerations:

Finally, this idea can be extended to multichambered ocarinas, which I explore in the article A design for a tunable multichamber ocarina