Over the past years, I have had the opportunity to play ocarinas in a very wide range of situations. This has meant dealing with freezing temperatures in the middle of winter, to barely tolerable highs in the summer.

Whenever I have played with other musicians, I've always experienced difficulty playing in tune from the first note. As an ocarina's pitch is sensitive to blowing pressure this is somewhat a given, as the player must get used to the instrument's breath curve. However, I've been playing this ocarina for over a year, and it feels like I've needed to re-learn the breath curve in every new situation.

Due to this, I have come to suspect that ocarinas have a non-linear response to ambient temperature across their playing range. I initially rejected this idea as the general attitude in the ocarina community has been that ambient temperature does not matter, as the instrument is warmed by the players breath. But after embarrassing myself by playing out of tune in front of a large audience, I decided to study the issue scientifically.

To research the underlying behaviour, I came up with two questions that are testable by experiment:

This article describes my results of testing these two questions. The intention was to obtain a 'high level' or 'ballpark' overview and, as such, my methodology and test equipment is not as rigorous as it could be. Throughout the article, I make note of methods which could be improved, as well as results which appear abnormal. To eliminate variation in instrument tuning, all measurements were taken using the same ocarina.

How does the ocarinas pitch respond to changes in pressure?

The pressure needed to sound every note at these offsets was measured using an electronic pressure transducer from a tube alongside the instrument's windway. Because I do not have anything to use as a reference, I have made no effort to calibrate to a standard. Thus, my results are given in arbitrary 'units'. While these cannot be compared with 3rd party measurements, they can be compared with other values from the same measurement device. See 'How I made these measurements' for further details.

In order to avoid introducing errors from varying ambient temperature, the room was heated to a constant temperature of 20C +/- approximately 1 C, and the ocarina was pre-warmed by playing it for several minutes. After this, all measurements were taken quickly over about 15 minutes, leaving little time for the ocarina to cool.

My tuner was first set to A440 minus 40 cents and the pressure measured for each note one after the other. This was repeated for -20, 0, and +20 cents. Every time the tuner was adjusted, the instrument was re-warmed by blowing 5 full breath long tones immediately before making measurements for that tuner setting. The ambient air temperature was 15 degrees centigrade.

Following are the results of this experiment: 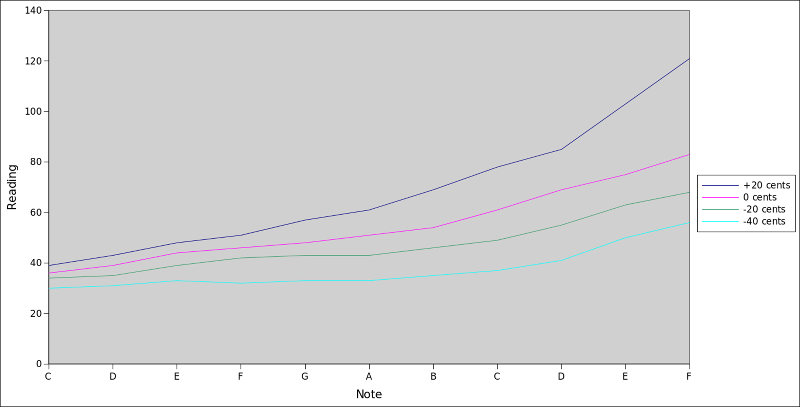 The results at the low end appear to contradict, -40 to 20 changing by 4, -20 to 0 changing by 2 and 0 to 20 changing 3. Based on the shape of the other 3 curves, the -20 cent curve between low C and G appears to be reading high. I would expect it to lie closer to the middle between the minus 40 and zero curves.

I believe this is a quantisation error caused by the limited resolution of my measurement set-up. It is also probable that I contributed to the error. The ocarina is very sensitive to changes in pressure on these low notes, and holding it stable is not easy. The first could be addressed with a more sensitive measurement device, and the second by taking multiple measurements and making an average. However this does increase the chance of error from environmental temperature change, as it would take longer to take more measurements.

Another abnormality I observed is the sharp angles present in the plus 20 cent curve which do not correlate with any of the other curves. I do not know what caused this, and repeating the measurements would be required to determine if they are a one-off error or not.

How does ambient air temperature affect an ocarinas tuning?

To test how ambient air temperature affects the tuning of an ocarina, I have measured the pitch of an ocarina's high F at different temperatures. The high F was used as a reference as this note is the least affected by changes in breath pressure

The ambient temperature of my workshop can swing greatly depending on the temperature outside. I took a measurement playing the high F, at different times of day, adjusting my breath pressure until the note sounded best to my ear. Then I took note of how many cents it differed from F at A440. This was recorded along with the ambient air temperature.

Breath warming was minimised by leaving the ocarina for several hours before taking each measurement, and then taking the measurement during the first breath. A number of measurements were taken over several days.

Results; all temperatures are in degrees Celsius. When graphed, this appears to be a linear plot. I have added a line of best fit: 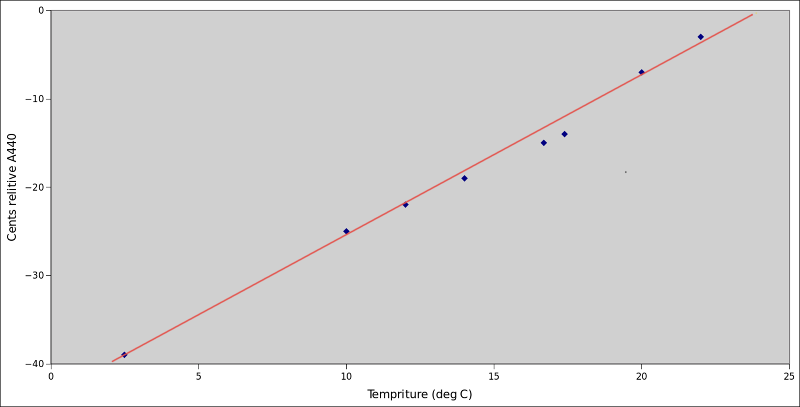 Without the effect of breath warming, the pitch of the ocarina appears to shift linearly at a rate approximately 9 cents per 10 degrees. There is some variation in the plotted points, which I assume is due to variation in what I was perceiving as 'best sound' at a given time, and probably also humidity varying, which I did not measure.

The sounding pitch of an ocarina is affected by ambient air temperature. While this can be compensated for by changing breath pressure, the ocarina responds non-linearly to these changes across its sounding range.

This non-linearity is likely responsible for the pitch errors I have been experiencing. It makes it difficult to learn an ocarina's breath curve as the curve required to play in concert pitch changes with ambient temperature. Dealing with a non-linear breath curve shift as a player is problematic. This is analogous to having a string instrument whose frets move with temperature. The player needs to learn the set of different breath curves for an ocarina, across a range of temperatures.

At the beginning of this article, I mentioned that the general feeling that ambient temperature does not matter as the player's breath warms the instrument. While I have not attempted to measure this yet, logically it is a misguided assumption as an ocarina's voicing mixes the player's breath with the internal air, and they will reach some equilibrium over time. Thus the breath curve is going to vary with ambient temperature.

In light of this, I'd recommend blowing the ocarina to stabilise its temperature before a performance if possible to avoid sudden changes in the breath curve. I'd advise against pushing an ocarina's pitch too far with blowing pressure, as this has a negative impact on tone quality, and can cause the the high notes to squeal. If possible, it's better to re-tune your accompaniment or get an ocarina tuned at a different temperature, if you need to play in a very hot or cold environment.

I think that makers should always specify the temperature an ocarina was tuned to play best at. If someone plays an ocarina in concert pitch in a cold environment and the high notes squeak as a result, they may assume they have a badly made instrument.

How were these measurements made?

The pressures involved with blown wind instruments are low, so low that common pressure gauges are useless for measuring them. A simple way of measuring low pressures is with water in a U-tube; the difference between the water level in the two tubes is proportional to the pressure applied. This is commonly given as inches of water or centimetres of water.

My first attempt used this approach, but I found it too cumbersome as the water takes several seconds to stop moving after pressure is applied. As noted above, all commonly available 'dial' and digital pressure gauges are designed for measuring pressures considerably higher than the range I'm interested in. Using a U-tube, the highest pressure I've ever observed was 19 centimetres of water, about 0.27 PSI.

I discovered that pressure transducers do exist for such low pressure ranges. These are electronic components which linearly convert pressure into a voltage. I created a gauge using one of these and an Arduino microcontroller to sample its analogue output, the values from which were streamed to a Linux computer via USB serial.

The values obtained from this are simply the direct output of the Arduino's ADC, minus a zeroing offset as the transducer outputs a voltage higher than zero volts when no pressure is applied. I have made absolutely no attempt to calibrate these units to a universal standard as I do not have a reference standard with to do so. However, measurements taken may be compared with others made from the same device.

Since buying this transducer, I have become aware of others which are designed to work with lower pressures. Using one of these would increase the resolution in the low pressures being measured. As is always the case, when you do something for the first time, you inevitably find better ways of doing it.