It is commonly thought that the shape of an ocarina does not matter acoustically as the entire volume is always in oscillation. I have come to question this assumption due to the ease of attaining clear high notes in soprano ocarinas, while lower tunings struggle to do so. I believe this is at least partially caused by chamber shape.

I've long known that the size of a finger hole can never exceed the internal diameter of the chamber. If a hole is larger than the chamber, the chamber itself becomes the limiting factor and the pitch cannot rise. This phenomenon is inherent in designing transverse soprano ocarinas.

In order to attain the high pitch a small chamber volume is required. However in order to keep the instrument playable by people with larger hands the finger holes must be positioned far apart. The combination of these two factors forces the use of a high aspect ratio chamber, a chamber with a small internal diameter with respect to its length.

I believe that this is, at least in part, responsible for the ease of attaining clear high notes in soprano ocarinas. To attain their pitch the size of many finger holes, particularly the thumb holes, must be close to the internal diameter of the chamber itself. When this happens, the air oscillating in the chamber seems to enter/exit via the hole, effectively bypassing the air in the section of chamber downstream of the hole.

This seems to dynamically reduce the effective volume of air oscillating in the chamber as higher notes are played. As is the case when the chamber volume is reduced by making a smaller ocarina, reducing the mass of air in oscillation reduces the energy required to drive it, resulting in a cleaner tone.

This effect may be easily employed in higher keyed ocarinas, however as the chamber volume increases the chamber must become increasingly bulbous. Bass ocarinas must be designed to keep their finger holes close so they may be played by people with smaller hands. Attaining the needed volume for a bass ocarina with a high aspect ratio chamber would require the finger holes to be spaced very wide apart and the length of the chamber would be unwieldy.

However, it is passable to attain the same effect with a manageable chamber design by having multiple 'sub volumes' attached to a main chamber. Each sub volume having a hole at its base which bypasses the sub volume when opened. 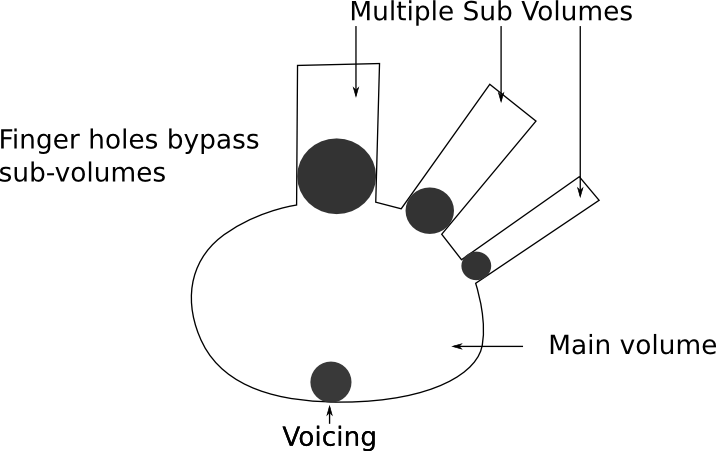 Such a geometry can be folded within the volume of a typically shaped transverse ocarina chamber, meaning that the external appearance could be much the same as existing bass ocarinas. I have tested this in a primitive form using the two thumb holes of a bass ocarina, enclosing them within a 'trunk' only open at one end, as shown in the following diagram.

I can see this being used to extend the sounding range of a single chambered ocarina beyond the typical octave and a forth, without compromising tone clarity. That would involve adding an additional large volume, bypassed by a large hole operated by a key. The idea may be more effective in this situation as a larger hole could allow a greater volume to be bypassed, although I have not had time to try it myself.

I had expected that a chamber with sub volumes may have non-fundamental modes of resonance, which could bring out unpleasant tones, or cause some scale notes to have mismatched timbre. However from the experiments I have made, it does not seem to be an issue. More testing is needed.