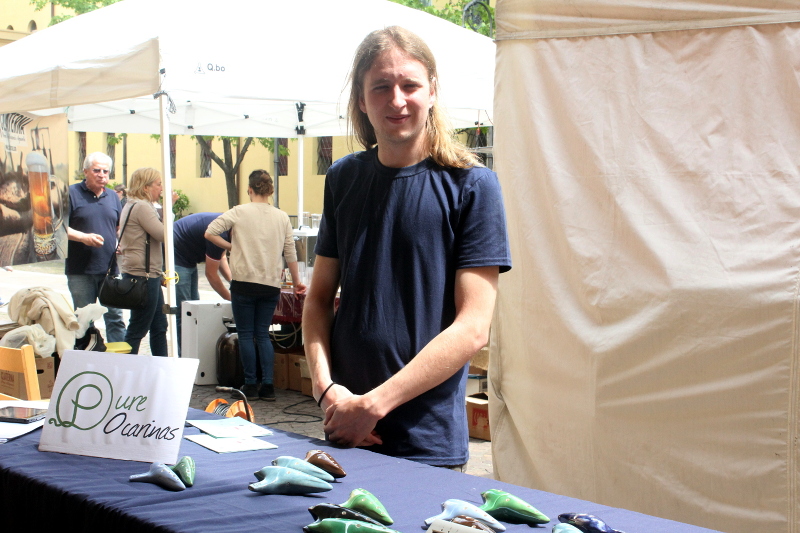 My trip to Budrio ocarina festival in 2015 gave me so many ideas that I have been working on my ocarinas constantly, and neglected to write about my second trip to the festival and Budrio, the birthplace of the modern ocarina. So let’s update on the interim, better late than never right?

The festival was a truly enjoyable experience and gave my enthusiasm a much needed kick. Being the only player/maker in my local area things tend to become very dry. There is nothing like being able to meet with others who are equally passionate about the ocarina in person. The ocarina community is wonderful.

It was awesome meeting old friends again, and meeting people in person who I've only known online.

Normally, I wouldn't write about my journey to the festival as it's usually pretty mundane, but this time was different. To begin, I bought a drink in Cardiff airport, and the lady serving me asked where I was going, it was pretty early, and I was the only person there.

After arriving in Budrio, I was amused by the process of checking into my hotel, which was slightly complicated by my inability to speak Italian. As far as I remember, the receptionist miss-herd my name and could not find my booking, but after a minor panic, the issue was resolved by Google translate.

Then immediately following this, I started playing some tunes in my room to pass the time. A few minutes later Gabriele, a young Italian, knocked on my door. We started talking. He asked some questions about playing technique.

After talking for some time we went to the pizzeria to eat, where we met Ruth Haga and Hans Rotter, who I had met at the festival in 2013. 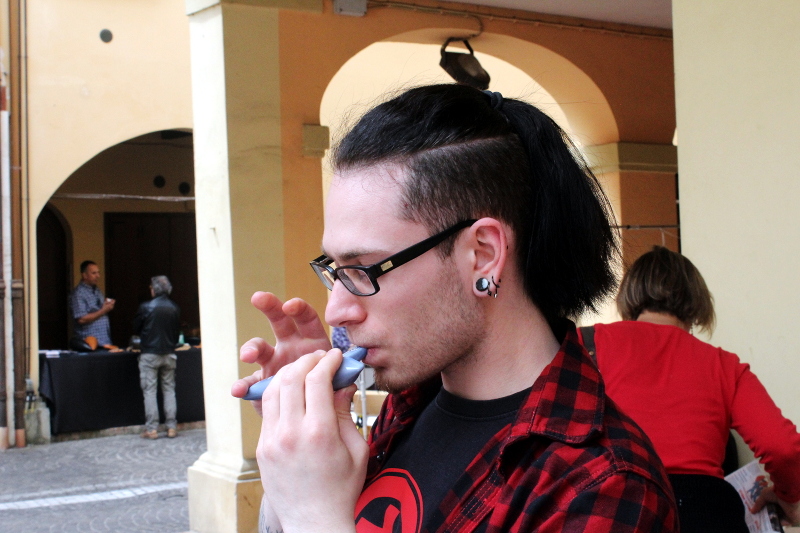 The following day I ran into David Ramos on the stairs in the hotel, whose playing I had originally discovered on YouTube, and who had inspired me to start playing the ocarina. Later he tried my ocarinas for the first time in the market, and he was impressed. 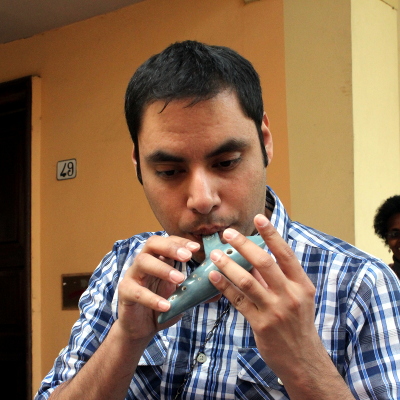 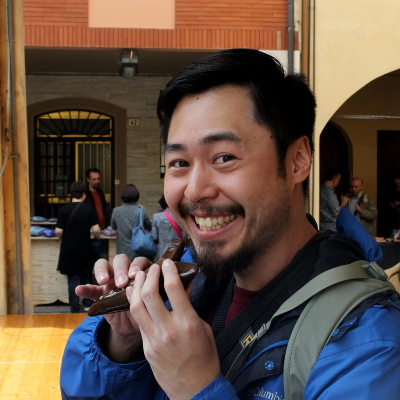 The market was much bigger than at the 2013 festival, with about twice as many makers in attendance. With it's increased size it had moved from the main square to line several of the surrounding side streets. For me, it was a nice change as the space meant makers weren’t fighting for a spot, and buyers had more space to try instruments.

I received a lot of interest in my work at the market and sold most of what I had taken with me. Particularly, a lot of people liked the soprano G.

David/Songbird were travelling around sharing tables with others which worked out very well for all parties. We shared a table on the second day. A crowd usually gathered to talk to David because he is a well known player. Often there was a jam session going with others joining his playing, and consequently people would pick up my ocarinas in order to join in.

I think this is a great idea, pairing a well known player or maker with a less known one as there is mutual benefit. They were able to attract attention to themselves and also the makers they were sharing with.

A negative that I did notice is that the environment of the festival, with lots of folks talking and playing in the background, it is not a great place for judging the subtler aspects of an ocarinas tone.

For instance Oliver Gosselink's work has a nice textured sound due to its rectangular enclosed voicing however this was not as noticeable to me in the noise of the festival. All ocarinas sounded much the same and the preference in players seemed to go towards louder ones.

However I do feel that this variance in volume, timbre and other characteristics

highlights the need to have a multitude of makers in the market as ocarinas are versatile, but their playing characteristics are determined by the maker to a much greater degree than any other instrument I am aware of.

When I first started I did not appreciate the complexity involved, seeing all ocarinas as being the same. Yet over 3 and a half years later, I am still picking up bits and pieces and discovering new things, which only adds to the fun of making them. the problem with the term 'Ocarina' being highly generalised, as it means many different things to people.

I got a few ocarinas from the festival, I'd had my eye on one of Gosselink's alto G's for much of the festival. I went to buy it on the last day and much to my surprise he gave it to me free of charge. I like Gosselink's work as it has such a distinctive timbre and strong striking colours in the glazes.

I bought a turtle whistle from a French whistle maker who had recognised one of the French folk tunes I had been playing, Les Poules Huppees.

I enjoyed the concerts from the festival, especially the main concert, which I think was at a higher standard than the previous year. The performance I remember most involved glissandos (pitch-slides) synchronised perfectly across multiple players.

The 3rd day of the festival was slower, the main area was packed and I ended up down a side street with two pendant makers. one of whom was a somewhat eccentric travelling Yoga teacher. Overall I didn't really mind the slow day as the previous day had been intense, and they were interesting to talk to.

Another thing, I talked to the maker of spirit Wind Ocarinas, and he mentioned that there is a tendency to get used to a certain breath requirement, raise it, and then make another ocarina with an even higher breath requirement. This is something I have noticed myself in my earlier work.

I always come away from the festival having picked up something. The first time i went in 2013 totally changed the way I see the ocarina. This second time was less of a shock, but still gave me some ideas, and the inspiration to continue making ocarinas.