While sheet music can look complicated at first sight, it's easier than you think. Sheet music is pattern-based, and you can learn enough to begin reading melodies in just a few minutes.

I will only be explaining the basics here as there is a considerable amount of articles, videos, teaching software, mobile apps and other resources about how to read sheet music and a simple search 'reading sheet music' will give you a lot of results.

In the beginning you don't need to be able to sight read fluently to make use of sheet music. Due to the massive volume of music available in the format there is a good chance you can find what you want to play. Consequently there is a lot of value in simply being able to 'decode' the letters of the notes. Even doing this you're still practicing the notes on the staff. After you do so for a while you begin to know a notes letter at sight.

But from this alone, you may find that it is unclear which note represents which pitch. So then you may add some lines, and assign each line to a different note:

This is essentially how sheet music works. Different vertical positions represent different notes on your instrument. Both the lines and the spaces between them are also used, as it makes the notation more compact.

Now, you may have a mental image of a 'note' from common culture, something like one of the following:

These symbols are often used culturally to visually represent the concept of music. The above simple circle may be confusing.

What is going on here is that notes have multiple parts:

Here are a selection of different notes:

As you can see all notes have a head, but they don't all have a stem.

Despite having different shapes, all of the following represent the same note:

Sheet music represents notes using the staff, a set of 5 lines and 4 spaces. The lines are numbered from bottom to top, line 1 at the bottom and 5 at the top.

Notes are defined relative to a root note, and this root note is itself defined the clef, a symbol placed at the beginning of every line of music. As a player of a melody instrument you will be using the treble clef (left). You will have seen this symbol before as it is frequently used as an ideogram for music.

The treble clef states that the note G may be found on the second line of the staff. For clarity I have highlighted it in red:

OK, so circling the second line tells you to play a G, but there must be more to it. After all music would be pretty boring if there was only one note. The other notes are defined relative to this point. If a note circles the space below the G line you take one step down the scale. The music now tells you to play an F.

To place C you must imagine that the staff has extra invisible lines with the same spacing. C lives on the first of these. To hint the lines existence a short strike is placed behind it, which is called a ledger line.

From G the same pattern may be continued upwards to F, the highest note playable on an alto C ocarina:

You can practice reading notes using this tool, which randomly generates note positions:

To read rhythms, I recommend:

Rhythms in sheet music are notated as subdivisions of time. For example, a note with this shape:

Has a duration which is twice as long as a note with this shape:

Starting from the top of the diagram, a simple circle is called a 'whole note'. A circle with a stick is called a 'half note', and has a duration of half of a whole note. Continuing downwards, you have the quarter note, eighth note, and sixteenth note, each having a duration half that of the layer above. 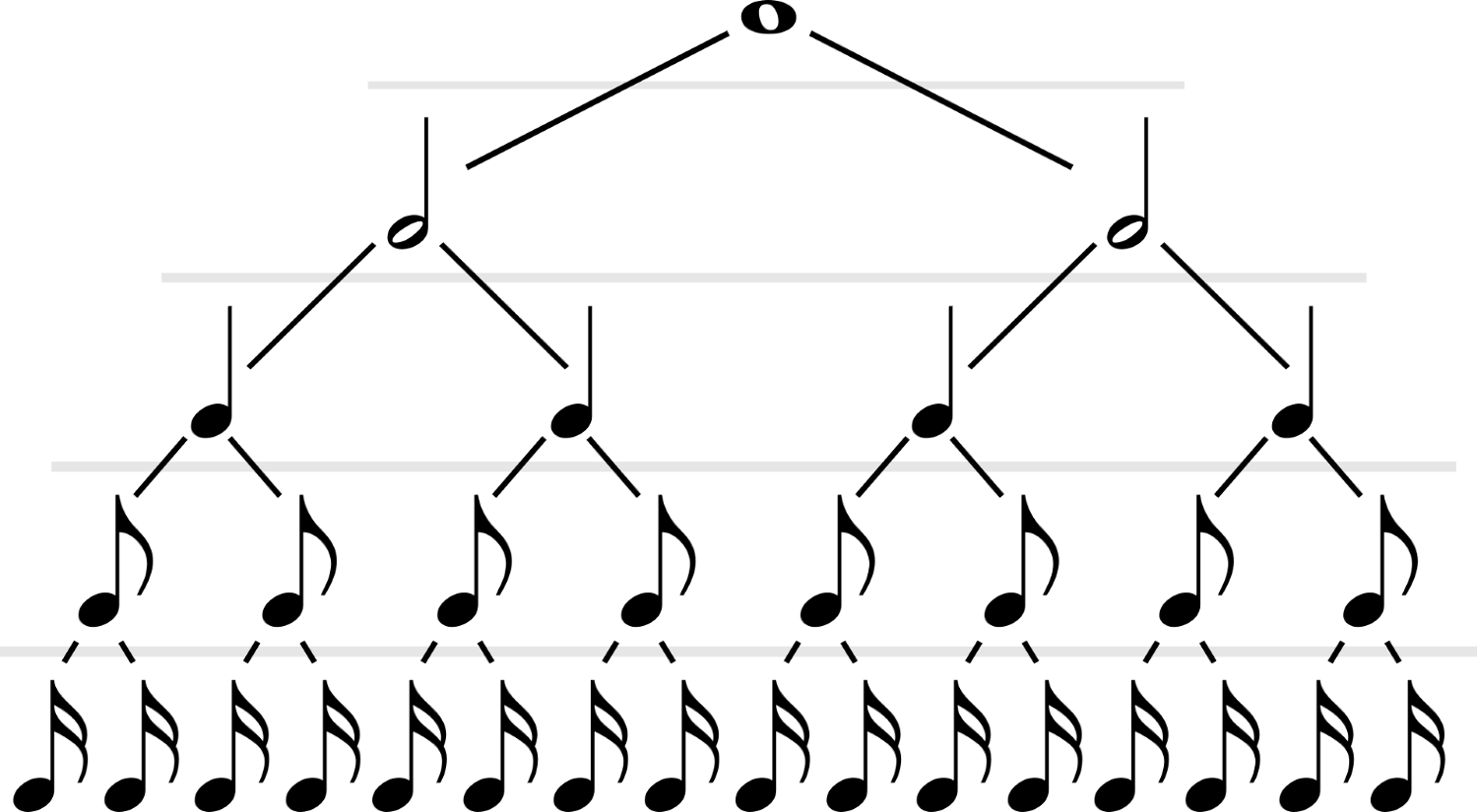 Note that I am using the American names for note durations, as they have a direct connection to common language. Things are easier to learn when they are connected to things that you already know.

Sheet music groups notes into bars, which are just vertical lines in the staff. Bars typically denote fixed durations of time, meaning that each bar typically contains notes adding up to the same duration.

Some other common time signatures are:

3/4, meaning '3 quarter notes', is found in waltzes and mazurkas.

Adding a dot after a note extends its duration by half its length.

You can also notate notes of different lengths using ties, which joins two notes together into one longer note:

Sheet music is designed to notate the 7 note 'diatonic' scale, but in western music we actually have 12 notes. The difference is made up by adding sharps and flats.

Adding a sharp raises the note by one semitone:

While adding a flat lowers the pitch of a note by one semitone.

For example, the following shows two instances of a common pattern; play a note, play the note above, then play the starting note again. First from G, then again from high D. As you progress you will be able to play such patterns without caring about the named value of a higher note. You just ascend to the next note in the scale, then drop back down again.

Once you get some practice reading sheet music is actually easier than reading tabs. Instead of having to process the positions of every finger, you can discern where the melody is going by reading the shapes formed by the notes on the page.

Getting started improvising on the ocarina